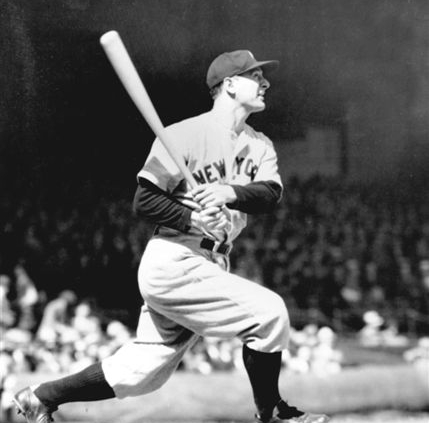 This article was selected for inclusion in SABR 50 at 50: The Society for American Baseball Research’s Fifty Most Essential Contributions to the Game. 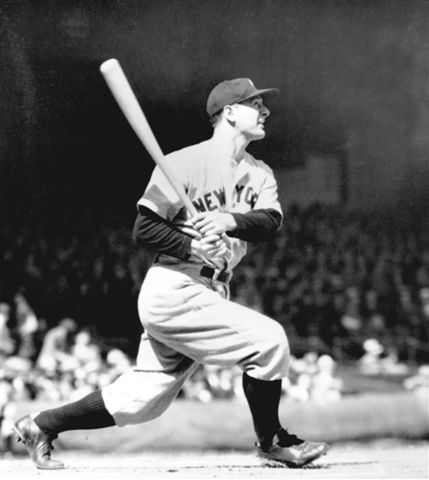 In his Hall-of-Fame career, Lou Gehrig established himself as a premier RBI producer. According to the 2012 edition of The Elias Book of Baseball Records, Gehrig led the American League in runs batted in five times: 1927, 1928, 1930, 1931, and 1934. Furthermore, according to Elias Gehrig holds the American League records for most RBIs for both a single season and lifetime.1 However, as it turns out, many of the RBI statistics in Gehrig’s official baseball records are erroneous. In a previous Baseball Research Journal article (Fall 2011), I presented my research on Lou Gehrig’s RBI records from 1923 through 1930. I reported that I discovered—and corrected—more than 30 RBI errors in his official baseball records, including his AL-leading seasons of 1927, 1928, and 1930.2

In this article I present the results of my research for the second half of Gehrig’s major league career, covering the seasons 1931 through 1939. Again, my research has demonstrated that Gehrig’s official RBI records are afflicted with several errors.3

In order to ascertain an accurate RBI record for Lou Gehrig, I applied the most rigorous approach: obtaining the complete details for every run scored by the Yankees in all games Gehrig played.

“Complete details” means the following three facts were determined for each run-scoring situation: 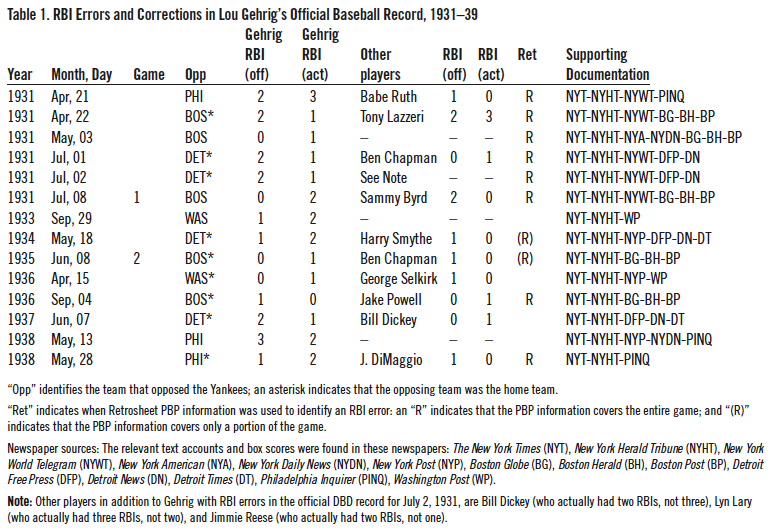 Altogether, there were 51 games for which I was unable to acquire complete details. However, for each of these 51 games, the box score RBI information is identical to the RBI statistics in the official baseball records, suggesting that it is highly likely that the official information is accurate.

By comparing the run-scoring and RBI information presented in the unproofed Retrosheet PBP accounts and the various newspaper articles (including box scores), I identified discrepancies with the RBI statistics given in the official DBD records. Next, I resolved the discrepancies by carefully examining the game descriptions presented in multiple newspaper accounts. Then, I provided my conclusions and the supporting documentation to Retrosheet’s Tom Ruane and Dave Smith for their review of the evidence and their assessments of my conclusions. I also provided the identical information to Pete Palmer, whose database is utilized by some baseball websites and the most-recently published hardcopy baseball encyclopedias. For those who would like to examine the evidence, the supporting documentation for the corrections to Gehrig’s official record is provided in the Supplementary Material, available on the SABR website here.

1923–30: Two adjustments to the RBI record presented in my previous article need to be made.

First, for the 1926 season, I actually discovered and corrected ten, not nine, RBI errors in Gehrig’s official baseball record. I inadvertently neglected to include the RBI-error game on July 20, 1926. For this game, baseball’s official Day-By-Day (DBD) records (compiled by the Howe News Bureau, the official statistician for the American League during Gehrig’s career) show Gehrig with one RBI and Babe Ruth with two. In actuality, Gehrig had zero and Ruth three. This results in Gehrig’s season total for 1926 actually being 109 RBIs (not 110 RBIs as previously claimed). Second, for the 1928 season, Retrosheet deemed that the official DBD record is correct for the second game of the doubleheader on July 26, 1928. Gehrig did have only one RBI (not two) in this game. Thus, Gehrig’s season total for 1928 is actually 147 RBIs (not 148 as previously claimed). 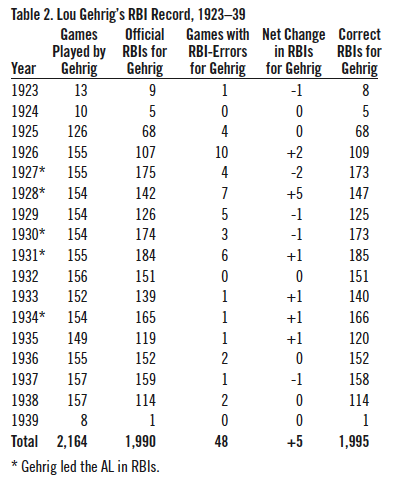 1931: As described in a presentation given at the annual national SABR Convention in 2011, Trent McCotter discovered and corrected five games with RBI errors involving Lou Gehrig.4 Subsequently, I carried out an independent review of the runs scored and RBIs by the players on the 1931 Yankees. In addition to corroborating McCotter’s findings for Gehrig, I also discovered and corrected yet another RBI error for Gehrig—in the game on May 3, 1931. (See Table 1.) The net result of correcting these six RBI errors is plus-one RBI for Gehrig. Thus, Gehrig’s season total for 1931 is actually 185 RBIs, not 184 as shown in the official records. (See also Table 2.)

1932–39: My research revealed that Gehrig was involved in eight games with RBI errors in during the 1932–39 seasons. As indicated in Table 1, there was at least one RBI-error game for Gehrig in each of his full seasons except for the 1932 campaign. Table 2 presents the consequences of correcting the RBI errors I discovered.

As previously mentioned, the evidence in support of correcting the RBI errors I discovered in Lou Gehrig’s official baseball records is compiled on the SABR website under Supplemental Material. This documentation was provided to Retrosheet (specifically Tom Ruane and Dave Smith) and Pete Palmer. Both agreed with the conclusions I reached with regard to correcting the RBI errors in Gehrig’s official records.5, 6 Retrosheet has already implemented the corrections in the box score file and Gehrig’s daily file; Palmer indicated that he would be making the changes after the conclusion of the 2012 season. 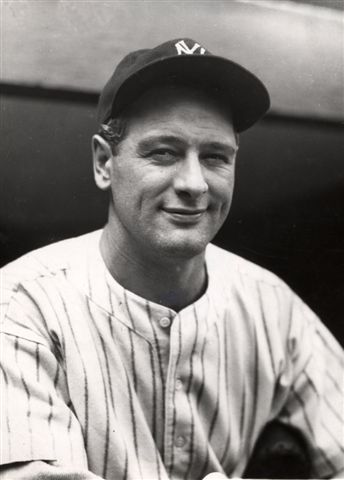 With regard to the Elias Sports Bureau, they have not yet taken a position on corrections of the RBI errors in Gehrig’s official baseball record for the 1931–39 seasons. In the 2012 edition of The Elias Book of Baseball Records, Gehrig is shown with league-leading RBI totals of 184 in 1931, and 166 in 1934. As shown in Table 2, according to my research, Gehrig actually had 185 RBIs in 1931 and 166 RBIs in 1934. Whether or not Elias updates future editions of the book remains to be seen, however, subsequent to the publication of my previous research on Gehrig’s RBI record, 1923–30, Elias did incorporate the corrections for Gehrig’s league-leading RBI totals for the 1927, 1928, and 1930 seasons in the 2012 edition.

Gehrig’s lifetime total is also affected by my findings. According to my research, Lou Gehrig accumulated a total of 1,995 RBIs in his career, five more than the 1,990 given in the official baseball records (See Table 2). The official website of Major League Baseball (MLB.com) has Gehrig credited with 1,995 RBIs, but not because of the needed corrections. MLB.com’s 1,995 lifetime total is merely fortuitous because the site has erroneous RBI stats for each of Gehrig’s individual seasons (except for 1924, 1929, 1936, 1938, and 1939). It remains to be seen when/if the correct RBI statistics will be included on MLB.com. The 2012 edition of The Elias Book of Baseball Records states that Gehrig holds the American League record for most career RBIs with 1,994. Previous editions showed Gehrig with other lifetime totals7:

To facilitate consideration of corrections to Gehrig’s RBI totals on MLB.com and in The Elias Book of Baseball Records, the final draft of this manuscript (including the Supplementary Material) was provided to John Thorn, the official historian for Major League Baseball, and Seymour Siwoff, president of the Elias Sports Bureau, the official statistician for Major League Baseball.

It is with tremendous gratitude that I thank the following people for their outstanding cooperation in helping me carry out the research for this article: Freddy Berowski, Cliff Blau, Steve Boren, Keith Carlson, Bob McConnell, Trent McCotter, Pete Palmer, Tom Ruane, Dave Smith, Gary Stone, and Dixie Tourangeau. And, special thanks to the “Retrosheeters”—all the people who volunteer their superb efforts to produce the database for Retrosheet—enablers of baseball research. Supplemental Material can be found online at http://sabr.org/node/25736.

HERM KRABBENHOFT, a SABR member since 1981, is a retired research chemist. His baseball research has focused on ultimate grand slam home runs, leadoff batters, triple plays, the uniform numbers of Detroit Tigers, and most recently, consecutive games streaks for scoring runs and batting in runs—which requires having accurate game-by-game runs and RBI statistics—which requires correcting the runs and RBI errors in baseball’s official records. His other articles on RBI records in the “Baseball Research Journal” can be found here: “Hank Greenberg’s American League RBI Record” (Spring 2012); and “Lou Gehrig’s RBI Record: Striving To Get It Right Thanks to 40 Years of Research by SABR Members” (Fall 2011).

2 Herm Krabbenhoft, “Lou Gehrig’s RBI Record: Striving To Get It Right Thanks to 40 Years of Research by SABR Members”, The Baseball Research Journal 41 (Fall 2011), 12.