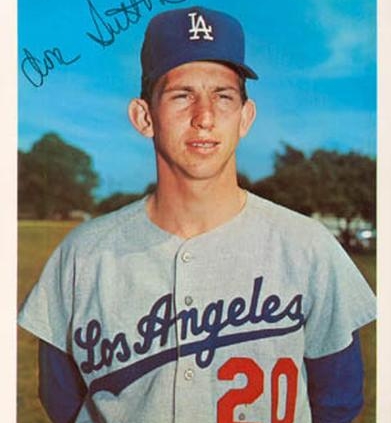 “I never wanted to be a superstar, or the highest paid player,” Don Sutton said. “[A]ll I wanted was to be appreciated for the fact that I was consistent, dependable, and you could count on me.”1 By that measure, Sutton achieved his goal and more, as few pitchers in baseball history were as reliable, and as healthy, for as long as the right-hander.

During his 23-year major-league career with the Los Angeles Dodgers and four other teams from 1966 to 1988, Sutton logged at least 200 innings in 20 of his first 21 seasons, a remarkable stretch interrupted only by the strike-shortened campaign of 1981; and struck out at least 100 batters in 21 straight seasons, a feat subsequently duplicated only by Nolan Ryan, Greg Maddux, and Roger Clemens.

Sutton’s 324 wins, 58 shutouts, 3,574 strikeouts, and 5,000-plus innings pitched secured his enshrinement in the Baseball Hall of Fame in 1998. The outspoken, cerebral competitor spent the rest of his life as a respected baseball broadcaster, calling games mostly for the Atlanta Braves for nearly three decades until his death at the age of 75 on January 18, 2021.

Despite those gaudy “counting statistics,” Sutton wasn’t flashy or overpowering and was rarely mentioned among the best pitchers of his era. He received votes for the Cy Young Award in only five separate seasons, all of which came during a five-year period (1972-1976), when he finished in the top five in the NL; and he won 20 or more games in a season just once. Sutton never put together a career-defining season with eye-popping statistics and never authored a no-hitter.

But from the moment the Alabama native arrived at Dodger Stadium as a rookie in 1966, he was a solid, dependable starter for manager Walter Alston. He won 12 games and pitched 225 2/3 innings in his first season to help lead the Dodgers to the National League pennant. Over the next 15 seasons, Sutton never failed to reach the 200-inning mark and appeared in three World Series for Los Angeles in 1974, ’77, and ’78.

After signing with the Houston Astros as a free agent in 1981, he was traded to the Milwaukee Brewers the following year and won four games down the stretch — including a dramatic winner-take-all season finale against Jim Palmer and the Baltimore Orioles — to lead “Harvey’s Wallbangers” to the 1982 AL East crown. He started three games in the postseason as the Brewers fell in a seven-game fall classic to the St. Louis Cardinals.

Sutton moved on to the Oakland A’s and then the California Angels, where he won his 300th career game on June 18, 1986, a dominant three-hit complete game against the Texas Rangers. The 41-year-old right-hander went 15-11 as the Angels captured the AL West title, and Sutton’s gutty Game Four performance helped put California on the brink of the World Series before the Boston Red Sox rallied to win the pennant in seven games.

Sutton returned to the Dodgers in 1988 for his final season on the mound, but was released in August after 16 starts. He moved up into the team’s broadcast booth and then joined the Atlanta Braves’ TV and radio team in 1990, where his folksy, Southern-bred stories and astute pitching analysis could be heard by fans across the country on the TBS superstation. He was a fixture in the booth for the Braves’ dynasty years in the 1990s and after a two-year stint with the Washington Nationals in 2007-08, he returned to Atlanta to spend the rest of his career behind the microphone.

“With apologies to Lou Gehrig, I’m the luckiest man on the face of the earth,” Sutton said when he was inducted into the Braves’ team Hall of Fame in 2015. “I have everything in life I’ve ever wanted.”