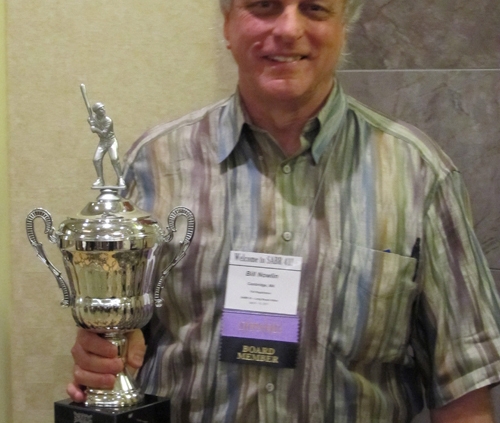 LIVE FROM LONG BEACH — Bill Nowlin, who has authored more than 20 books on the Boston Red Sox and hundreds of articles for SABR’s Baseball Biography Project, was announced as the winner of the 2011 Bob Davids Award during the SABR 41 Awards Luncheon on Friday at the national convention.

“There’s never been a book I’ve written by myself,” Nowlin said. “I may be the only name as the author, but the main collaborators are in this room.

“This is a wonderful honor … (and) a wonderful community. It’s great to be able to collaborate with everyone.”

Nowlin’s well-known bent for Red Sox research prompted the biggest laugh of the ceremony, when SABR President Andy McCue responded to Nowlin’s request for suggestions on new topics to pursue by quipping, “How about the Yankees?”

Mark Armour, director of the BioProject, introduced Nowlin during the Awards Luncheon. His introduction appears below:

In 1970, Bill Nowlin co-founded Rounder Records, which has been one of the country’s most respected and decorated independent record labels for more than four decades. Bill could have left it at that, could have allowed his contribution to our culture to rest with his company’s 4,000 record albums that have earned countless Grammy awards.

More than twenty years into his music career, Bill began to tap into his lifelong love of baseball and especially his love for the Boston Red Sox. He published his first book, on Ted Williams, in 1997 and has since published more than twenty others, each more detailed and well-researched than the last. He has also written dozens of articles for newspapers, magazines and other concerns.

Bill naturally found his way to SABR, and his efforts in this organization have been even more impressive. In addition to regular contributions to our journals, he has served for several years on the Executive Board and has played an active role in the Boston Chapter. He regularly presents at local meetings, all over New England and beyond. He is involved with several research committees and has been active with the Scouts Committee and the Oral History Committee, among many others.

In 2004, Bill submitted his first article for the Baseball Biography Project, on Roland Hemond. Earlier this year, the project published Bill’s 187th biography, a number which does not include his many collaborative efforts. In 2005, Bill helped shepherd a book of biographies on the 1975 Boston Red Sox and has led many other similar efforts. For the past several years, he has been heavily involved in the management of the BioProject, especially by directing or aiding in the publication of nine books, with several others on the way.

Truthfully, there is very little that goes on with the project that Bill does not have a hand in, as his overrated project director can attest. Despite this proclivity for activity, it is important to stress the quality of Bill’s research, his use of primary sources, his attention to detail, his insistence on getting the story right. He is a very generous member of this Society with both his time and with his work. Bill sees every SABR member as a potential researcher and will work with anyone who wants any contribution. He does all of this — the researching, the writing, the collaborating — with good humor, never losing sight of the fact that what we all do here is supposed to be fun.

For all these reasons and more, our committee feels justified in its selection. It is my extreme pleasure to present the 2011 Bob Davids Award to my colleague and friend, Bill Nowlin.

SABR 41 Media Panel: Where to Find Baseball Information in the Future