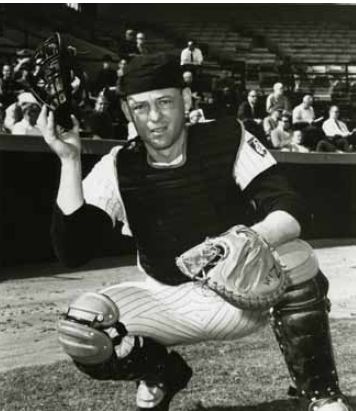 Around the time that Robert Zimmerman, a/k/a Bob Dylan, left Minnesota to start the world of music achangin’, Jerry Zimmerman arrived there to play for the Twins. And although Jerry could only hit a home run if the ball was blowing in the wind (three career homers), he provided steady defense and a relaxing clubhouse presence as a catcher for seven seasons with the Twins after one season with the Cincinnati Reds. Upon ending his playing career, he went on to serve as a major-league coach, scout, and, for part of one game, as an umpire.

Gerald Robert Zimmerman was born on September 21, 1934, in Omaha, Nebraska, the son of Leonard (L.P.) and Helen Zimmerman. L.P. was a motorman, who moved his family to Milwaukie, Oregon, just outside Portland, when Jerry was a boy.1 Jerry was an excellent baseball player at Milwaukie High School, where his four-year batting average of .425 caught the attention of scouts, as did his .625 average during his senior year.

Zimmerman attracted attention from 14 of the 16 major-league clubs, and allowed them to conduct a bidding war while he played semipro ball the summer after he graduated.2 The Boston Red Sox eventually won the auction, and West Coast scout Charley Wallgren signed Zimmerman on June 6, 1952, for a reported $80,000 signing bonus. The offers poured in until the day he signed.

The 17-year-old Zimmerman’s first stop was with the San Jose Red Sox of the Class C California League. His .625 high-school average soon became a memory as he adjusted to professional pitching; he hit .230 in 72 games with no home runs. His second stop was the altar, when he married Phyllis Ellen Turney on October 24, 1952. They went on to have four children, sons Jeff and Joe and daughters June and Karen.4

The Red Sox kept Zimmerman in San Jose in 1953. His numbers improved slightly; in 101 games, he had a .265 average with two home runs. His offensive improvement was offset by the 13 errors he committed behind the plate. Looking at the package as a whole, the Red Sox demoted him to the Corning Red Sox of the Class D Pennsylvania-Ontario-New York league for 1954.

Zimmerman responded well to the demotion, batting over .300 for the only time in his professional career (.302) and setting career highs in triples (4) and home runs (7). The Red Sox were pleased enough with his play to promote him to Class B, and his ping-ponging across the country continued with the Greensboro Patriots of the Carolina League for 1955. Here he batted a respectable .275 with six home runs.

Beginning in 1956, Zimmerman’s minor-league career was all “A’s,” as he began moving up the higher rungs of the minor-league ladder. That year he played for the Albany Senators of the Class A Eastern League. The following season saw the Red Sox promote him to Double-A, with the Oklahoma City Indians of the Texas League. In 1958 he advanced to Triple-A with the Minneapolis Millers of the American Association, the Red Sox’ top farm team at the time. here he began a long association with Millers player-manager Gene Mauch.

The 1958 Millers had a successful if unremarkable season, but they followed it up with an incredible playoff run in which they won 11 straight games on their way to the Junior World Series title. They finished in third place with an 82-71 record and Zimmerman hit only .250 with two home runs and 16 RBIs in 57 games. But the top four teams in the league made the playoffs that year, and the Millers were pitted against the Wichita Braves. After falling behind two games to one against the Braves, the Millers roared back on the strength of their pitching to win three straight games and the series. They then swept the Denver Bears in four straight to win the American Association championship, and then repeated the feat against the International League champion Montreal Royals to take it all in the Junior World Series. Zimmerman contributed throughout the playoff run, including a .357 average in the final.

“The power hitting of big Art Schult, the catching of Jerry Zimmerman, the inspired defense and pitching and the stick work of newcomer Stu Locklin were the prime factors in the surge which astonished both leagues,” wrote Halsey Hall.5

Zimmerman’s glory was short-lived. The 1959 season was his eighth in the minors, and it was evident to the Red Sox that their one-time hot prospect had cooled off considerably, especially when he began the year hitting .186 after 20 games. They released him on July 16 but he wasn’t unemployed for long as the Orioles signed him that same day. Once they got their man, the O’s sent him to the Vancouver Mounties of the Pacific Coast League. In 44 games there, he hit a meager .176, but made only one error behind the plate. Not impressed by his numbers, the Orioles released him on September 25, 1959. He again avoided the unemployment line, because the Cincinnati Redlegs came calling, signed him the same day, and had him report to the PCL’s Seattle Rainiers for the 1960 season.

Maybe it was because the move to Seattle from Vancouver wasn’t very difficult, but whatever the reason, Zimmerman had a decent season in 1960, batting .279 with six home runs in 82 games. The Reds thought enough of those numbers to bring him up to the majors in 1961.6

After nine years of perseverance, Zimmerman finally got to experience the thrill and tension of appearing on a major-league field for the first time on April 14, 1961, when he put on the tools of ignorance for the bottom of the ninth in the Reds’ 7-3 win over St. Louis. He got his first two major-league hits and scored his first runs on April 30.

The Reds employed enough catchers to form a chorus line in 1961 (six different men played the position during the season) with Zimmerman appearing in more games (76, with 64 starts) than any of the others.7 The players were not known for their offense — the position produced only four home runs all season — but for whatever reason it worked.8 The Reds won the National League pennant with a 93-61 record, four games ahead of the second-place Los Angeles Dodgers. Their pitching staff was third in the league in earned-run average (3.78), second in fewest earned runs allowed (576) and tied for first in shutouts (nine), in part because the catchers excelled at calling pitches.

The Reds faced the New York Yankees of Roger Maris (61 home runs) and Mickey Mantle (54 home runs) in the 1961 World Series. Even with Mantle appearing in only two games due to injury, the Reds were no match for the Bronx Bombers, who won the Series in five games. Reds manager Fred Hutchinson alternated Darrell Johnson and Johnny Edwards behind the plate, and Zimmerman appeared in only two games as a late-inning defensive replacement. He never had a plate appearance.

The Reds decided that too many catchers were spoiling the pot and traded Zimmerman to the Minnesota Twins on January 30, 1962, for reserve outfielder Dan Dobbek. Zimmerman got to practice his pine-riding during 1962 and 1963 in Minnesota because the team’s regular catcher, Earl Battey, was an All-Star both those seasons. Zimmerman appeared in only 73 games over those two years and batted .254 with no home runs and a total of only 10 RBIs. However, low batting numbers aren’t always an indication of a player’s value to a team. In 1964 the Twins had an offyear, with a 79-83 record after back-to-back 91-win seasons, but they led the American League in runs scored (737) and home runs (221). They didn’t need to look to Zimmerman for offense (he hit .200 in 63 games with 12 RBIs), but even as a backup player, he had a positive clubhouse influence. He was very popular with his teammates because of his sense of humor and his quiet acceptance of his backup role.

“His teammates have been visiting (his locker) in clusters for years,” wrote Max Nichols in The Sporting News. “In fact, Zimmerman’s corner has long been a place of rest and quiet conversation after games, possibly a retreat from writers who continually pump the stars for quotes.”9

The Twins came back with a vengeance in 1965, going 102-60 and winning the American League pennant. Zimmerman proved to be a good-luck charm, as injuries to Battey gave him the chance to catch 43 of the team’s first 75 games — and the Twins won 31 of them. Manager Sam Mele knew, though, that Zimmerman was more than a talisman.

“I’ve said before that Zimmerman is the best receiver in the American League,” said Mele. “He doesn’t hit for a high average, but he helps you in other ways with his bat, moving runners around.”10

On June 6 Zimmerman hit a ball where no ball off his bat had gone before, as he smacked his first major-league home run, a two-run shot, in front of the hometown fans. He blasted another homer in 1966 and a third in 1967.

As in 1961, Zimmerman saw little action in the 1965 World Series, which the Twins lost to the Los Angeles Dodgers in seven games, appearing only as a late inning defensive replacement in Games 3 and 4. He did get to the plate once, grounding into a double play to end Game 3.

The 1966 season was more of the same for Zimmerman as he only played in 60 games and batted .252. However, things changed considerably for him in 1967, when he ended up with more work than he could handle. When the season began, Zimmerman had taken on the role of bullpen coach in addition to his duties as backup catcher; this meant a higher salary plus a single room on road trips. That situation became problematic when Battey ended up spending considerable time out of the lineup because of injuries and poor play. As a result, Zimmerman played in 104 games that year, by far the most in his career, but he spent a lot less time in the bullpen than was expected. Perhaps the extra workload was more than he was used to because his batting average plummeted to .167.

Battey retired after the 1967 season, but if Zimmerman had any hopes of becoming the regular catcher, they were dashed when the Twins traded for John Roseboro in November of that year. Zimmerman appeared in only 24 games in 1968, but was still busy on the field continuing in the part-time role of bullpen coach.

The Twins released Zimmerman after the 1968 season, and he was going to become manager of the brand-new Seattle Pilots’ farm club in Billings, Montana, when an old friend came calling. Gene Mauch, Zimmerman’s manager when he played for the Minneapolis Millers, was piloting the expansion Montreal Expos and hired him as the team’s first-ever bullpen coach. They worked together in Montreal until Mauch was fired after the 1975 season. The two continued on back to Zimmerman’s old stamping grounds in Minnesota while Mauch was skipper there from 1976 to 1980.

Zimmerman got a taste of the manager’s life for two games in August 1978 when Mauch was hospitalized with a foot infection. He went 1-1, beating the Seattle Mariners 10-2, then losing to them the next night, 4-1. That same month, he had an unusual experience for a coach; when the umpires went on strike on August 25, Zimmerman helped the two amateur umpires hired to call the game by donning the blue at third base for one inning in a game against the Blue Jays in Toronto. Just to keep things fair, Blue Jays coach Don Leppert manned second. The coaches returned to their respective benches when a third amateur umpire arrived in the second inning.

After leaving the Twins, Zimmerman went on to scout for the New York Yankees and the Baltimore Orioles. He had only recently retired when he died of a heart attack on September 9, 1998, in Neskowin, Oregon, at the age of 63.