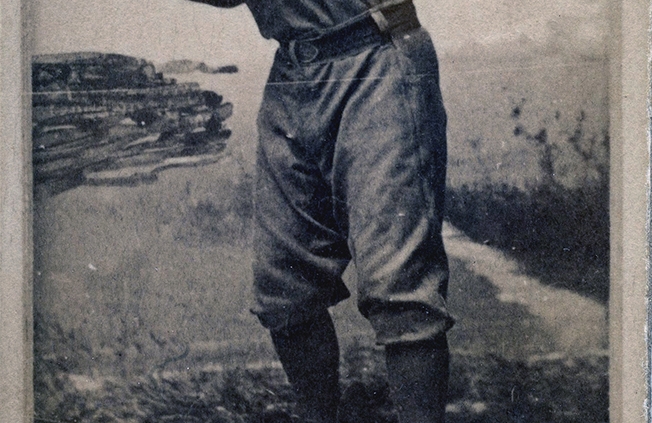 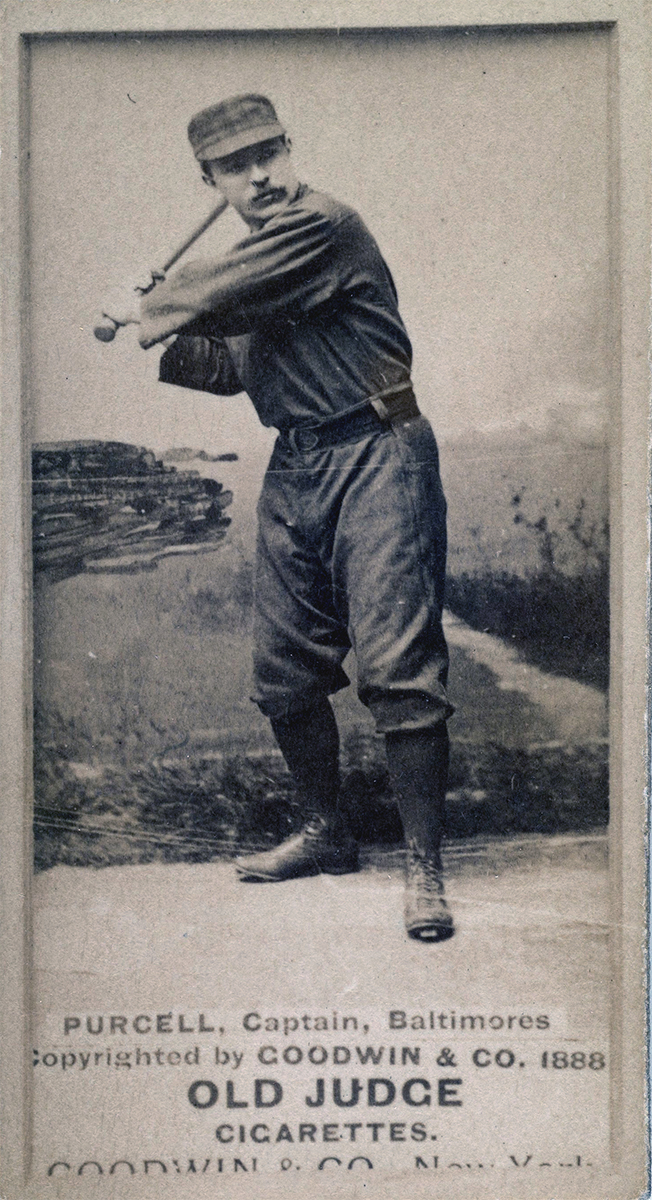 William Aloysius Purcell played and managed in the major leagues from 1879 through 1890 — but as one author quipped, “‘Blondie’ Purcell is better remembered for the color of his hair than his record as a manager.”1 Purcell also showed a willingness to cause trouble along the way. He later became a bookmaker and his death details remain a mystery to this day.

Purcell was born somewhere in New York on March 16, 1854, to Irish parents James, a laborer, and Mary, a homemaker.2 James was born in 1835 and Mary was born in 1837.3 Purcell grew up in Paterson, New Jersey, which — despite having a population of only 33,000 — was a hub of baseball talent in the mid-1870s. Purcell was the captain of a baseball club there named the Keystones, which produced at least five major leaguers from this era — Purcell, star pitcher Jim McCormick, the cleverly-nicknamed Kick Kelly and The Only Nolan, as well as future Hall of Famer King Kelly.4 “Purcell was a cranky sort of a boy at that time, but he could play great ball. He used to be all over the field and kicked very strong when vigorous kicking was needed,” King Kelly later wrote in a guest column for the Boston Globe.5

Purcell’s professional debut came in 1877, when he split the season between two League Alliance teams, Binghamton and Buffalo. He stayed in upstate New York in 1878, playing for the International Association franchise in Utica. Purcell made a memorable impression on at least one young boy there, who wrote a letter to the Paterson Morning Call as an adult in 1940, reminiscing that “Many times I trotted at (Purcell’s) side or at his heels from the ball grounds, to where he put up talking about the game.”6

Blondie signed with the National League’s Syracuse Stars and made his major-league debut on May 1, 1879, in Chicago against Cap Anson’s White Stockings. On that cold, windy, sunny day, Purcell started in center field and went 0-for-4 with a walk and a run scored in Syracuse’s 4-3 loss at Lake Front Park. One newspaper called it “as hard-fought a contest as ever was seen in this city.”7 Some of the 1,500 spectators must have been surprised that the White Stockings players didn’t wear matching socks.8

Purcell joined Cincinnati during the 1879 season after Syracuse folded. He was one of six Reds players to travel west that fall on a baseball tour through California. The roster of touring players included well-known National Leaguers from other teams, like Buffalo’s Pud Galvin. The five-week trip was a failure, as the group couldn’t consistently find full teams to play against. And when they did, the major-leaguers had to let balls drop on purpose to make the California amateurs feel like they were competing. Low ticket sales didn’t make enough to cover expense — the entire venture lost six thousand dollars, and the touring players were stranded in San Francisco until the Reds wired money to pay for transportation home.9 “From the accounts given by the six above-named (Cincinnati players), the ‘national game’ isn’t in high repute in California.”10

Purcell stayed with the Reds in 1880, started 1881 with the Cleveland Blues, and was obtained by the Buffalo Bisons at midseason. He stayed with the Bisons through the end of the 1882 season.

One of those 1882 games earned Blondie another nickname, “Cut-the-Ball.” It was a rainy day in Providence on June 6, and Buffalo’s pitcher was having difficulty gripping the ball because it was too wet, but umpire Joe Quinn refused to take the soggy ball out of play.11 12 When a Providence batter grounded the slick ball foul down the left field line in the seventh inning, Purcell jogged over, picked up the ball, pulled out a knife and sliced the ball in half, forcing the umpire to introduce a new ball.

“(Purcell) might have got away with his bluff had not the umpire caught a glimpse of the outlines of a large-sized pocket knife in the pistol pocket,” the Buffalo Enquirer reported. “The umpire considered the evidence of guilt conclusive and Blondie’s explanations and protestations of innocence had no weight in that court.”13 The National League fined Purcell $10 for the stunt, a sizable sum for a ballplayer in 1882. “His act created such controversy that the ball was put on display in the window of the Providence Journal.”14

Purcell’s name is sprinkled throughout the early history of the Philadelphia Phillies. Team owner Al Reach signed Purcell to play for the new National League club in 1883 and Blondie became the Opening Day left fielder on May 1 at Philadelphia’s Recreation Park. Facing Providence ace Old Hoss Radbourn in the first inning, Purcell struck a single to left-center field, the first hit in Phillies history.15 He later scored on a groundout, tallying the first run in Phillies history. A crowd of 1,200 witnessed Providence’s 4-3 victory, which took only one hour and 30 minutes to complete and used only four baseballs.

The 1883 Phillies lost 13 of their first 17 games and made an early-season managerial change, replacing Bob Ferguson with the 29-year-old Purcell. There are varying reports on who made the switch. The “precipitous action was either initiated by Reach (due to a lack of success on the field), Ferguson himself (he was tired of losing) or by the rest of the players, who were tired of Ferguson.”16

Ferguson stuck around to play second base and run the club’s business office. The Phillies went 13-68 under Purcell in the first managerial stint of his career.

Purcell stayed with the Phillies in 1884. He then played for the cross-town Philadelphia Athletics of the American Association in 1885, but “was released in August when his drinking interfered with his play to the extent that he began dropping easy fly balls.”17 After that he joined the National League’s Boston Beaneaters for 21 games before they released him too.

In 1886, he took a second swing at managing, serving as the player/manager of the Class B Atlanta Atlantas. After clinching the 1886 Southern Association championship in late August, Purcell traveled north and played for the Baltimore Orioles for the final month and a half of the American Association season.

Purcell’s rowdy behavior extended beyond the field. For example, he and four Orioles teammates went to a theater in St. Louis after their scheduled game there got rained out on September 27, 1886. They bought balcony tickets for 50 cents each and four of the five Orioles were satisfied with their elevated view. Purcell was the exception; he snuck down and sat in a lower-level seat.

Ushers politely asked him to return to the balcony but “Purcell refused to budge out of his seat, and when told that he would be forcibly ejected, he remarked that it would take just four men to put him out. The bouncer at the Grand opera house is a pretty healthy specimen, and when the fair haired left fielder refused to vacate he took him by the collar and tore him, together with the seat, loose and carried him out by the neck. Bystanders say that Purcell’s tongue was hanging out so far they thought he had a red necktie.”18

In 1887, Purcell and his Orioles teammate Oyster Burns tied for the American Association lead with 140 games played. Purcell stayed with Baltimore for most of the 1888 season before his contract was purchased by the Philadelphia Athletics on September 20, bringing him back for his third stint with a major-league team in the City of Brotherly Love.

To the surprise of many, Purcell’s best two offensive seasons came with the Athletics at an age when his blond hair might have been turning gray. In terms of OPS, his best single season came at age 35 in 1889 (.763) and his second-best (.706) followed in 1890, when he was 36. Some reports attributed his mid-30s resurgence to a change in behavior. “Purcell of to-day and Purcell of 1885 are not the same man. When he was with the Athletic Club in 1885 his habits were not what they should have been, and, as a result, he played a poor game. But things have changed since then. He has not a bad trait now, and there is not a better right fielder in the Association than he.”19

Purcell’s long playing career ended abruptly. As described above, he hit well for the 1890 Athletics, but the organization was a disaster. The club had significant financial issues and there was additional dysfunction when a carpenter sued the club after he wasn’t paid for repairing the Jefferson Street Grounds ballpark. The Athletics were mired in debt and couldn’t meet player payroll on numerous occasions, so Purcell “joined most of his teammates in quitting outright.”20 He never played again.

Philadelphia became the laughingstock of the American Association after the roster turnover. The Athletics lost all 21 of their remaining games with a new cast of fill-in players, some of whom were picked up in road cities for only a day or two. One writer concluded that the 1890 Athletics were “The Worst Team in Major League Baseball History.”21

All in all, Purcell accumulated 1,217 major league hits in 1,097 games. He was primarily an outfielder but also appeared in 79 games as a pitcher, 52 as an infielder, and one as a catcher. One of Purcell’s on-field legacies is his bunting ability. “He would go to the plate and wear out the opposing twirler by bunting in the neighborhood of 50 fouls. Of course this happened before the foul strike rule was put into effect,” former Atlanta Atlantas president Steve Ryan explained to the Arkansas Democrat in 1907.22

Purcell had a memorable career, and his post-baseball life is just as intriguing.

“‘Blondie’ Purcell is a bookmaker at Gloucester, N.J., and will not play ball this year,” the Boston Globe reported in 1891.23 Blondie didn’t collect baseball bets, though; he focused on horses, taking bets at Gloucester Race Track and Brighton Beach Race Course in Brooklyn, New York.24 Orator Shafer and Taylor Shafer, former Athletics teammates, joined Purcell in this new bookmaking venture.

In 1895, Purcell’s grandfather passed away and left him $20,000, a large sum equivalent to more than $600,000 in 2020. “It’s dollars to doughnuts that Willie (Purcell) will get rid of it more rapidly than his grandpa accumulated it,” the Los Angeles Times joked.25

Purcell’s death details are still unknown — and it’s a mystery with its share of theories. A man named William Purcell died on February 20, 1912, in Trenton, New Jersey. Some websites list this as Blondie’s date of death, but the man in that casket was born around 1839, making it quite unlikely that it was the ballplayer who was still playing in the major leagues in 1890.26

Another candidate with the correct name, middle initial, birth state, father’s name, mother’s name, and approximate age died of heart trouble at the Gladstone Hotel in Los Angeles on July 25, 1908, a few weeks after he moved from New York for health reasons. However, it’s also unconfirmed that this man was the ballplayer.27

An Altoona (Pennsylvania) Tribune article from October 14, 1908, adds another wrinkle to the investigation. “Old time base ball players, who were once popular favorites in this city (Philadelphia), says the Philadelphia Ledger, will play a game on Thursday of this week for the benefit of Billy Purcell, once the hard hitting left fielder of the Phillies, a team made up of Southern league (sic) players to be opponents.”28 The newspaper didn’t elaborate if Purcell was alive or dead at the time of the benefit game.

In 1964, Purcell was elected to the Paterson Sports Hall of Fame in New Jersey.29

This biography was reviewed by Bill Lamb and Rory Costello and checked for accuracy by SABR’s fact-checking team.

In addition to the sources cited in the Notes, the author also used Baseball-Reference.com and Retrosheet.org.