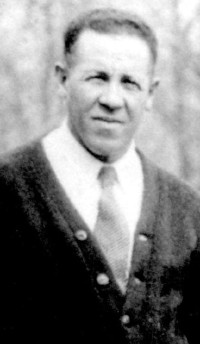 In 1922 Pittsburgh was invaded by a professional nine run by Dizzy Dismukes. In response Posey converted his part-time semipro outfit into a professional squad. Within a few years they were regularly beating the best clubs in black baseball and numerous college teams, as well as some in organized baseball. Soon, the club signed Oscar Charleston, Josh Gibson, and Judy Johnson and joined the organized black league. The Grays called two major-league stadiums home, Pittsburgh’s Forbes Field and Washington’s Griffith Stadium. Over the next two decades the Homestead Grays sat atop the world of black baseball, at one time capturing nine pennants in a row.

As a young man Cumberland Sr. took a job as a deck sweeper on a ferry which ran up and down the Ohio and Little Kanawha Rivers. He eventually studied the mechanics of ship engines which allowed him to seek employment as a riverboat pilot and engineer on the Ohio River, the first African-American licensed as such. He eventually settled in Harding Station and began constructing barges, becoming the proprietor of a large fleet. He expanded his financial portfolio with investments in various coal and coal-related companies and was one of the original investors in the Pittsburgh Courier, an African-American newspaper. Eventually, Cumberland Sr. became general manager of the Delta Coal Company and later owned the Preston Coal Company and the Diamond Coal and Coke Company. The latter became the largest black-owned business in Pittsburgh. He also invested in banking and real estate ventures.

See Posey, about three years older than his brother, was an organizer with the Monticello basketball team; he also played with the squad for many years. In baseball he worked as a business manager, traveling secretary, and booking agent for the Homestead Grays, and was associated with the club through much of the period 1920-1951.

Meanwhile, in 1909 Posey traveled to Pennsylvania State University to study chemistry and pharmacy. Basketball dominated his thoughts while at Penn State, but poor grades caused him to leave after two years. In 1913 he briefly attended the University of Pittsburgh and in 1915 enrolled at Holy Ghost College, now known as Duquesne University. He did so as a distinct minority—Posey, a light-skinned African-American, standing out in three primarily white colleges.

An extremely quick guard, Posey was one of the top black basketball players of his time. He was one of only a couple of pre-1915 black players who achieved lasting fame. After the spotlight placed on the man with his induction into the National Baseball Hall of Fame in 2006, Posey’s resume for induction into the Basketball Hall of Fame at Springfield, Massachusetts, was also reviewed in recent years. He was posthumously elected for his basketball accomplishments in 2016. Posey, 5-foot-9 and 140 pounds, copied the style of a local white player named Harry Hough, who was similarly a small, agile, and quick athlete. Posey believed Hough to be the greatest basketball player of the era.

It was in high school that Posey first gained a great deal of attention for his basketball skills. He also started coaching. In 1908 he led Homestead High to the city championship. At Penn State, Posey played basketball for two seasons beginning in 1909, making the varsity squad as a sophomore. In 1909 Posey with his brother See and some friends organized the Monticello (named for a Pittsburgh street) Athletic Association basketball club, also known as the Monticello-Delany Rifles, which played in and around Homestead. The club gained a following outside of Homestead when it defeated Howard University in 1911. The following year they won the Colored Basketball World’s Championship. In 1913 the club changed its name to the Loendi Big Five in recognition of its sponsor, the Loendi Social and Literary Club. By this time, it was a professional squad. Posey was the star player and operator, which included managing, booking, and promoting. Leondi played through 1925, copping the Colored Basketball World’s Championship four years in a row from 1920-23.

Posey also played basketball at Holy Ghost in 1915, leading the team in scoring. He performed under the name Charles W. Cumbert to preserve his athletic eligibility. He was also captain of the golf team at Holy Ghost. In 1925 he retired from basketball to concentrate on baseball, though he later formed a Homestead Grays basketball squad in 1927. It defeated the New York Celtics, a club that would win the American Basketball League championship that season.

The Homestead Grays baseball nine was originally formed in 1900 as the Blue Ribbons when a group of teenagers, some of whom worked in local factories and mills, decided to organize to play local white clubs and other company-based nines. Like most amateur and semipro clubs, they played primarily on the weekends. Eventually the club became semipro and changed its name to the Murdock Grays in 1910. At times they were an integrated squad. White future professionals Ziggy Walsh and Johnny Pearson played for the team. In 1912 the club became the Homestead Grays. Posey, a right-handed thrower and batter, had joined the club the previous year. His quickness made him a natural center fielder. He became captain in 1916 and field manager in 1917. Stemming from his experience with his basketball club, Posey started booking contests for the Grays by 1918 and was consequently named team secretary. In 1920 Posey and local businessman Charlie Walker, a former Grays batboy, purchased the club.

The Grays continued as a semipro outfit until 1922 when the encroachment of Dizzy Dismukes’ Keystones into the Pittsburgh area pushed the club to rework its salary structure. The Keystones proved to be the Grays first real competition in Homestead. Dismukes paid his men as professionals, so Posey and Walker decided to do the same. As one of the Grays’ players would describe the club’s management during the 1920s, Walker was the money behind the club and Posey was the brains.

Posey quickly signed Oscar Owens, Bobby Williams, and Sam Skeeter to kick off the revamped version of the Grays. For the first time Posey also secured use of Forbes Field, home of the Pittsburgh Pirates, in 1922. Over the following winter the Eastern Colored League was formed. It was east coast’s answer to the predominantly Midwestern Negro National League formed by Rube Foster in 1920. Posey and Walker chose not to participate in the ECL because it would seriously distract from their lucrative barnstorming schedule. Posey later claimed that he spent much of the 1920s being courted by both the NNL and ECL to join their ranks. The Grays, located in Pittsburgh, were desired because geographically they fell in between the two leagues.

By the mid-1920s, the Grays were regularly defeating most of their opponents, including clubs from the black pro leagues, white semipro and professional outfits, Ohio-Pennsylvania League clubs, and postseason barnstorming clubs which often fielded major leaguers. Posey would beef up his lineup against the stronger opponents. The Grays attracted competition from well outside their traditional base for games at Forbes Field. By 1926, they were dominating opponents, posting a 140-13 record, at one point winning 43 consecutive contests. They also won 31 straight in 1927.

The 1931 Grays are often identified as the top black team of all-time, notching a 163-23 record. In 1932 Posey founded and the Grays joined the East-West League, another one-season venture which collapsed in June that year. The EWL was the first league to merge the eastern and western clubs. When the league failed, Posey initiated a tirade against eastern booking agents, blaming them for the downfall. He also took a firm stance against the Pittsburgh Crawfords in relation to his EWL. Posey naturally wanted the Grays to dominate the Pittsburgh area, but the Crawfords were on the verge of developing a stranglehold. If the Crawfords wanted to join the EWL, Posey insisted on two outlandish conditions. First, he wanted a five-year contract that allowed the Grays to control the Crawfords’ local schedule and their roster and, secondly, he wanted See Posey installed as the Crawfords manager. Crawfords owner Gus Greenlee rejected the ridiculous terms. The tables were turned the following year as Greenlee spearheaded the new Negro National League, a league which would survive past the initial campaign.

At this point the Grays were in a precarious financial plight. The cross-town Crawfords were thus able to lure some of the Grays’ top talent including Charleston, Gibson, and Johnson. In 1934 Posey brought in moneyman Rufus “Sonny Man” Jackson, the reputed king of the numbers racket in Homestead, to financially stabilize the Grays. Jackson also owned and leased many of the area’s jukeboxes. He served as the club’s president and treasurer, but Posey continued to run the day-to-day operations.

With racketeer Jackson aboard the Grays joined the NNL in 1934, a league rife with gambling-based capital. The following year Posey relinquished his field manager responsibilities to Vic Harris after luring him back from the Crawfords. In 1937 Posey was named secretary of the Negro National League. The club moved into Griffith Stadium in Washington D.C. on a more or less a permanent basis in 1940. The Grays remained in the league through 1948, becoming the premier club in the game. They were able to regain Josh Gibson, who teamed with Buck Leonard to solidify the lineup. The club won nine consecutive pennants from 1937-45 and another in ‘48. This clearly marks them as the leading dynasty in the black baseball history.

Professionally, Posey worked fulltime with the federal postal service at Penn (Railroad) Station in Pittsburgh. After buying into the Grays, he quit the mail job in 1920 to devote himself to basketball and baseball. He also served for years as the athletic director for Homestead High. Through his Homestead Grays Athletic Club, Posey sponsored local baseball, football, basketball and boxing events. He was a member of the Homestead Board of Education from 1931 until his death. Posey furthermore penned a column for the Pittsburgh Courier, his father’s paper. The column was called “Pointed Paragraphs” from December 1931 to April 1936 and “Posey’s Points” from May 1936 until June 1945. He contributed numerous other articles as well, stemming as far back as his early basketball career.

Posey married Ethel Truman, a Pennsylvania native, in 1913. They had four girls. Their oldest daughter Ethel married longtime Grays pitcher Ray Brown at a home plate ceremony on July 4, 1935. Cumberland Posey died at Mercy Hospital from lung cancer on March 28, 1946, at age 55. He had suffered from the disease for more than a year and was confined to a hospital bed for the last three weeks of his life. He was interred at Homestead Cemetery.

Posey left half of the club to his widow though Jackson ran it. After the 1948 season the Grays once again became an independent club. Jackson died on March 6, 1949, from complications after a brain tumor operation. Ethel Posey and Helen Jackson, Rufus’s widow, took over administration of the club for a short time. It was then turned over to See Posey, who ultimately disbanded the Grays on May 22, 1951, citing “financial setbacks and the egress of the best Negro talent into organized baseball.”