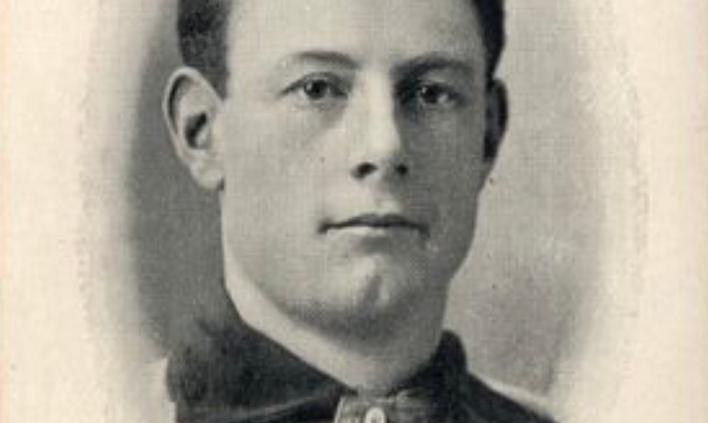 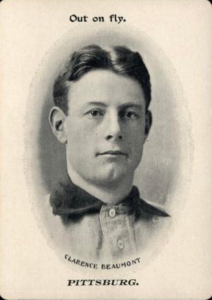 If Ginger Beaumont is remembered today, it’s usually for being the first batter in modern World Series history. In the early days of the Deadball Era, however, he was considered baseball’s finest leadoff man, a lifetime .311 hitter who was good enough to be named by both Bill Klem and Honus Wagner as the center fielder on their all-time teams. When contemporary observers spoke of Beaumont, they tended to focus on his surprising speed (he was once clocked from home to first in 4.4 seconds)—surprising because his typical playing weight was 190 lbs. on a 5’8″ frame. “He was an excellent base runner, being very fast on his feet, but nobody who saw him for the first time ambling along on his way to the batter’s box would admit this,” wrote sportswriter John Gruber. “A lazier or more indifferent-appearing player, emphasized by a burly body, could not be conceived. But when he hit the ball he was off like a streak, which astonished the uninitiated and made him one of the wonders of the century.”

Clarence Howeth Beaumont was born to Thomas and Mary (Jones) Beaumont on July 23, 1876, in Rochester, Wisconsin. A right-handed thrower who batted from the left side, he began his baseball career in 1896 as a semipro catcher, playing with teams from Rochester, East Troy, Waupun, Burlington, and Beloit College. Connie Mack, who was then managing Milwaukee of the Western League, signed Clarence to his first professional contract late in the 1898 season when the Brewers were hit by a rash of injuries. Because Mack needed an outfielder, Beaumont (whose speed made him a natural candidate) made the shift from catcher to fly chaser and batted .354 with 11 stolen bases in 24 games.

That performance didn’t go unnoticed by National League clubs, and Cleveland, Cincinnati, Pittsburgh, and Baltimore all expressed interest. After the season, Mack engineered a bogus sale of Beaumont to the Louisville Colonels to avoid losing him in the October draft (Barney Dreyfuss, who later became the young outfielder’s employer, returned him shortly thereafter), then traded him in December to the Pittsburgh Pirates for pitcher Bill Hart and third-baseman Bill Grey. An account of the trade referred to Clarence as a “brilliant and promising young player” and stated that Milwaukee fans “bid farewell to Beaumont with profound regret.”

Less than a year removed from semipro ball, the 22-year-old Beaumont began his big-league career primarily as a pinch hitter and spare outfielder under manager William Watkins. In late May, however, right-fielder Patsy Donovan replaced Watkins. Donovan gave Clarence a chance to play regularly, and by the end of June the rookie had nailed down the center-field job, much to the displeasure of the man he replaced, Tom McCreery, who was openly hostile to his young challenger until Donovan intervened. On July 22 Beaumont accomplished a feat that has yet to be matched, collecting six hits in six times at-bat and scoring six runs against Phillies lefthander Wiley Piatt. What is even more remarkable is that none of his safeties left the infield. For the season Beaumont batted .352, sixth in the NL, and stole 31 bases, but he wasn’t even the best rookie on the Pittsburgh team; that honor belonged to third-baseman Jimmy Williams, who batted .355 with considerably more power.

At the end of the 1899 season Barney Dreyfuss bought a half-interest in the Pirates and merged them with the best of his players from Louisville. The result was a powerhouse and the beginning of what Beaumont later referred to as “my happiest years in baseball.” Beaumont was Dreyfuss’ kind of player; he didn’t smoke or drink and devoted much of his free time to youth baseball in Pittsburgh. Up until then the speedy outfielder was usually known as “Clarry” or “Beau,” but Dreyfuss nicknamed him “Ginger” due to his red hair (though some claimed it was due to his speed and hustle), and the nickname stuck with Beaumont throughout his life.

In 1900 Ginger Beaumont suffered through a sophomore slump, batting just .279, but for the next five years he was one of baseball’s most dangerous hitters. In 1901 he finished among the NL’s Top 10 in batting average (.332) and stolen bases (36), and the following year he won the NL batting title with a .357 average while finishing first in hits (193), third in runs (100) and on-base percentage (.404), and fourth in total bases (226) and stolen bases (33). Beaumont had another outstanding season in 1903, batting .341 and leading the NL with career-high marks in runs (137), hits (209), and total bases (272). Of course the highlight of that season came on October 1 in front of 16,242 screaming fans at Boston’s Huntington Avenue Grounds. Stepping in to face the great Cy Young, Beaumont lofted a fly ball to center field that was caught by Boston’s Chick Stahl, thus becoming the first batter in the history of the modern World Series. For the eight-game Series Ginger batted .265 and led the Pirates with six runs scored.

Beaumont put together another strong season in 1904 when he batted .301 and led the NL for the third consecutive season in hits (185), but in 1905, though his .328 batting average ranked fourth in the NL, he began to suffer from knee problems that limited him to 103 games. The knee worsened in 1906, when Ginger appeared in only 80 games and batted .265 with just one stolen base. Concerned about Beaumont’s physical condition, Dreyfuss traded him and fellow veterans Claude Ritchey and Patsy Flaherty to the Boston Nationals in December 1906 for infielder Ed Abbaticchio. It was a trade that clearly benefited Boston. Ginger recovered in 1907 to play in 150 games and lead the NL for the fourth time in hits (187) while finishing third in the batting race with a .322 average.

Beaumont’s knee injury finally started to take its toll in 1908. The former speedster who in his prime had legged out numerous bunts and infield hits saw his running speed decline, and with it his batting average. Ginger batted in the .260s in both 1908 and 1909, and Boston traded him to the Chicago Cubs in February 1910 for rookie pitcher Fred Liese and cash. Beaumont spent the 1910 season as an extra outfielder and pinch hitter on the pennant-winning Cubs, batting .267 in 76 games. In his return to the World Series he appeared three times as a pinch hitter, walking once and scoring a run. Ginger didn’t get along well with manager Frank Chance, and the Cubs released him in March 1911. He finished his baseball career in 1911 with St. Paul of the American Association, batting .249 in a part-time role.

After leaving baseball, Ginger Beaumont concentrated on running his 180-acre farm in Honey Creek, Wisconsin, which he had purchased in 1904 (probably with his pay from the first World Series) and renamed Centerfield Farm. He and his wife, Norma (Vaughn) Beaumont, whom he had married in November 1901, enjoyed the “simple life.” They raised two daughters and one son and became fixtures in their community. In 1914 Ginger was elected a supervisor of Walworth County. He had saved his money during his playing career and by all accounts was comfortably well-off later in life. Ginger’s health began to deteriorate in 1948 when he suffered a stroke, and a second stroke in 1950 confined him to a wheel chair for the last years of his life. In 1951 Beaumont was inducted into the Wisconsin Athletic Hall of Fame as a charter member. Two stars of the 1903 World Series, Deacon Phillippe and Cy Young, unveiled his plaque at the ceremony.

Ginger Beaumont died at the age of 79 on April 10, 1956, in Burlington Hospital, near his Wisconsin farm. His obituary in The Sporting News called him “one of the game’s all-time great outfielders.” The Beaumont Little League in Burlington bears his name, and in 1968 the Old-Timers Athletic Club of Racine erected a flagpole and plaque in his memory. Beaumont was the subject of campaigns in the 1940s and 1980s for enshrinement in the National Baseball Hall of Fame, but at this point that supreme honor appears unlikely to come his way.