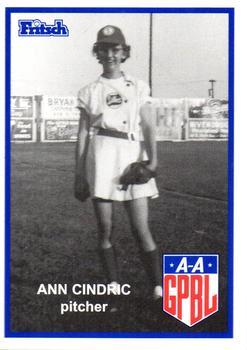 “In spring, a young woman’s fancy turns to baseball.”1

For Ann Cindric and the other talented women who played in the All-American Girls Professional Baseball League (AAGPBL), springtime meant oiling the glove and returning to the field to play the game they loved. Cindric was a right-handed pitcher who was active in the AAGPBL from 1948-1950, years that marked the height of popularity for the league.

Ann B. Cindric was born on September 5, 1922, in Muse, Pennsylvania, about 20 miles southwest of Pittsburgh.2 She was the third of John and Catherine (Yuric) Cindric’s five children.3 John and Catherine spoke Croatian and had married before emigrating from their homeland to the United States, in 1911 and 1914, respectively. Initially they settled in the coal mining town of Jere, West Virginia, which some sources list as Ann’s birthplace.4 After operations closed in Jere during the early 1930s, the remaining miners and their families fell into poverty.5 First Lady Eleanor Roosevelt visited the area several times to draw attention to the harsh living conditions.6

The Cindric family, however, had already become part of the Croatian community that settled in and around Pittsburgh to work in the mines.7 Muse was a company town for the H. C. Frick Coke Company owned by U.S. Steel. The Coke Company constructed the miners’ homes, owned the company store, and built schools for the children. Mining operations in the National Number 3 Mine at Muse began in 1922 and continued until 1954, when the mine was closed, and the last 500 miners were out of jobs.8

Life in Muse centered around the mine, the church, and sports, particularly baseball and soccer. “Smack in the middle of town was a large baseball field which was always well maintained by the coal mining company. … In the summer, the baseball games were the big event in town, and in the fall, it was soccer. All the small mining towns in that part of Western Pennsylvania had their own baseball and soccer teams, and the competition was very intense.”9

Cindric grew up playing ball in the neighborhood and watching games in the town. As she became a young woman, she was likely expected to follow a domestic path in life, according to the norms in the day. But when World War II began and men like her younger brother Nick were drafted into the service, the lives of women at home changed dramatically. They worked in the factories, planted the fields,10 and yes, played on the baseball diamond.

Women’s entry to professional baseball came about as the minor leagues began losing their players to the war draft and teams were disbanding. Baseball owners started looking for ways to maintain the public’s interest in the game and fill the local teams’ stands. Leading the movement, Philip K. Wrigley, chewing-gum king and owner of the Chicago Cubs, along with a group of Midwestern businessmen, established a new baseball league for women in 1943. The league came to be known as the All-American Girls Professional Baseball League (AAGPBL).11

Baseball scouts traveled around the United States and Canada to find the best female talent. Final tryouts were held in Chicago and 60 were chosen to be the first women professional baseball players. Fifteen players were assigned to each of the four inaugural teams: Racine (Wisconsin) Belles, South Bend (Indiana) Blue Sox, Kenosha (Wisconsin) Comets, and Rockford (Illinois) Peaches.12 Former major-leaguers like Bert Niehoff and Josh Billings were recruited to manage the teams, and to heighten interest among the fan base.13

After some initial resistance to women playing a “man’s game,” the teams were generally well-received in their host towns. Over time, the league grew in popularity and expanded to 10 teams. By the end of World War II in 1945, game attendance reached 450,000 for the season. But the end of the war didn’t mark the end of the AAGPBL. On March 29, 1948, Cindric was one of eight players signed from a tryout camp operated by former major-league infielder John Rawlings in Allentown, Pennsylvania.14 That year, AAGPBL attendance reached an all-time high of 910,000 fans.15

At age 26, Cindric was one of the older players to join the league, which recruited girls as young as 15 years old.16 Chaperones were assigned to each team to help guide the younger players and to ensure that all the women upheld the high moral and personal appearance standards expected by the league. Cindric and the other players had to follow strict rules of conduct that dictated their style of dress (never wear shorts or pants), hair length (long was preferable), cosmetics (always wear lipstick), and social engagements (no liquor drinking or swearing).17 Femininity always came first, even to the point of enduring painful “strawberry” scrapes when sliding into base in their short playing skirts.18

However, the benefits of playing in the league helped to offset the challenges. AAGPBL pay was considered good for the day, ranging from $65 to $125 a week.19 The income was important for young women helping to support family members back home, or to pay for college after their playing days were over.20 The AAGPBL also provided the players the opportunity to travel, build self-confidence, and develop lifelong friendships while playing professional baseball.21

After spring training in Florida, Cindric was assigned to the Muskegon (Michigan) Lassies in 1948. She was a right-handed pitcher who stood 5-foot-6 and weighed 135 pounds. She was nicknamed “Cindy” by her teammates and wore uniform number 13.22 About 600 women played in the AAGPBL during its 11 years in existence.23 Cindric became one of the 44 AAGPBL players from Pennsylvania.24

During Cindric’s rookie season, overhand pitching became the standard, opening up the pitcher’s repertoire to the curveball, drop pitch, and change of speeds fastball. Also in 1948, the pitching rubber was moved back to 50 feet from home plate, rather than the previous 43 feet. The ball was also made smaller, to 10 3/8 inches in circumference.25 (By 1954, the size of the baseball in the AAGPBL was the same as in the men’s game at nine inches around. The distance of the pitching rubber to home was also the same at 60 feet. But the distance between the bases remained shorter for the women, at 85 feet vs. 90 feet for the men.)26

In her first season, Cindric struck out 24 batters but did not record any wins or losses.27 After three appearances, she injured her finger and did not play again for Muskegon.28 The Lassies, however, earned a spot in the postseason after finishing in second place in the Eastern Division with a 67-58 record under manager Bill Wambsganss.29 In the first round of the playoffs, the Lassies lost to the Fort Wayne Daisies30, three games to one.31

In 1949, Cindric was assigned to the Springfield Sallies traveling team32 to continue her development. The Sallies, along with the Chicago Colleens,33 were “rookie” teams in the Eastern Division that traveled throughout states in the Central, Southeast, and Northeast to play exhibition games against each other.34 The league developed the teams to raise the AAGPBL’s visibility and recruit new players. But the 75-game schedule was grueling, with teams moving on to the next town every one to two days, sometimes at a long distance.35

No statistics are available to current researchers for Cindric from 1949. In 1950, Cindric was one of seven pitchers listed on the 20-player roster released by the Peoria (Illinois) Redwings ten days before their AAGPBL season opener.36 She wound up back with the Sallies, however, and appeared in five games with a 3-2 record. She also batted .231 (3-for-13).37 But a recurrence of her finger injury ended her season and her professional baseball career.38

After leaving the AAGPBL, Cindric played softball in Pennsylvania, Ohio, and West Virginia.39 On August 28, 1961, at the mother house of the Dominican Missionary Sisters in Chicago, she received her white habit and took on the religious name “Sister Mary Catherine.”40 Later, she entered the Dominican Order in Lancaster County, Pennsylvania. Cindric led a simple, contemplative life in the convent for five years.41 She chose not to renew her vows. Cindric then worked in a nursing home for 25 years until her retirement.42

Cindric enjoyed playing the button accordion and was a member of the International Button Box Club. She was also a member of the Slovenian National Benefit Society (SNPJ) Lodge 138. Ann Cindric was 88 when she died on December 18, 2010, in Pittsburgh.43

Cindric’s legacy, along with her league mates, lives on through the AAGPBL Player’s Association 44 and the National Baseball Hall of Fame exhibit, “Diamond Dreams: Women in Baseball.” The exhibit, expanded from the original 1988 display, includes the history of the AAGPBL from its beginnings in 1943 to its disbandment in 1954.45

Although their window of opportunity was short, the impact of these players’ dedication, talent, and professionalism is starting to become better appreciated. The popular 1992 movie A League of Their Own, with its famous line “There’s no crying in baseball,” introduced the AAGPBL to many people who had not heard about the league before.46 The movie was added to the National Film Registry in 2012 because it not only “illuminates this fascinating, under-reported aspect of American sports history, but also effectively examines women’s changing roles during wartime.”47 The 2022 Amazon Prime series, A League of Their Own, further explores the players’ stories on and off the field, and addresses societal issues of equality and acceptance that are still relevant today.48

But to many women of the AAGPBL, inclusion in the Hall of Fame is the highest honor. As commented on in the 1998 AAGPBL Newsletter: “If we never do anymore, we have gotten our display there for all America to see. Every man, woman, boy and especially the girls that travel through their hallowed halls will now see the All-American Girls Professional Baseball League. They will see action shots, individuals, lots of league memorabilia and above all they will see the names, hometowns, and years played by our players. For this we should all be very, very proud.”49

Cindric’s teammate on the 1950s Springfield Sallies, Shirley Burkovich, also noted the importance of the Hall of Fame recognition to the players. “We didn’t know we were pioneers. We were just doing something we loved, and that was playing baseball. We realize now that we were doing something special, and it’s very gratifying.”50

Ann Cindric was one of those pioneers. To live her dream she moved from her familiar Croatian community in Muse, first to play in Muskegon, Michigan and then to be on a traveling team based in Springfield, Illinois. Today Cindric is part of the permanent exhibit in the National Baseball Hall of Fame in Cooperstown, New York. Very few men and fewer women can say they’ve reached that achievement. As they would say back home, “Dobro napravljeno, Ann.”51

This biography was reviewed by Malcolm Allen and Rory Costello and fact-checked by Tim Herlich.

In addition to sources cited in the Notes, the author consulted http://www.ancestry.com.

28 Leslie A. Heaphy and Mel Anthony May, The Encyclopedia of Women and Baseball, (Jefferson, North Carolina: McFarland & Company, 2006): 70.

38 Heaphy and May, The Encyclopedia of Women and Baseball: 70.

42 Heaphy and May, The Encyclopedia of Women and Baseball: 70.

50 Rothenberg, “30 Years Ago, The AAGPBL Came to Cooperstown.”