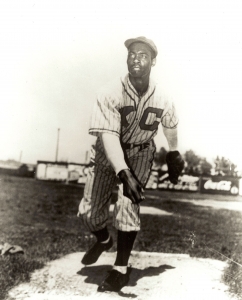 Over the course of seven seasons, from 1940 through 1946, Booker McDaniel both pitched and played in the outfield for the Kansas City Monarchs. During four of those seven seasons the Monarchs were Negro American League champions and twice competed in the Negro League World Series. McDaniel joined the club in 1940 as a 26-year-old, playing left field and hitting only .190 in 63 at-bats. The 1941 season saw McDaniel settle in as a mainstay on the pitching staff for the remainder of his career. He ended his career with a 24-11 record for the Monarchs in NAL play, with his best seasons coming in 1943 and 1945.1

Booker Taliaferro McDaniel was born on September 28, 1913, in Blackwell (Conway County), Arkansas, not far from the town of Atkins, where his family lived. He was the second of four sons born to Henry and Lottie (Lewis) McDaniel, all of whom worked as local farm laborers to help the family after their father died in 1919 while Booker was still a young boy. On November 29, 1931, 18-year-old Booker McDaniel married 17-year-old Lavada Myers, but little else is known about his early life. McDaniel first gained notice as a ballplayer around 1938 while playing for teams in his home state, and he joined the Monarchs in 1940.2

McDaniel was a local hero as he pitched for the Morrilton Sluggers in 1938 and the Fort Smith Grays in 1939. He earned his nickname, “Cannonball,” due to his blazing fastball. In one 1938 game local papers credited him with 17 strikeouts against the Dubisson Tigers.3 One thing that plagued McDaniel his whole career was the misspelling of his name from the start. Newspapers called him McDaniels, McDaniel, McDonald, and McDonel as just a few examples. As a result, finding his records and ascertaining that game reports and statistics truly are about McDaniel has always been a difficult endeavor.

With the Monarchs from 1940 to 1946, McDaniel soon was listed as one of the big four of the pitching staff with Satchel Paige, Hilton Smith, and Jack Matchett. He and Smith often came in to relieve Paige. A late-September contest in 1941 saw McDaniel on the winning end of a 7-2 score against the Chicago Spencer Coals as he pitched seven innings of shutout ball and struck out 10 en route to the win.  In 1942 one reporter stated that, while the focus on the Monarchs staff was on Paige and Smith, other pitchers — like McDaniel — should not be overlooked. After receiving such accolades, McDaniel pitched 14 straight scoreless innings in June against Cleveland and Dayton.4 In his first full season, 1942, McDaniel had a 5-1 record in 59 innings. By 1943 he had established himself as a pitcher to be reckoned with as he was 8-2 in 83 innings, placing him third on the Monarchs staff behind Paige and Smith.5

After the NAL season ended in 1943, McDaniel headed west to play alongside Satchel Paige for the Baltimore Colored Giants of the California Winter League.6 Paige, engaging in a bit of typical hyperbole, told a reporter, “He is a better pitcher than I ever was or ever will be.”7 In a game against San Diego, Paige and McDaniel combined for a 10-inning, 2-1 win. As if pitching to justify Paige’s compliment, McDaniel continued to build impressive strikeout numbers as his career progressed.

McDaniel was a key pitcher in 1945 for a Monarchs roster that included Jackie Robinson. In a 1945 exhibition game against the Chicago American Giants, McDaniel pitched five innings and struck out 10 as Kansas City won 3-1. Additional highlights that season included a 7-0 shutout over Birmingham in early April in which Robinson drove in the first two runs, and a 9-3 win over the Bushwicks in which he struck out eight while allowing only five hits.8

Like many strikeout artists, McDaniel struggled with his control, which was a problem that plagued him periodically throughout his career. In a 1944 game against Memphis, he pitched four brilliant innings and then gave up two hits, two walks, and a wild pitch in one inning that led to a 6-5 loss. In a June game against Cincinnati, Paige started and held his opponent scoreless, but McDaniel came on in relief and walked four, resulting in a 4-1 loss.9

Nonetheless, McDaniel had a good time and performed well far more often than not during his time with the Monarchs. He showed off his speed and decent control as he compiled a record of 24-11 with a 2.96 ERA. He has been credited with 236 strikeouts in 338 innings pitched. These numbers are as complete as the newspaper box scores allow but it must be remembered that strikeouts and walks were not always reported; thus, his numbers were likely higher on both counts.

McDaniel played in two All-Star games during his Negro League career — in 1943 for the South All-Stars and in 1945 for the West All-Stars. In 1943 he pitched three innings of shutout ball. The result was not so positive in 1945. Though the West held on to win, 9-6, all six runs were charged to McDaniel in 2⅔ innings pitched.10

At the conclusion of the 1945 NAL season, McDaniel journeyed to Cuba, where he played for Marianao during the 1945-46 winter season. Although Marianao finished in last place, McDaniel compiled a 9-7 record — with his nine victories accounting for 39 percent of his team’s 23 wins — and made the all-star squad.

In 1946 McDaniel joined a group of Negro Leaguers who jumped to the Mexican League for better pay and a less segregated life. McDaniel signed with the San Luis Potosi Tuneros for a supposed $9,000 for the season, according to fellow player Art Pennington.11 McDaniel pitched in 234⅓ innings, compiling a 14-18 record and a 3.26 ERA, which earned him a spot on the all-star team. Local Mexican papers also made note of his pitching speed, referring to him as “Balazo,” which translates to “gunshot.” In Mexico’s North-South All-Star game McDaniel got the start and gave up two hits and two runs in the first inning as his North teammates went on to lose 11-8.12

During the winter season, McDaniel rejoined the Marianao team in Cuba and went 0-2. Due to a dispute with US Organized Baseball, a new Cuban league known as the National Federation was founded, and McDaniel ended up pitching for Oriente, for whom he put up a 3-0 record before returning to Mexico for the 1947 season.

This time around McDaniel pitched for the Veracruz Azules, who fell to last place even though McDaniel was credited with a 14-14 record and pitched to a 3.41 ERA in 242⅔ innings. He again led the league in both strikeouts (127) and walks (161). Cuba beckoned again for the 1947-48 winter season and McDaniel participated in the Players Federation, pitching both for Santiago (3-2) and Alacranes (0-3). Afterward, he headed back to Mexico and rejoined San Luis Potosi, the club for which he had pitched in 1946. He finished the 1948 season with the Diablos Rojos in Mexico City and compiled a combined 12-12 record between the two teams.13 McDaniel stayed in Mexico for the winter season, pitching for Los Mochis Caneros. In the February 1949 all-star game between the National team and one composed of foreign players, McDaniel pitched two innings to help the foreign team win a shutout.14

After the 1948 season, the NAL owners voted to lift the five-year ban they had placed on players who had jumped to the Mexican Leagues. This allowed McDaniel to return to the Monarchs for the 1949 season. According to records published in the papers, he pitched in nine games and compiled a 4-4 record including one shutout. Commissioner Happy Chandler also had informally banned players who had jumped to the Mexican League and nothing was done to change that until the summer of 1949. A writer for the Indianapolis Recorder suggested that this circumstance accounted for McDaniel never having the opportunity to play in the White majors.15

After Chandler said that players who had jumped to Mexico could be re-signed, McDaniel was signed by the Chicago Cubs and assigned to the Los Angeles Angels of the Pacific Coast League. He integrated the Angels in June and was the first Black pitcher in the PCL.16 Before joining the Angels, McDaniel had pitched a couple of early games for the Monarchs. In an April game against the Clowns, he pitched three superb innings to help his team win, 5-1. His new team, the Angels, struggled, finishing far out of first place, but McDaniel managed to put up a respectable 8-9 record. His first start was a huge success as he pitched the Angels to an 8-3 win over Portland in spite of having to battle his nerves as the trailblazing pitcher integrated the PCL. McDaniel held the opposition to five hits while striking out six, but he also kept to his career pattern and walked eight. In his second straight victory after joining the Angels, McDaniel threw a six-hitter to beat the Seattle Rainiers, 17-0. 17 In early July McDaniel had won four straight games, with the fourth being a 5-3 complete-game victory over the San Francisco Seals. He gave up all three runs in the first two innings and then held the Seals scoreless, working out of a bases-loaded jam in the ninth inning to preserve the victory. Another win for McDaniel was a three-hit 6-1 victory over Oakland, where the reporter referred to him simply as “cannonball.” His winning streak eventually came to an end with an 8-6 loss to Portland in which he was knocked out in the first inning, giving up four runs.18

McDaniel came back for a second season in 1950, but now he was used primarily as a relief pitcher and put together a 3-4 record with an ERA over 6.00. He did show signs of his old speed in a relief appearance against Portland. McDaniel blanked the Beavers over the final three innings of a 4-1 loss, striking out three of the 10 batters he faced. As his age seemed to be catching up to him and slowing his speed, the Angels let him go before the 1951 season. Instead of taking another minor-league contract, McDaniel returned to the Monarchs for the 1951 and 1952 seasons. Proving he could still pitch, he put together an 8-9 season in 1951. In a complete game against the Indianapolis Clowns, McDaniel went the distance in a 5-4 loss to Willie Collins. One reporter compared McDaniel to Dazzy Vance and said he served up “aspirin tablets.”19

Over the winter, McDaniel pitched 45 innings for Mexico City Diablos Rojos. His final record was 1-2 with a 5.16 ERA.20 He pitched in 11 games for the Monarchs in 1952, completing six games with a 3-5 record. He struggled but still showed flashes of his old speed. In a 7-5 May loss to the Clowns, McDaniel gave up nine hits and seven runs but still struck out six. McDaniel continued to play locally through much of the 1950s while taking a job with the Wyandotte Grain Elevator Company. He retired in 1969 and died of throat cancer on December 12, 1974, in a Kansas City, Missouri, hospital.21

McDaniel pitched for several excellent Monarchs teams in the 1940s as part of the supporting cast for Hall of Famers Satchel Paige and Hilton Smith. One reporter called McDaniel Satchel’s policeman, coming in to hold the fort.22 Even so, he made a name for himself in the United States, Cuba, and Mexico. Although he had a short minor-league career, he played a key role in the integration of the PCL. Although a lack of control over his pitches troubled McDaniel throughout his career, he still compiled impressive strikeout statistics with his blazing fastball and deserves to be remembered for the fine player he was during his decade-plus career.

Ancestry.com was consulted for census, birth, death, marriage, and other public records.

Cuban League records and statistics were taken from the following (unless otherwise indicated):

Mexican League statistics were taken from the following (unless otherwise indicated):

Seamheads.com was consulted for Negro League records and statistics, except where otherwise indicated.