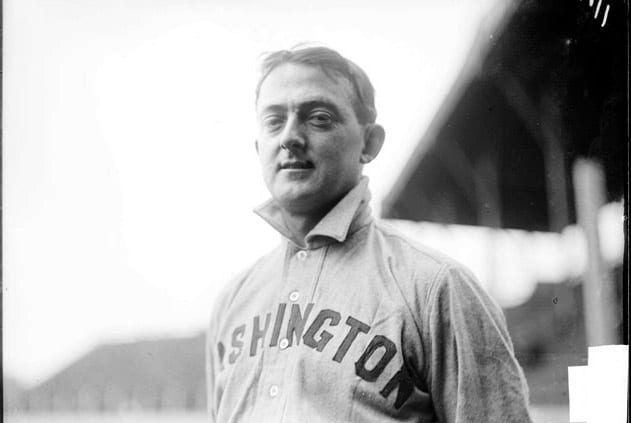 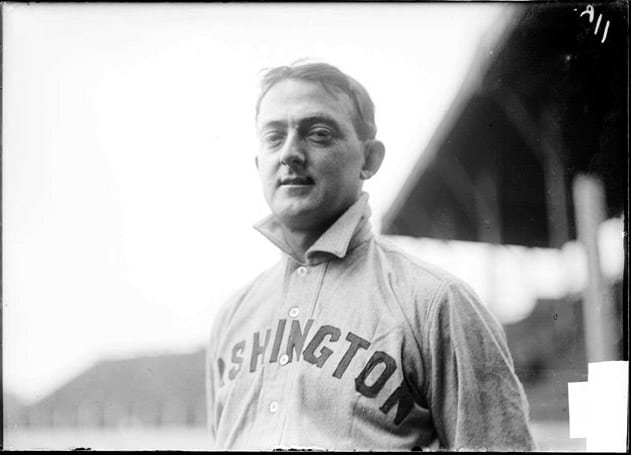 During a stellar career at Georgetown University in Washington, DC, Charlie Moran1 was “considered the crack college shortstop in the country”2 and had several major league clubs bidding for his services. Once he entered the professional ranks he soon developed a reputation as a trouble-maker and malingerer, wearing out his welcome with such celebrated managers as Jimmy McAleer and Ed Barrow. McAleer said, “He was late in reporting last spring, and from the day of his arrival in Dallas, tried to get off from practice and told hard-luck stories to his teammates.”3 Barrow added, “Why that fellow aggravated me to desperation during his short time he was with me. If he made a throw, he would grab his right shoulder with his left and prance around as if he were in torture. He imagined he had more ills and injuries than would put a team in the hospital, and if he had any ginger or spirit, he never exhibited it.”4

That reputation, injuries, and a batting average barely over .200 limited Moran to less than three seasons in the American League. However, later in his career, when he was being considered for coaching and minor league managing jobs, Moran was lauded for his “keen judgement of players, coolness, and character” and that he “knows how to handle himself and has proved on the field in the capacity of captain at various times in his career that he could get more work out of the players than the majority of managers.”5 The reason for the transformation in his temperament is not known, but after retiring from professional baseball, Moran went on to a long and successful career as the baseball coach at his alma mater.

Charles Vincent Moran was born March 26, 1879, in Washington, DC, to John and Catherine (Kate) Moran, both born in Ireland. His father, John, served in the 155th Infantry during the Civil War and worked as a government clerk, first with the Treasury Department according to the 1870 U. S. Census, and later in the War Department. Charles was the fifth youngest of eight children. He grew up with younger sisters Catherine (Kathryn) and Gertrude, an older sister Mary, and older brothers Joseph, John, Frank, and William.

Apparently Moran started out on local sandlot teams as when he enrolled in Georgetown University in 1898 he was referred to as “a local amateur of much repute.”6 Teammates at Georgetown included future major leaguers Art Devlin and Doc White. In addition to playing shortstop on the school’s baseball team Moran was elected secretary of the Georgetown Athletic Association, was involved in theatrical performances, and was “an elocutionist of some merit.”7 During his senior year (1902) Moran won the “Premium Banner” in the annual prize elocution contest of Georgetown students.8

He spent the summer of 1900 playing for an independent team in South Dakota but by this time was attracting the attention of professional scouts. The 5-foot-10-inch, 155-pound9 infielder began in Organized Baseball with Plattsburg of the Northern New York League in 1901, and apparently again in 1902, where despite his young age, he acted as captain and manager of the club.10

By his senior year several big league clubs were reportedly after his services including Barney Dreyfuss of Pittsburgh and Connie Mack of Philadelphia. In September it was reported that he had accepted contract terms offered by the Boston Nationals.11 However, he eventually signed with his hometown Washington Senators on December 4 for a $2,000 season salary “with a big advance.”12 Two factors swayed his decision to sign with the Senators. He had just enrolled in a post-graduate law course at Georgetown (he completed his undergraduate studies in spring 1902) and former Georgetown catcher Lew Drill, himself recently signed by Washington, recommended him to manager Tom Loftus.

Moran went to spring training with the Senators and was expected to compete with Rabbit Robinson, recently acquired from Kansas City of the Western League, for the starting shortstop job. Moran won the job, and he made his major league debut on April 29 against the Boston Americans at League Park in Washington. Facing Boston starter Norwood Gibson, Moran drew a walk, stole a base, and scored a run in a 9-5 Senator win. Shortly after his debut, Moran sustained a leg injury13, the first of many during his career, that kept him sidelined for a month. Once he returned to the lineup, he had problems at the plate. He secured his first hit on June 4 off Willie Sudhoff in a 9-1 loss to the St. Louis Browns, but he was only 1-for-18 in his first six major league games. However, he turned things around with a six-game hitting streak that brought his average to .310 and caused a reporter on June 10 to note that “Charlie has shaken off the stage fright with which he was afflicted at first and is now regarded as a fast, clean fielder and crackerjack batsman.”14 Despite batting just .225 in 98 games, Moran held on to the regular shortstop job all season with Robinson delegated to a utility role.

Moran’s status during the off-season was in limbo. There was one report that the Senators were dissatisfied with his performance and tried to arrange a trade with the Philadelphia Athletics. Unsigned for 1904 and threatened with a reduction in salary, Moran took over coaching the baseball team at his alma mater in January and was said to be “quite anxious to quit the professional ranks to practice law.”15 He finally signed his Washington contract but slowed by injuries and illness, be batted poorly (.222 average in 62 games) and by midseason was replaced at shortstop by Joe Cassidy.

In late June Moran sustained a leg injury and came down with a bout of malaria and went off to Atlantic City (without permission of the club) to recuperate. Apparently this didn’t sit well with some of his teammates as “Moran incurred the ill feeling of one or two of the local players and they ‘nagged’ him until he was forced to retire from the club.”16 He then asked for a trade and on July 14 the Senators dealt him to the St. Louis Browns for Hunter Hill and Frank Huelsman.

Despite his lack of success in Washington and the controversy surrounding his departure, his new manager with the Browns, McAleer, was glad to have him saying, “I always admired Moran’s playing and have often wished to have him play on my team. He is a splendid boy and will have two of the most skilled and most agreeable men to work with in the St. Louis infield. If he is ill at Atlantic City, I will let him remain there until fully recovered.”17

He eventually reported to St. Louis but Bobby Wallace was the Browns’ regular shortstop, so Moran was moved to third base and hit .173 in 82 games. He returned to the Browns in 1905. Harry Gleason became the team’s regular third baseman, and Moran made another position switch, this time to second base. Ike Rockenfield was the Browns regular second sacker so Moran found little playing time (27 games), and hit poorly when he did, his batting average standing at just .195 by late June.

Barrow, manager of the Indianapolis Indians of the American Association who later became owner of the New York Yankees, then engineered a trade that sent catcher Frank Roth to St. Louis for Moran. Charlie initially balked at the move, claiming that Fielder Jones of the Chicago White Sox had a prior claim on him.18 However, Barrow promised him the same salary he was making in St. Louis, along with a $100 signing bonus.19 Moran relented and joined his new team.

Just 26 years old, the trip to the minor leagues marked the end of Moran’s major league career. In 269 games split between the Senators and the Browns between 1903 and 1905 Moran complied a batting average of just .207. Whether it was injuries, weak batting, or more talented teammates, Moran was never able to hold down a regular infield job in the big leagues. In addition to two games in the outfield, he appeared in 157 games at shortstop, 87 more at third base, and 22 at second. In 1903 his .943 fielding percentage led all American League shortstops.

After one season in Indianapolis (1905) he was sold to Rochester of the Eastern League. Despite more anemic batting (.185 average in 125 games in 1906), Moran was invited back for another season. In the spring of 1908 Moran signed with the Washington entry in the new short-lived Union League.20 When that league folded soon after it began, Moran hooked on with the Scranton (Pennsylvania) Miners of the New York State League. He posted his best batting average of his professional career (.284) in helping the Miners to the 1908 league pennant.

He returned to Scranton in 1909 but broke a bone in his left ankle during a stolen base attempt in June. At first it was thought the injury would only sideline him for a couple of weeks, but when his recovery took longer than expected, the team owner paced him on the suspended list. He was never able to recover sufficiently to return to action and was eventually released by the club, batting just .161 in 56 games.

After the season Moran put together financing and made an offer to purchase the Scranton team from owner Eddie Coleman. If successful, Moran planned to install himself as player-manager. They could not agree on a purchase price, so the deal fell through. In February 1910 he signed to manage the Elmira club in the New York State League but abruptly resigned a few weeks later claiming he was not consulted on personnel moves and was merely a “figurehead.”21 At that point he retired from professional baseball and took a job with the Commerce and Labor Department in his hometown of Washington.2223 For several years he played, and later managed, in Washington’s Departmental League.

Also in 1912, Moran was hired as baseball coach at Catholic University of America in Washington. One of the players coached by Moran was an architecture student named Wally Pipp25 who also played first base. The following season Moran signed on as coach at Georgetown and he enlisted his old college teammate, Doc White, now pitching for the White Sox, to coach his pitchers before White had to report for spring training.26 While still continuing to coach at Georgetown, in 1916 Moran took on the role of athletic director at Catholic University. He was credited with building up not only the school’s baseball program but also track and field and football.27 He built very competitive squads during the late teens and early twenties but later in the decade, “the genial mentor has been handicapped considerably by lack of material.”28 Moran was inducted into the Catholic University Athletics Hall of Fame in 1992. During his tenure at Georgetown Moran also worked as a scout for the Detroit Tigers for several years.

In 1929, he stepped down as coach and athletic director and was replaced by John McAuliffe, a former football star at Dartmouth. Moran then took a job in the Permits Division of the Traffic Bureau29 and by the time of the 1930 U. S. Census he listed his occupation as that of a hotel clerk. Moran died April 11, 1934, in Washington, of a heart attack at the age of 55. After funeral services at St. Paul’s Catholic Church, he was buried Mount Olivet Cemetery. Moran was survived by his wife Marie, his three sons, and sisters Gertrude and Kathryn.30

This biography was reviewed by Bill Lamb and Keith Thursby and fact-checked by Kevin Larkin.

Unless otherwise noted, statistics from Moran’s playing career are taken from Baseball-Reference.com and genealogical and family history was obtained from Ancestry.com. The author also used information from clippings in Moran’s file at the National Baseball Hall of Fame.

1 He was often confused with another Charlie Moran (Charles B. Moran), a pitcher, catcher, and later umpire in the National League.

23 Although Moran had earned a law degree from Georgetown, it is not known if he ever worked as a practicing attorney.