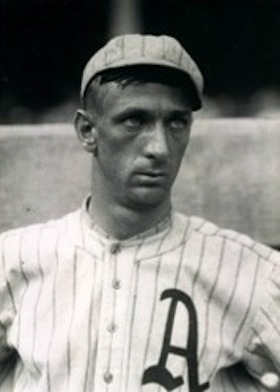 In 1916 Stan Coveleski of the Cleveland Indians and Jack Nabors of the Philadelphia Athletics played their first full season in the major leagues, and each pitched more than 200 innings. They had similar ERAs — 3.41 for Coveleski and 3.47 for Nabors — but while Coveleski’s won-lost record was 15-13, Nabors’s record was abysmal: 1-20. Cleveland won half its games that year, while Philadelphia compiled the worst record (36-117) in major league history from 1900 to 2014. Compared to the 1916 Indians, the 1916 Athletics scored 29% fewer runs and committed 35% more errors. Charlie Grimm, who roomed with Nabors during this inglorious season, said:

“Do you think that [Nabors’s losing] turned him to brooding, made him sour or a bad companion? Not at all. Nabors was the cheeriest individual you could ever find. He was happy because he was in the major leagues and going around the circuit in princely style. After losing game after game, many of which were lost by evil support, he never complained, but just took it as a matter of course.”1

Herman John “Jack” Nabors was born on November 19, 1887, in Montevallo, Alabama. He was the fourth of nine children born to farmer James Crow Nabors (1858-1933) and Sarah M. (Foster) Nabors (1860-1944).2 Jack pitched for amateur teams near Montevallo, and for industrial teams in Walker County, Alabama, that “would pay him if he pitched and won.”3 The lanky right-hander stood 6’3” and weighed 185 pounds.

In 1914 Nabors received a tryout with the Selma (Alabama) River Rats of the Class D Georgia-Alabama League.4 The next year he pitched for two other teams in the league. After a brief stint with the Talladega (Alabama) Tigers, he spent the remainder of the season with the Newnan (Georgia) Cowetas, named for the Coweta Indians. One of his Newnan teammates was a southpaw from Atlanta named Bill Terry; fifteen years later, Terry would hit .401 for the New York Giants. The 27-year-old Nabors, with a 12-1 record, and the 16-year-old Terry, with a 7-1 record, led Newnan to the 1915 pennant. During one stretch, Terry threw 46 consecutive scoreless innings, including a no-hitter on June 30,5 but it was overshadowed by Nabors’s achievement on June 15: a 13-inning no-hitter in a 1-0 victory over Talladega, with 11 strikeouts and no walks. Two men reached base on errors, but one was thrown out trying to steal second base, so Nabors faced only 40 batters in 13 innings.6 Sporting Life and the New York Times reported his gem.7

After the season ended on July 14, the Newnan team represented Gastonia in the Western North Carolina League, which began its season on July 26.8 Terry went with his teammates to Gastonia,9 while Nabors headed to Philadelphia. According to the Philadelphia Evening Ledger, Nabors was sought by every major league team, and “after a spirited bidding contest, the Athletics got him for what is said to be the highest price [$500] ever paid for a Class D minor league player.”10

Eddie Plank and Chief Bender had signed with the Federal League. Mack had sold Herb Pennock and Bob Shawkey. What remained of the pitching staff was a ragtag collection of youthful and erratic hurlers. Mack was desperate for help when he acquired Nabors from the deep bushes. Normally, a Class D star might advance to Class B, or maybe Class A, but Mack immediately pressed Nabors into service with the major league club. It was quite a leap. Mack said:

“I have never in my life seen a ballplayer as green as he was when he joined us. Ordinarily I would have passed him up at once, but he naturally interested me. I have had plenty of green ones, but he was the limit. I took a liking to the youngster because he realized that he knew absolutely nothing about the game. All he could do was throw the ball. He did not even know how to wind up, much less have a delivery which was permitting him to get the maximum amount of speed out of his pitches. The curve ball he used was of the back-lot variety and no one had shown him what to do with it or his fast ball. I was first attracted to the youngster because of his wonderful natural fast ball.”11

Nabors made his major league debut on August 9, 1915, in Philadelphia against the White Sox. He pitched a complete game and lost, 8 to 4. He was wild (seven walks and one hit batsman) and allowed 12 hits. The Athletics made six errors, including two by Nabors. The White Sox learned quickly that he did not know how to field his position, with “six of the first seven hits credited against him being safe bunts that were beaten out, while the other one was a hit that [first baseman Stuffy] McInnis fielded and Nabors forgot all about covering first.”12 Mack said, “I felt sorry for the lad when the opposing team started bunting on him. Nabors was tied into knots and if they had not taken pity on him they would have been beating out bunts yet.”13 Nabors pitched in 10 games for the Athletics in 1915 and posted a 0-5 record with a 5.50 ERA. The Athletics finished the season in last place with a 43-109 record; however, the nightmare had just begun.

Mack and the Philadelphia coaches had a chance to work with Nabors at spring training in 1916. Nabors showed “great improvement” and was “the talk of the Mack camp.”14 Sporting Life reported that he “probably has more natural ability than any man on the staff, but Nabors is so awfully green that he will not be of much use this year. At the present time Mack plans to send him to the mound regularly, believing that there is no better way to learn than by profiting by mistakes. He does not expect Nabors to show much until late in the season, but will not farm him out, as he wants to school this lad himself.”15 Mack admitted, “The season of 1916 is going to be an experimental one with the Athletics.”16

Mack rewarded Nabors’s progress by letting him start the season opener against the Boston Red Sox at Fenway Park on April 12, 1916. The Red Sox, with Babe Ruth on the mound, won the game, 2 to 1. Nabors impressed Mack by allowing no runs and two hits in his four innings of work against the defending world champions. Bullet Joe Bush took the loss for Philadelphia. The following is a chronology of the games in which Nabors received a decision:

Clearly, Nabors performed far better than his record indicates. He was handed several tough-luck losses. He had raw talent and was a work-in-progress as a pitcher and as a fielder. He led major league pitchers with 13 errors during the season.

Before spring training in 1917, Mack intended to keep Nabors in the starting rotation,31 but after spring training, Mack said, “Nabors has been a disappointment to me and I am not counting upon him.”32 Mack did not say why he was disappointed, but presumably, Nabors pitched poorly in the spring. The day before Mack expressed this, Hal Phytz of the Warren (Pennsylvania) Times Mirror wrote that Nabors “must show more to be numbered among the chosen.”33

Nabors’s major league career ended in late April when he was traded to the Indianapolis Indians of the American Association. Indianapolis sent him to the Denver Bears of the Western League. He pitched a three-hit shutout against Wichita (Kansas) on June 2; a no-hitter against Sioux City (Iowa) on July 22; and a two-hit shutout against Omaha on August 9.34 However, he lost his last seven decisions of the season and ended up with a 9-17 record for the Bears.35

In the spring of 1918, Nabors declared that he was ready to serve in the Army during World War I. He said, “Every man owes a duty to his country and should allow nothing to interfere between him and his performance of it. I am glad to have the chance to do my bit with the rest of the red-blooded Americans.”36 That summer the Army sent Nabors to Camp Dodge, Iowa, and he pitched for the camp baseball team.37 In the winter he came down with a severe case of the flu during the influenza pandemic of 1918-1919. He never pitched again and spent his remaining years “in and out of a sick bed.”38 He died of tuberculosis on October 29, 1923, in Wilton, Alabama, at the age of 35.

Nabors was a tragic figure in baseball history. Under different circumstances, he might have had a fine career. Instead he lives on in the record books with an ignominious career record of 1-25.

6 Atlanta Constitution, June 16 and August 2, 1915. Art Decatur was the opposing pitcher in Nabors’ 13-inning no-hitter and allowed only six hits in the game. Decatur pitched in the National League from 1922 to 1927.

10 Philadelphia Evening Ledger, July 13, 1915. The record amount paid by the Athletics to acquire Nabors was $500, according to the A’s ledgers at the DeGolyer Library, Southern Methodist University.