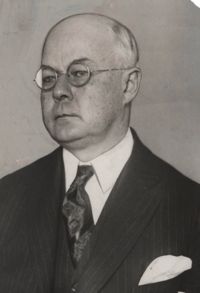 Known as “Old Stone Face” for his colorless, stoic demeanor, Frank Navin controlled the destiny of the Detroit Tigers for three decades, becoming one of the game’s most influential owners and important power brokers. During his lengthy tenure as Tigers president, Navin was, at various times, an implacable foe of the American League’s strong-willed president, Ban Johnson, and later an important ally and confidant for Commissioner Kenesaw Mountain Landis, who sometimes called Navin as much as 20 times in a single day. Like Charles Comiskey and Clark Griffith, Navin relied on his franchise as his sole source of income, and like those owners he developed a reputation for being tight-fisted and autocratic. “[Navin] kept an accounting of the day’s receipts in his vest pocket,” historian Joe Falls once wrote. “He was the owner, general manager, business manager, farm director, and publicity man, and, if things got busy, he’d be down in the booth selling tickets on the side.”1

Francis J. Navin was born on April 18, 1871, in Adrian, Michigan, the youngest child of Irish immigrants Thomas and Eliza (Crotty) Navin. Located 70 miles southwest of Detroit, Adrian served as a railroad hub, linking the Michigan Southern and Erie & Kalamazoo lines. To support his family, Thomas Navin worked on the railroad, though his children developed loftier ambitions.

Frank’s older brother, Thomas Jr., attended law school and became a successful Detroit attorney and prominent politician, before he was convicted of forgery as part of an embezzlement scheme while serving as mayor of Adrian, and sent to prison. Initially following in his brother’s footsteps, Frank earned a law degree at the Detroit College of Law (now Michigan State University Law School) and ran unsuccessfully for justice of the peace before abandoning the legal and political professions for more mundane work selling insurance and keeping the books for Detroit insurance agent Samuel Angus. Angus and Navin worked well together, and when Angus assumed control of the Detroit Tigers in 1902, he hired Frank to be his business manager. Navin had never played the game beyond the usual sandlot varieties, but with his business acumen, diligent work ethic, and masterly attention to detail, he quickly assumed complete control over the day-to-day affairs of the club.

After the 1903 season, Angus put the team up for sale and it was purchased by millionaire William C. Yawkey, who retained Navin to run the business end of the franchise. Yawkey died suddenly and the ownership fell to his son William H. Yawkey, who had little genuine interest in baseball and also leaned heavily on Navin. Yawkey bankrolled the enterprise but remained in the background as Navin became president by proxy until 1908, when Yawkey sold him almost half the club and Navin became team president. Upon Yawkey’s death in 1919, Navin finally became a half-owner of the Tigers, as the Yawkey estate sold him the 15 shares necessary to get up to 50 percent ownership. The remaining 50 percent was sold to automobile magnates Walter O. Briggs and John Kelsey, with Navin continuing in his role as team president.

While he immersed himself in the business of running a ballclub, Navin also acquired a thorough knowledge of the game itself, becoming a keen judge of baseball talent. In his own introverted and uncharismatic style, he quietly turned the mediocre Tigers into a pennant winner in a few short years.

From 1903 to 1905 Navin assembled the nucleus of the Tigers’ first pennant-winning clubs, luring outfielder Sam Crawford and pitcher Bill Donovan away from the National League, acquiring pitcher Ed Killian and third baseman Bill Coughlin, and purchasing 18-year-old outfielder Ty Cobb from Augusta of the South Atlantic League for $700. Another big coup for Navin was the signing of Hughie Jennings as manager prior to the 1907 season. After manager Bill Armour had seemingly lost control of the club in 1906, Navin happened to attend a minor-league game between Newark and Baltimore to scout some Newark prospects and was immediately attracted to the managing style of Baltimore pilot Jennings. Baltimore owner Ned Hanlon demanded $5,000 from the Tigers for Jennings, but because Baltimore had signed Jennings to a player contract before naming him manager, Navin shrewdly drafted him as a player, paid the standard $1,000 draft price, and then installed the fiery ex-shortstop as manager.

Under Jennings’ leadership, the Tigers won three consecutive pennants (1907-1909), while the penny-pinching Navin kept the team’s payroll among the lowest in the big leagues. After the 1907 season, for instance, Navin paid his two best players, Ty Cobb and Sam Crawford, a combined $8,000 in salary, considerably less than many players of comparable stature earned. “Paying a ball player his worth pained Old Stone Face deeply,” Ty Cobb later remembered.2 Cobb claimed that after his 1911 holdout, Navin attempted to rewrite his contract, which was supposed to be for $10,000, at a lower figure. When Cobb threatened to make Navin’s deceit public, the owner “fiddled with his pen and harrumphed a few times and finally restored the $10,000 sum.”3

Yet despite his penurious ways, Navin found other methods for earning the respect of his players. In May 1912, when Cobb was suspended indefinitely by American League President Ban Johnson for attacking a fan in the stands, Navin backed his players in their refusal to play until the ban was lifted, though he avoided paying the standard fine for failing to field a team by instructing Jennings to hire a group of collegiate and semipro players for $10 each. The resulting farce—the newly-minted Tigers lost their only game 24-2—infuriated Johnson, but may have helped persuade him to lighten Cobb’s suspension to 10 days. Throughout baseball, Navin was also known for looking after his players after they had passed their primes, by securing positions for them in the minor leagues. “[Navin] has never let a ball player leave his club without that man’s friendship,” Baseball Magazine commented in 1911. “Many a great star of today was secured because of the thoughtfulness of some ex-Tiger in tipping off his real merit to Navin.” For his part, Navin also publicly acknowledged the player’s perspective, though he continued to hold the line on salaries. “I do not think it is at all strange that the player fails to take into consideration the financial condition of the club,” he told Baseball Magazine in 1913. “It isn’t fair to cut a man’s salary simply because the club didn’t make money.”

By 1912, with Ty Cobb drawing fans both at home and on the road, Navin and Yawkey had raked in $365,000 in profits, and the franchise that Navin had once bought into for a few thousand dollars was now worth an estimated $650,000. The owners invested much of their earnings back into the franchise, building a new steel-and-concrete stadium on the site of old Bennett Park after the 1911 season. The new structure at Michigan and Trumbull avenues played host to the Tigers for the next 88 seasons, and was first known as Navin Field. In the early 1920s Navin improved the park by adding a second deck to the grandstand and installing a press box which provided sportswriters with the closest view of the action of any park in baseball.

But although Navin provided first-class amenities for the fans and reporters who came to watch the Tigers, he failed to bring another pennant winner to Detroit. After 14 years at the helm, Hugh Jennings resigned after a disastrous seventh-place finish in 1920, leading Navin to install Cobb as the club’s new manager. Despite having one of the best hitting clubs in baseball, the Cobb-led “Tygers” of 1921-26 made only one serious challenge, in 1924, finishing a close third behind Washington. Manager Cobb publicly blamed Navin for his reluctance to purchase needed pitching to fill out a championship roster, and by 1926 the Cobb-Navin honeymoon was over. In the wake of a budding game-throwing scandal involving Cobb and Tris Speaker, a disappointed Navin replaced the Georgia Peach with former Tiger George Moriarty.

Of all the major-league owners, Navin enjoyed perhaps the closest relationship with Commissioner Landis, who supplanted Navin’s old nemesis, Ban Johnson, as the game’s most powerful figure. The Navin-Landis friendship was not without its own inconsistencies, however. While Landis waged his crusade to rid the game of gamblers, Navin spent much of the money he earned from his franchise at the racetrack, gambling on horses. Umpire and scout Wish Egan recalled one afternoon at the track when Navin won close to $100,000. As the disgruntled bookie handed over the owner’s winnings, Navin whispered to Egan, “It’s music to my ears to hear those bookies squawk.”

But Navin didn’t always fare so well. By 1931 he had lost much of his personal fortune through the stock-market crash and accumulated gambling losses, and thereafter came to rely on his wealthiest partner, Briggs, to finance the club. It was Briggs’s cash that overcame sagging gate receipts to trade for high-salaried players like outfielder Goose Goslin and catcher/manager Mickey Cochrane. Under Cochrane’s leadership, the Tigers captured the American League pennant in 1934 and finally won their first world championship in 1935, in six games over the Chicago Cubs. The normally reserved Navin was beside himself with joy when Cochrane crossed the plate with the Series’ winning run and, uncharacteristically, he joined in the postgame locker room celebration. A little over a month later, on November 13, 1935, he collapsed from a heart attack while riding his favorite horse, Masquerader, at the Detroit Riding and Hunt Club. His body was later found by a search party. Dead at age 64, he left behind a wife, Grace Shaw Navin, but no children. After a funeral attended by dozens of baseball notables and hundreds of ordinary fans, Navin was buried at Mount Olivet Cemetery in Detroit.