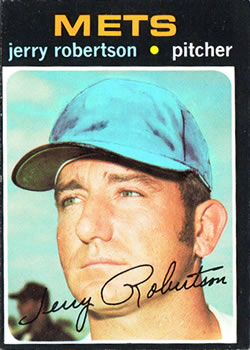 Career goals for a kid growing up in rural Kansas are pretty simple – either he works the family farm or comes up with a talent that allows him to see a world beyond a wheat field. The talent in Jerry Robertson’s right arm opened doors for him and allowed his childhood dream of being a big-league ballplayer to become – albeit briefly – a reality in 1969-70.

Gerald Lee Robertson,1 the only child of Mildred Hiebsch and Hullet Woodrow (Bus) Robertson, was born on October 13, 1943, on the family farm near Winchester, Kansas, a small town about 45 miles northwest of Kansas City.2

The youngster grew up playing all sports, particularly football, basketball, and baseball, excelling in all three. At Winchester High School, he was a three-year letterman in football, basketball, and track.3 Baseball wasn’t offered as a sport at that high school. Therefore, in the summer, he pitched for an American Legion team based in nearby Leavenworth, Kansas, and later for the Leavenworth team in the Kansas City area Ban Johnson League which is open to players up to their 23rd birthday. Robertson once struck out 19 batters in a seven inning Legion game and in 1963 he was selected to the Ban Johnson all-star team.4

Jerry was recruited to play baseball at Washburn University in Topeka, Kansas.5 Coach Marion McDonald didn’t have a scholarship to offer Robertson, but he did promise to get him a part-time job at the Topeka YMCA.6 At Washburn, Robertson starred for four years, earning Honorable Mention NAIA All-Star team honors.7 His 2.86 ERA is still ranked seventh all-time for Washburn pitchers and he stands fifth in career strikeouts.8 After graduating in 1965, that June, the 6-foot-2, 205-pound right-hander was selected by the St. Louis Cardinals in the 27th round of the amateur draft. Robertson received a $1,000 signing bonus. After a two-game stint with the Cardinals’ Rookie League team in Sarasota, Florida, he was assigned to Rock Hill (South Carolina) in the Class A Western Carolinas League, where he finished the year.9 His manager, George “Sparky” Anderson, used Robertson primarily in relief. In 48 innings, Robertson registered 51 strikeouts and a team-leading ERA of 1.88.

In 1966, Robertson and manager Sparky Anderson, moved to the St. Petersburg Cardinals of the Class A Florida League. He began the year as a starting pitcher, but Anderson moved him to the bullpen and Robertson accepted the relief role, believing it would be his quickest route to the major leagues.10

When the club reeled off an 18-game winning streak, Anderson, who earned the name Captain Hook as the manager of the Big Red Machine in the 1970s because he never hesitated to use his bullpen, pointed to Robertson, who had appeared in eight of the games, as the key. “Jerry is my hammerman. He’s my ox, my man who can throw every night,”11 said Anderson. At one point during the season, the skipper used Robertson in 14 straight games.12 Eventually, St. Petersburg’s streak reached 22, with Robertson securing many of the wins.13 On June 14, 1966, Robertson appeared in relief in the 10th inning of a game against the Miami Marlins. He pitched 1/3 of an inning and gave up one run. The game would extend for 29 innings and last nearly seven hours making it the longest professional baseball game played up to that time.14 St. Petersburg took the pennant and for the year, Robertson struck out 116 in 115 innings. He ended the year with a 13-6 record and a team-leading 1.49 ERA.

In 1967, Robertson was assigned to Little Rock (Arkansas) of the Class A Texas League. Again, he was used almost exclusively as a relief pitcher. He struck out 94 batters in 91 innings and, for the third year in a row, he led his team with a 1.98 ERA. He finished the year with a 10-5 record and was named to the Texas League All-Star team.15The fans in Little Rock further honored him by voting him the team’s most valuable player and awarding him a color television.16

St. Louis – the defending world champions – placed Robertson on their 40-man roster that fall and invited him to spring training in 1968. He nearly made the Opening Day roster but was one of the last cuts. The Cardinals assigned him to Tulsa (Oklahoma) in the AAA Pacific Coast League. Robertson was a rock out of the bullpen for manager Warren Spahn, leading the pitching staff by appearing in 53 games. His record was 4-2 and his 3.46 ERA was the highest of his minor league career.

The Cardinals chose to leave Robertson unprotected in the October 1968 expansion draft and the Montreal Expos took him with the 38th pick. Robertson, at first still a reliever, made the club. His major league debut came on Opening Day, April 8, 1969, pitching 1 1/3 scoreless innings in relief and getting no decision as the Expos beat the Mets, 11-10.17

In late-May, Robertson was moved to the starting rotation by Expos manager Gene Mauch, who was looking for help for his only two regular starters at that time, Bill Stoneman and Mudcat Grant. “I hope he can give me four or five shutout innings,” said Mauch before handing the ball to Robertson on May 23 in Cincinnati.18 Robertson allowed six hits and two runs while striking out nine. He was lifted in the seventh with a no-decision, but he earned a spot in the Expos rotation.

Robertson picked up his first win on June 8, 1969, as the Expos snapped a 20-game losing streak with a 4-3 victory over the Los Angeles Dodgers.19 He held the Dodgers to four hits over eight-plus innings and Elroy Face closed out the win. On July 4, 1969, the Expos snapped Philadelphia’s nine-game winning streak as Robertson pitched his first major-league complete game.20

For the year, Robertson pitched effectively with very little run support. He finished the year with a 5-16 record and his 3.96 ERA was the best of any pitcher on the staff with at least 15 starts. In his 16 losses, the offensively challenged Expos scored a total of just 20 runs and were shut out seven times. The highlight of Robertson’s year was a 3-2 victory over Bob Gibson and the Cardinals on September 6, 1969. It was Robertson’s fifth and last major-league win.

Over the winter, the Expos traded Robertson to the Detroit Tigers for pitcher Joe Sparma. Tigers manager Mayo Smith expected Robertson to compete for a role in the starting rotation. Instead, after a disappointing spring, Robertson was placed in the bullpen and then, on May 13 he was sent down to AAA Toledo. There he appeared in seven games with a 3-2 record and an ERA of 3.64. He was recalled by the Tigers on June 15, 1970, but again was ineffective pitching in relief. Robertson admitted as much, saying, “In Montreal, I was pitching regularly, and I was starting. But I just haven’t been able to get everything together here. I was just starting to come around when they sent me down, but I just haven’t been pitching good.”21 After being recalled Robertson only pitched twice, once allowing an inherited runner to score. His last appearance in the major leagues was on June 28, 1970. A few days later, on July 1, 1970, he was optioned to Toledo to make room for Denny McLain, who had been reinstated by Commissioner Bowie Kuhn after serving a three-month suspension for gambling.

In his years in the minor leagues, Robertson always threw hard and maintained a near one strikeout per inning record with a WHIP less than 1.00. But Robertson struggled to come up with an effective breaking ball and his minor league averages didn’t carry over to the major leagues. The Expos coaches observed that Robertson’s wrist was the sort that did not allow him to throw an effective curve or slider.22 The Tigers modified his windup with no meaningful difference. Also, while at Toledo, he broke a finger on his pitching hand on a line drive. Coming back from that injury, he injured his elbow.23

Robertson’s last year in professional baseball was 1971. During spring training, new Tigers Manager Billy Martin told Robertson that a couple of clubs had expressed an interest in him and that he might be traded. The New York Mets made a deal and assigned him to their AAA Tidewater club. He appeared in 37 games for the Tides, all in relief, but experienced continual pain while pitching and retired after the season was over.24

Robertson once confessed that he had no intention of doing anything after high school except working the family farm with his father.25 He put his baseball career in additional perspective, saying, “It’s a pretty tough struggle, especially when you are a mediocre ball player. But there is nothing I could ever do to have the experiences I did in baseball. There is just a small chance that you will get to play in the big leagues. There is something about achieving that – just knowing that you can compete with an Aaron or Mays and once in a while even get them out.”26

During his off seasons from baseball, Robertson worked at the Topeka YMCA. In 1972, after he hung up his cleats, he was named assistant executive director and later executive director of that organization, a position he held twice in his post-baseball career. From 1982 to 1989, Robertson served as the athletic director at his alma mater, Washburn University. In 1982, Jerry was inducted into the Washburn Athletic Hall of Fame. Robertson was credited with his seven-year professional baseball career and for being a four-year member of the Washburn baseball team that won the league championship in 1964 and ranked fifth in the nation. His 169 career strikeouts placed him first in school history at the time of his graduation. Robertson became a prominent civic leader who led the capital campaign to build the North Topeka YMCA facility, head up the transition of Washburn athletics from NAIA to NCAA Division II and spearhead the building at Washburn of Falley Field (baseball), Lee Arena (basketball, volleyball, swimming) and Petro Allied Health Center. He served as President of Downtown Topeka, Inc., was a member of the Rotary Club and a Board member of the Topeka Capitals, a collegiate summer-league team27.

Jerry Robertson and his wife Carol (née Cook) Robertson were married in 1965 and had two sons, Jeff and Jason Robertson. On March 24, 1996, Jerry and Carol were involved in an automobile accident about 10 miles north of Burlington in Coffey County, Kansas. Jerry was killed and Carol survived. She was transported to a Topeka hospital where she was admitted in serious condition and underwent surgery. She recovered from her injuries. A public memorial service for Jerry was scheduled after Carol’s recovery.28 He was cremated. The memorial service was held on May 25 at the First United Methodist Church in Topeka.29

In 2010, the main baseball stadium at the Lake Shawnee Sports Complex in Topeka, Kansas was named Jerry Robertson Field in his honor.30 In 2016, Robertson was inducted into the Shawnee County (Topeka) Baseball Hall of Fame.

Special thanks to Carol Robertson, who provided biographical notes in personal correspondence with the author on several occasions in 2021.

This biography was reviewed by Rory Costello and Evan Katz and checked for accuracy by SABR’s fact-checking team.

In additional to the sources shown in the Notes, the author used:

2 The only other baseball person of note to have lived in Winchester, Kansas is baseball historian Bill James.

5 Washburn’s baseball alumni include Davey Lopes who was taken in the 2nd round of the 1968 draft by the Dodgers.