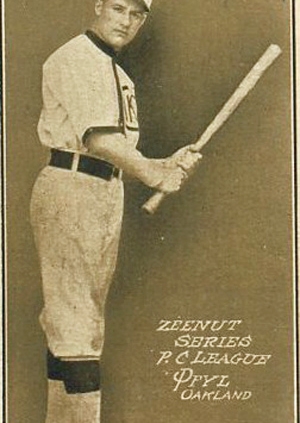 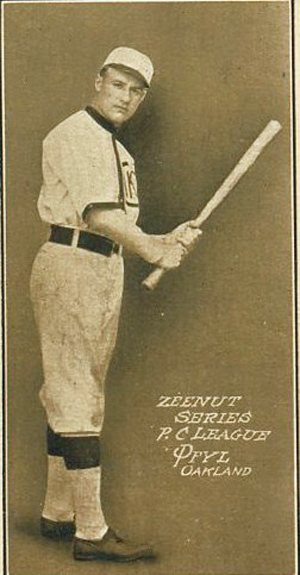 Monty Pfyl’s career began and ended with his “ultimate sacrifice.” In the left-handed first baseman’s only major league at bat, he followed instructions from John McGraw and laid down a sacrifice bunt. This event occurred before Pfyl had ever played an inning in the minor leagues. He later committed one of the Deadball Era’s ultimate sins: crossing McGraw and “jumping” the New York Giants organization. As a result, Pfyl served in baseball purgatory on the West Coast for five years, never returning to the majors.

Meinhard Charles Pfyl (pronounced “FEEL”) was born on May 11, 1886, in St. Louis to Charles Chad Pfyl, a cabinet maker, and Catherine Undericke Pfyl. The couple had married in Germany in 1885 and emigrated to the U S soon thereafter. Meinhard was the oldest of six children, but not much else is readily known about his early years. He played baseball in the St. Louis City Trolley League beginning in 1906 for the North Ends squad, while working as a clerk with the Insurance Agency Company.1 In July of the next year, while still in the City League, Pfyl’s proverbial ship quickly came in, albeit ever so briefly.

John McGraw, esteemed manager of the New York Giants, was disgruntled with the production of backup first baseman Jack Hannifin, so McGraw left him home as the squad headed west on a four-city, 19-game trip at the end of July 1907.2 As McGraw’s men rolled into their second stop, St. Louis, Giants scout Dan Brouthers, with a little birddogging help from a sportswriter for the St. Louis Globe-Democrat, recommended the city-leaguer Pfyl to McGraw to fill a temporary role for the upcoming series. McGraw agreed. Pfyl’s parents were initially reluctant to having Meinhard join the professional ranks, but the lad finally did sign.3

On July 30 at Robison Field, Pfyl had his one and only major league appearance. He batted for starting first baseman Frank Bowerman in the eighth inning, putting down a sacrifice bunt, then played two innings at first base. The New York Times spelled his name “Phyle” in the box score. The Globe Democrat spelled it Phyl, and wrote:

Phyl, a City League product, played first base during the last two innings for New York. He batted in the eighth inning for Bowerman, but had no chance to show what he could do beyond laying down a sacrifice. Furthermore, he had not a single chance at first in the two innings he played, and his first record in major league company is a bunch of zeros. Phyl does not look big and strong enough for major league company as yet. He was naturally very nervous yesterday, and did as well as could be expected under the circumstances.4

Monte Pfyl had played in the major leagues before ever playing a game in the minors. He stuck around on the bench for the doubleheader sweep by the Giants the next day, and the Cardinals win the day after, while his St, Louis friends presented him with a bouquet for ascending to the highest wrung of baseball’s ladder.5 However, Monte did not accompany the Giants to Chicago; he was sent to the Springfield (Illinois) Senators of the Class B Three-I League. Within two weeks, Springfield traded him within the league to the Cedar Rapids (Iowa) Rabbits.6

It was remarked that Pfyl, “the human beanpole … has a shape not altogether dissimilar to that of a bedslat,” with a similar build to major leaguers such as Addie Joss, [Cy] Falkenberg, Vic Willis, and Charlie Smith.”7 Nonetheless, Pfyl was placed on the Rabbits’ reserve list for 1908. However, in September, he and teammate Otis “Doc” Crandall were selected by the New York Giants in the Rule 5 draft for $750 each.8

Meinard Pfyl attended the Giants spring training the next spring, where it was commented that “his name is misspelled and mispronounced more than that of any player who has broken into print in a long while.”9 The youngster stated that his last name is pronounced “FEEL,” the moniker “Monte” was a “new one on him,” and he preferred to be called “Bill.”10 Whatever his name, the Giants sold him to the Baltimore Orioles of the Class A Eastern League. Pfyl’s had quite the debut in Baltimore, collecting three hits, which “augurs well for his good in the future.”11 He was injured after colliding with a Toronto spectator on Canada’s Victoria Day.12 Soon, the shine wore off with the Orioles, and Pfyl, a “New York National cast off,” was sold in June to the Altoona (Pennsylvania) Mountaineers of the Class B Tri-State League.13 By September, he was re-purchased by the Giants and recalled,14 but never saw game action.15 The Giants then optioned him back to Altoona for the 1909 season; “McGraw didn’t want to relinquish his claim on the youngster.”16 However, unbeknownst to Altoona or the Giants, Pfyl had “jumped” his contract and was heading to the West Coast.17

Pfyl signed a contract in March with manager Danny Shay and the Stockton Millers of the independent California State League. As the opening day first baseman on March 24, he collected three hits from the cleanup spot.18 By season’s end, he captured the league batting title at .358, collecting the most hits, 166, and tying for the league lead with nine home runs. Stockton won the league in a playoff over Oakland, and Pfyl was touted as “the greatest initial sacker developed in this state since Hal Chase graduated from the State league and blossomed out as the peerless first sacker of the country.”19

But who in organized baseball actually owned the rights to Monte Pfyl?

Portland Beavers manager Judge McCredie of the Pacific Coast League claimed Pfyl as his, citing a $500 purchase of Pfyl from the Giants in the fall of 1908, even after he had been farmed out to Altoona.20 To further convolute the saga, it was rumored in December that Pfyl and catcher Ed Burns had both signed with Connie Mack, who was on a West Coast recruiting junket for the Philadelphia Athletics for the 1910 season. However, National League President John Heydler quickly quashed these potentialities as it related to Pfyl:

Pfyl belongs to the New York Nationals, and the national commission will see that the Giants get him if they want him. The fact that Pfyl was in an outlaw organization last year doesn’t give Mack any right to the player’s services. The player belongs to New York and the Giants can do whatever they like with him.21

Pfyl returned to Stockton for 1910, but only because he was denied reinstatement to organized ball, even after pleading “extenuating circumstances.”22 In June, he underwent surgery to remove a painful large growth from the back of his right thigh.23 By month’s end, the Cal League disbanded, and Monte spent the summer moonlighting for Central California teams.24 In September, he joined the Oakland Oaks and manager Harry Wolverton, who were thick in a Pacific Coast League pennant chase with Portland.25 All PCL teams knew that the Giants still owned his rights, and that the National Commission allowance for Pfyl only extended for the late fall of the Coast season. Pfyl hit .249 in 53 late-season games.26 He also was a hero during the fall, saving the life of a woman on a San Francisco street from an oncoming streetcar.27

Pfyl was granted a concession by the National Commission to play only in the Pacific Coast League for 1911, and thus returned to Oakland. Despite hitting .296 over nearly 100 games, he was released by Oakland in late July in a surprise move by Wolverton. As the story went, Wolverton knew Pfyl would bolt to the East Coast once his ban was lifted, so the skipper wanted to develop more controllable talent.28 Monte finished the summer playing more outlaw ball for Stockton. In 1913 he was reinstated by the Giants, who immediately turned him over to the Providence (Rhode Island) Greys of the International League, Pfyl chose to retire instead, and worked for a San Francisco wholesale clothing house,29 while occasionally umpiring a city league matchup around Santa Cruz.30 The Giants put himon their ineligible list. In January 1913, Pfyl had another surgical operation performed in Stockton, before heading back out on the road as a traveling salesman for a San Jose-based mercantile outfit.31

There was a Pfyl playing organized ball in 1913: Monte’s brother, Arthur, who pitched for the St. Louis Terriers in the independent Federal League32 after having previously pitched for Keokuk (Iowa) of the Central Association in 1911. In October 1913, Monte was officially reinstated, and thus returned to the Giants’ possession, although it was a longshot that he would ever again “answer the crack of McGraw’s whip.”33

Pfyl was quickly sold to the Chattanooga Lookouts of the Southern League. However, he rebuffed multiple efforts by the Lookouts to sign a contract, instead contending he was a free agent, so Chattanooga returned him to New York.34 He lobbied president Henry Berry of the Los Angeles Angels to “make a deal that will put him back on the [West] Coast,” but nothing transpired.35 The National Commission saw it differently, asserting once again that Pfyl was still under ownership of the Giants, so the Giants cast him out instead to the Jersey City Skeeters of the International League.

On April 13, 1914, Pfyl married Effie McNamara, a daughter of a former Stockton city councilman, in Oakland. The next day, the couple departed for Jersey City, “combining business with their wedding trip.”36 The Oakland Tribune did acknowledge, however, that Pfyl was attempting a “come back.”37 Back on the East Coast, he played first base and outfield for the Skeeters. The New York Yankees nearly consummated a deal with Jersey City in June to land him, but it collapsed.38 He was unconditionally released by Jersey City in August, ending his last professional season.

By 1918, Monte and Effie moved back to Northern California, with Monte’s September war registration listing him as an industrial engineer at Great Western Power in Oakland. The next year, the couple welcomed twin boys, Frank and Monte Jr. At the time of the 1930 census, the family lived in Sacramento, where Monte was a salesman for the Powell Company. In 1938, the local phone directory listed Monte as working as an engineer for San Joaquin Light and Power, with Effie as a seamstress.

By the fall of 1938, son Monty Jr. was attending Stanford University, playing football and baseball. On April 27, 1939, Junior had five hits as Stanford beat USC, 8-6. A year later, Pfyl Jr. started at shortstop against fellow shortstop Jackie Robinson and UCLA, as Stanford defeated the Bruins, 3-2.39 Monty Pfyl Jr. later played for the Alabama Army Air Forces Eastern Flying Training Command football team, then, in 1948, for the Yakima (Washington) Packers of the Class B Western International League.

Monty the elder later worked as an electrician at Bethlehem Steel, and he and Effie would divorce in the early 1940s. Monty Pfyl Sr. died on October 18, 1945, in San Francisco of throat cancer, after being hospitalized for over three months. He is buried at the Park View Cemetery in Manteca, California.

This bio was reviewed by Bill Lamb and Norman Macht and checked for accuracy by SABR’s fact-checking team.

32 Referenced as Pfyle in Baseball-Reference.com.