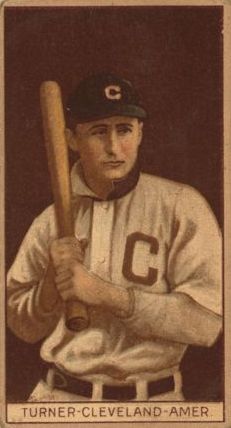 Known for his fielding prowess and head-first slides, Terry “Cotton Top” Turner is Cleveland’s all-time leader in games played with 1,619. The quintessential utility player, the 5’8″, 149-pound Turner was, in the words of sportswriter Gordon Cobbledick, “a little rabbit of a man with the guts of a commando.” He was also one of the era’s finest practitioners of the inside game; his 264 sacrifices are tied for the second most in franchise history, and his career total of 268 ranks 26th on the all-time list. “Inside work is a big factor in modern baseball,” Turner declared in 1906. “You will observe, if you look closely, that winning teams are the ones that have developed this feature of the game. Inside work does not permit individual playing as much as where every man is a unit, but it brings results, and, after all, that is what counts.”

Terrence Lamont Turner was born on February 28, 1881 in Sandy Lake, Pennsylvania, the oldest of two children of a blacksmith, Clarence Turner, and his wife Alta. After completing his schooling, Terry began his professional baseball career at the age of 19 with the Wheeling Stogies of the Inter-State League, where he batted .307 with 21 steals while manning first base. In 1901 Turner joined Ashtabula (Ohio) of the outlaw Oil and Iron League and moved with the rest of the team to Dubois, Pennsylvania, for most of the 1901 season. Terry reportedly drew interest from both the Athletics and the Reds that season, but the Pittsburgh Pirates got there first, purchasing his contract near the end of the 1901 campaign. Appearing in two games for the Pirates, Turner gathered three hits in seven at-bats. His debut performance caught the eye of the press, which remarked that he was “the greatest factor both inside and out in downing the [Cincinnati] Reds” on his first day in the majors.

Nonetheless, at season’s end the Pirates released him to Columbus of the American Association. Playing third base for Columbus in 1902 and 1903, Turner batted .295 and .310, respectively, and led the team with 41 stolen bases in 1902. It was also in Columbus that Turner began to use his patented head-first slide. In a 1955 Cleveland Press article, Cotton noted, “I discovered at Columbus that sliding feet-first wasn’t for me. I caught my spikes too often and hurt my ankles. Yes, I suppose head-first was dangerous, too, and I still have scars on my hands where I got stepped on. But for me, it was better.”

Late in the 1903 season, Terry was traded to Cleveland for infielder Billy Clingman and pitcher Gus Dorner, but remained with Columbus for the duration of that season. He opened the 1904 season at shortstop for Cleveland, a position that had been a major weakness for the club during its first three seasons in the American League. Over the next four seasons, Turner developed into a respectable hitter by Deadball Era standards, batting .291 with 27 doubles and 85 runs scored in 1906. A .253 lifetime hitter, Turner nonetheless had a knack for breaking up no-hitters, something he did three times in his career. In a May 12, 1910, game against Chief Bender and the Philadelphia Athletics, Turner was the only Cleveland batter to reach base, gathering a walk in the fourth inning to deprive Bender of a perfect game.

Fielding was his specialty, though. At shortstop, the position he played more than any other during his career, he led the league in assists, double plays, and fielding percentage in 1906. Turner’s defensive ability and versatility elicited comparisons with the greatest player at the position in baseball history, Honus Wagner. Just as Tommy Leach called Wagner the best first baseman, second baseman, third baseman, shortstop and outfielder in The Glory of their Times, in 1913 Cleveland manager Joe Birmingham called Turner “the most valuable infielder in the American League…as he can play third base, second base, and shortstop equally well.” Birmingham continued, “It is only once in a lifetime that you find one of these players who is brilliant wherever you play him… He is too valuable a man to tie at one position when he is so good at several.”

F.C. Lane of Baseball Magazine also acknowledged Turner’s outstanding ability at the three infield positions in a 1913 article about third basemen. Dubbing him “a performer who is superior to the regular incumbent at third and short,” Lane added that “Turner, in his prime, was a shortstop who for brilliancy of fielding has never been surpassed.” Terry did some filling in for Cleveland’s star second baseman Nap Lajoie in 1913, and Lane judged that he “covered second as ably as Lajoie.” For his part, Turner thought shortstop was the most difficult position to field, noting, “Third basemen are sometimes applauded for catching line drives hit right at them. The fans seem to think the play good because the ball is hit hard. Liners are the easiest to catch of all batted balls. The meanest kind are pop flies. They twist and are liable to twist out of a fielder’s glove. A fielder is generally hooted for muffing a pop fly, when he should be given credit for getting his hands on the ball.”

Of course, Turner’s arsenal also included speed. His 256 career steals rank him third in Indians history. His aggressive style on the base paths contributed to his propensity for injury, however. Various injuries and illnesses often kept him out of the lineup, including a bout with typhoid fever in 1904 and a serious beaning in 1908. When Ray Chapman was killed by a pitched ball in 1920, several observers compared the incident to Turner’s frightening experience 12 years earlier. “I can still remember vividly how I was fascinated by seeing that ball coming towards my head,” Turner later told the Cleveland Press. “I was paralyzed. I couldn’t make a move to get out of the way, though the ball looked as big as a house… The ball crashed into me. It sounded like a hammer striking a bell. Then all went dark.” Turner recovered from that injury, although because of his various ailments he managed to play in 140 or more games only four times in his 17-year career.

What Turner lacked in durability within a season, he made up for with longevity over the years. Besides being Cleveland’s career leader in games played and ranking third in steals, Turner tied for second in sacrifices (264), third in at-bats (5,787), ninth in hits (1,472) and ninth in triples (77). His 38 sacrifices topped the league in 1914.

Terry’s long run in Cleveland officially came to an end when he was given his unconditional release on August 25, 1918. He signed with Cleveland again in 1919, but never got into a game and was released on July 3, 1919. Some two weeks later Connie Mack signed him, but he appeared in only 38 games for the miserable last place A’s. Turner’s subpar performance (.189 batting average with only two steals and seven runs scored) marked the end of his major league career. Sadly, the Tribe’s all-time games played leader was not around just one season later to taste the World Series triumph in 1920.

After baseball Turner returned to Cleveland, where he lived with his wife Jo and worked as a chief superintendent in the Cleveland Street Department until 1952. He died in Cleveland on July 18, 1960, at the age of 79, after suffering a stroke.

F.C. Lane, “Who is the Greatest Third Baseman and Why?” Baseball Magazine, 1913

Laurence Ritter, The Glory of Their Times, Macmillan, 1966.

The author would also like to thank American Association expert Rex Hamman.