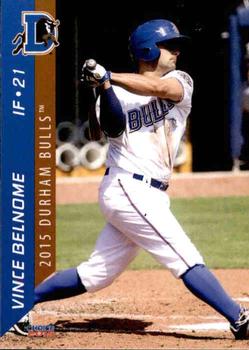 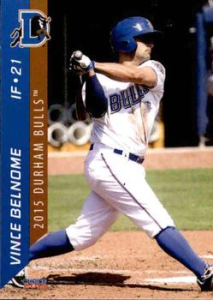 Possibly the only “one-hit wonder” to belt a ground-rule double for his knock, one of the few to play only designated hitter, and one of the rare ones who (but only temporarily) had a second base hit, Vince Belnome is a unique twenty-first-century addition to the list of one-hit wonders.

Vince’s father, also named Vince, “bought his son a batting cage and pitching machine when the younger Belnome was in ninth grade.”1 The younger Vince was a three-time team MVP for Coatesville High School, hitting .557 in his senior season, and setting a school career batting average record. He belted two home runs against Bishop Shanahan on March 30. His team won the Pennsylvania Interscholastic Athletic Association District 1 AAAA championship in 2006 with a perfect 23-0 record, but fell in its first state tournament game.

Belnome earned a half-scholarship to West Virginia University. In his freshman year he suffered a torn ACL in a game against St. John’s. In 2009, Belnome’s junior year, he slashed .418/.517/.648 with 84 RBIs, 9 home runs, 20 doubles, and 66 runs scored for the Mountaineers, one of three starters who hit above .400.2 In the Mountaineers lineup, he regularly hit behind Jedd Gyorko, later also a minor-league teammate. Belnome hit a grand slam on March 21 against the University of Connecticut.3 He went 6-for-6 with two home runs, four runs scored, and nine RBIs in an 18-3 blowout of the University of Cincinnati on May 10.4 Belnome finished in the top 20 of NCAA regular-season batters for 2009.5 He majored in sports management while in Morgantown.

After his junior season, Belnome was drafted by the San Diego Padres in the 28th round of the June 2009 amateur draft, one of two Mountaineers drafted, along with catcher Tobias Streich.6 Belnome signed, and was assigned to Eugene (Oregon) of the low Class-A Northwest League, slugging .500 with 10 home runs and 16 doubles for the Emeralds. Later in the summer of 2009, he was promoted to Fort Wayne of the Midwest League and batted .500 in 10 games in helping the TinCaps win in the first round of the league playoffs. Belnome was selected to both the Northwest and Midwest League all-star teams. He worked extensively with Padres minor-league hitting coach Bob Skube.7

In 2010 Belnome moved up to Lake Elsinore of the high Class-A California League. He earned Organization All-Star status. His Bowman Padres prospect card listed these attributes of Belnome: a “selective hitter who rarely strikes out. … Plays with great intensity. … Can staff three positions. … Keeps weight back and uses whole field. … Shows burgeoning power.” Belnome hit .273 (Brandon Belt led the California League with a .383 average) with an on-base percentage of .397, thanks to 102 walks, although he did also strike out 136 times.

Belnome enjoyed a breakout 2011 campaign for San Antonio of the Double-A Texas League and manager Doug Descenzo. He slashed .333/.432/.603. He earned Texas League Player of the Week for the week ending on June 13 by going 11-for-23 with 5 home runs and 16 RBIs. However, he played in only 75 games due to a pulled groin and lower abdominal strain.

Belnome kept climbing the Padres organizational ladder, playing for the Padres’ Triple-A affiliate in Tucson in 2012. He began the year as the starting second baseman in an infield that included catcher Yasmani Grandal,8 but spent over six weeks on the disabled list in May and June with a separated shoulder. Belnome returned and became the starting third baseman. In 80 games with Tucson for manager Terry Kennedy, Belnome hit .275 with five home runs. Kennedy commented that Belnome was “a good teammate. You can’t ask anything else of a player.”9 However, in December 2012, Belnome was traded by San Diego to Tampa Bay for Chris Rearick.

To begin 2013, Belnome was assigned by Tampa Bay to Durham of the International League. He batted cleanup, in a lineup including future major leaguers Brandon Guyer, Shelby Duncan, Tim Beckham, Mike Fontenot, and Chris Gimenez.10 He was selected the Bulls’ MVP by hitting.300 with an on-base percentage of .408, second in the league, and 77 runs (also second) in 127 games, including double-digit starts at third base, first base, and second base. Belnome earned IL Player of the Week honors in late April, and started in the IL all-star game.11 He was batting .345 as of early July for the Bulls.12 Even more than the production, however, was Belnome’s influence in the clubhouse. “He’s always upbeat,” teammate Duncan commented, adding that to “have a positive, uplifting, encouraging personality like Vince makes everyone around him better.”13 The Bulls swept the Indianapolis Indians in the semifinals, then topped the Pawtucket Red Sox in four games to win the International League pennant. Belnome was also named a Tampa Bay organizational all-star.14 In the winter, he played six games for Estrellas of the Dominican League.

Belnome began 2014 back in Durham for manager Charlie Montoyo as the primary first baseman, while also earning starts at third base and new professional positions of left field and right field. Baseball America pegged Belnome as having the best strike-zone discipline in the Rays system. However, Belnome actually began his year with the Rays, as he was recalled on April 4 while Sean Rodriguez was on paternity leave, arriving from Durham after the first pitch on Opening Night. Belnome did not see action in the game, and was returned to Durham the next day. For the Bulls in 2014, Belnome hit only .245 while striking out 128 times. Still, he was third on the team in doubles with 25 and tied for fourth in home runs with 10. It was certainly that potential power from the left side of the plate that intrigued the Rays.

Belnome was again recalled by Tampa in early July, earning his first start for manager Joe Maddon as the designated hitter in a game at Detroit on July 3. His parents made the seven-hour drive from Pennsylvania, and his fiancée drove up from Durham.15 For his debut he drew Max Scherzer, the reigning American League Cy Young Award winner. Belnome struck out twice and flied out. Nonetheless, Belnome had a fond memory of the evening: “One of the greatest feelings in the world, playing in ‘The Show’ with 50,000 people there16 including my family. The moment was incredible. I was facing a former Cy Young Award winner so I knew it wasn’t going to be easy but I was up for the challenge.”17

Belnome was returned to Durham two days later, but made it back with the Rays in August, earning starts at DH in home games on August 16 and 17 against the New York Yankees. He went 0-for-2 with a walk in each game, making his record 0-for-7 up to this point in his big-league career.

For his fourth career major-league starting assignment, on August 19 at Tropicana Field, Belnome drew, as luck would have it, Scherzer again. This time, though, the Rays jumped on Mad Max early, plating three runs in the first thanks to James Loney’s home run. Belnome led off the bottom of the second, and hit a ground-rule double to right-center field,18 after center fielder Rajai Davis  lost the ball in the Tropicana Field ceiling. Belnome later scored on Ben Zobrist’s single. Leading off the fourth inning, Belnome was momentarily banished from the list of “one-hit wonders,” when he belted an opposite-field home run … or so everyone thought. As Belnome trotted around the bases and was about to accept his congratulations from third-base coach Tom Foley, Scherzer began arguing with home-plate umpire Greg Gibson. After Gibson convened the four umpires, crew chief Gerry Davis ruled the hit a foul ball instead of a home run. Belnome then struck out looking to complete the at-bat.

After a fly out in the sixth inning, Belnome later hit a crucial sacrifice fly in the eighth, which tied the game and ultimately sent it into extra innings. He was walked intentionally by the Tigers’ Jim Johnson in the 10th inning, with the winning run in scoring position, but Detroit escaped the jam, and end up beating the Rays 8-6 in 11 innings.

Belnome soon was returned to Durham for its playoff push. The Bulls defeated the Columbus Clippers in the International League semifinals, earning a return trip to the finals, once again against the PawSox. This time, Pawtucket prevailed, in five games. Belnome was recalled a fourth time in the season by Tampa Bay, in late September, but did not play. In the offseason he was dropped off the Rays’ 40-man roster, outrighted back to Durham.19

In 2015 Belnome began in Durham as the longest-tenured Bull on the roster, playing in 291 games over three years. He even saw spot pitching duty in a 17-6 blowout loss to Charlotte in early July.20 His offensive production fell way off; he batted .16921 before being released on July 22 to make roster space for outfielder Grady Sizemore.22 Vince signed as a free agent on July 28 with New York Mets organization, and was assigned to Binghamton, which lost in the first round of the Eastern League playoffs.23 After the 2015 season, he elected free agency, was not signed, and had not played professional baseball since 2015.

Belnome summed up his major-league experience:

I love baseball, always have and always will. I had a dream when I was a young scrap and I told everyone that I would be a MLB PLAYER. Sure, it wasn’t for 10+ years but I made it to the big leagues and ended up getting a hit off of a former Cy Young winner (and future Hall of Famer). No one can ever take that away. I will have plenty of stories to tell my children when they want to listen!24

Vince Belnome and his wife, Abby, have a son Bowen (b. 1997) and another son who was due in November 2020. Belnome is a carpenter and co-owner/operator of Balance Hitting Academy in Parkesburg, Pennsylvania.

In addition to the sources cited in the Notes, the author relied on Baseball-Reference.com and MyHeritage.com Birth, Marriage, Death Records.