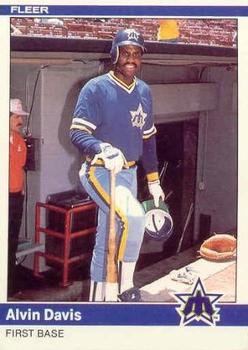 Alvin Davis expected to spend 1984 in Triple A with the Salt Lake City Gulls. But a pitch from Milwaukee’s Jerry Augustine fractured Ken Phelps’s finger in the first week of the season, creating an opening at first base for the Seattle Mariners. After playing just one game in Salt Lake City, Davis, the former Arizona State University star and a 1982 sixth-round draft pick, got the call to join the Mariners.

Davis made his major-league debut on April 11 when the Boston Red Sox visited Seattle’s Kingdome. A crowd of 9,120 gathered for the Wednesday night affair. The Red Sox’ starting lineup featured three future Hall of Fame inductees: Wade Boggs, Jim Rice, and starting pitcher Dennis Eckersley. The Mariners, off to a franchise-best 5-1 start, sent Matt Young to the mound. Davis hit sixth in the batting order.

Eckersley retired the first five Mariners in order before Davis stepped to the plate for his first big-league at-bat. Thirty-six years later, in 2020, Davis recalled the moment: “I remember that first at-bat like it was yesterday. The veterans on the team had given a scouting report on Mr. Eckersley, and they were spot-on my first at-bat.”1 Davis got the fastball he was expecting but was a bit late and flied out to Rice in left field.

The first scoring threat of the game came with the Mariners batting in the bottom of the third. Bob Kearney led off with a double and moved to third on Phil Bradley’s bunt single. After Spike Owen popped out to Boggs, Jack Perconte sent a fly ball to left field. Rice made the catch and threw out Kearney at the plate for an inning-ending double play.

The game remained scoreless when Davis batted again in the bottom of the fourth inning. After Barry Bonnell and Pat Putnam singled, Al Cowens grounded into a force out, setting up runners on the corners for Davis.

The left-handed-hitting rookie again got the fastball from Eckersley that he was looking for. This time, he got the barrel of the bat around and sent a deep drive over the right-center-field wall for a three-run home run. The Seattle Daily Times asserted that ball could have traveled 450 feet had it not hit the Kingdome’s second deck.2 “I tried to get inside on him with a fastball,” said Eckersley. “I don’t give up cheapies, and he got all of it.”3

Cowens added a solo home run in the sixth inning to give the Mariners a 4-0 lead. Matt Young, meanwhile, was mowing down the Red Sox lineup. Through seven innings, he scattered three singles while striking out eight.

Boston finally broke through in the eighth when Dave Stapleton led off with a double and scored on Gary Allenson’s single. After Dwight Evans singled and Boggs walked to load the bases, Dave Beard relieved Young. Beard struck out Rice on a curveball to end the Red Sox threat.

After back-to-back doubles by Putnam and Cowens gave the Mariners a 5-1 lead in the eighth inning, Davis faced Eckersley for the fourth time. In a display of respect for the rookie, Eckersley intentionally walked Davis to get to Kearney, who grounded out to end the inning.

Seattle carried its seemingly secure 5-1 lead to the ninth — where a series of fielding mishaps nearly cost the Mariners the game. With Beard still on the mound for the Mariners, Mike Easler led off the inning with a short popup to left field. Shortstop Owen and third baseman Domingo Ramos collided, allowing the ball to drop and Easler to reach with a double. After Tony Armas walked, Beard retired Stapleton on an infield pop fly and induced a groundball off the bat of pinch-hitter Rick Miller, who reached on a fielder’s choice. The Red Sox had runners at the corners, but with two outs.

The third out proved difficult to obtain for the Mariners. Miller’s run was meaningless, but Beard attempted to pick him off first base. He made a wild throw for an error; Easler scored and Miller went to third base. “I haven’t picked off a runner in six years. I just went into my stretch — and blacked out,” Beard said after the game.4

Rich Gedman walked, bringing the tying run to the plate. Seattle manager Del Crandall called on Mike Stanton from the bullpen to replace Beard. What should have been a game-ending groundball off the bat of Jerry Remy resulted in an error when Owen threw low to second base, allowing another run to score. Evans followed with an RBI single, which cut the Mariners’ lead to 5-4.

Wade Boggs came to the plate. In 1983 the 25-year-old Boggs had recorded a .361 batting average and a .444 on-base percentage, leading the American League in both categories. Crandall brought in southpaw Ed Vande Berg to face the left-handed-hitting Boggs. Boggs, who in 1983 hit .398 off right-hand pitching versus .281 against lefties, drew a walk.

Crandall then called on Roy Thomas, the Mariners’ fourth pitcher of the inning. Rice, who led the AL in home runs and RBIs in 1983, came to the plate with the bases loaded again. Following Beard’s lead from Rice’s strikeout in the eighth, Thomas threw Rice several slow curveballs and induced a fly out to left field, securing the nailbiting win for Young and the Mariners.

Davis figured he would be heading back to the minor leagues when Phelps returned a few weeks later. As it turned out, Davis played so well that he took over as the starting first baseman, and Phelps was used as a DH when he returned from his injury. Davis homered again in his second game and started his career with a nine-game hitting streak. For the season, he led the Mariners in WAR (6.0), posted a slash line of .284/.391/.497, hit 27 home runs, and drove in 116 runs. He became the first Mariner to win the Rookie of the Year Award.

“It really was a dream come true, like the best-case scenario, with my first exposure to the major-league level. At the time, I was very confident that I could and would compete at that level. It was a confidence found on hard work and success,” said Davis in 2020.5

For the rookie who later became known as “Mr. Mariner,” this was just the beginning.

1 “Checking In with ‘Mr. Mariner’ Alvin Davis,” From the Corner of Edgar & Dave, Official blog of the Seattle Mariners, April 17, 2020. https://marinersblog.mlblogs.com/checking-in-with-mr-mariner-alvin-davis-3a3fd074cb41, Accessed November 14, 2020.