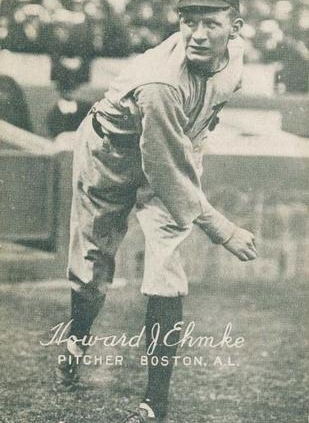 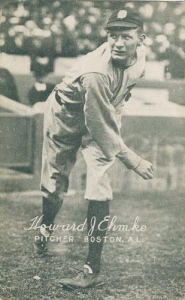 Few baseball writers predicted big things for the 1926 Boston Red Sox. The consensus was that the Red Sox were still in dire need of improvement after three eighth-place finishes in four seasons.1 But manager Lee Fohl ignored the naysayers and remained optimistic about his team’s prospects. Fohl insisted the Red Sox would do better than their 47-105 record in 1925. The writers were not convinced, however; when surveyed, they picked the Red Sox to finish last again.2

Whether the team won or lost, many loyal fans enjoyed a day at the ballpark. But others who couldn’t attend in person were hoping this would finally be the year for Red Sox games to be on the radio. After all, major-league baseball had been broadcast in many other cities since 1921. But it wasn’t until 1925 that any Boston baseball was heard – and it was the Braves, not the Red Sox, who got there first.

Station WBZ broadcast the Braves’ home opener against the New York Giants on April 14, 1925, with popular comedian (and huge baseball fan) Joe E. Brown handling the play-by-play.3 After that, Boston’s WNAC broadcast a few more Braves home games; most of the announcing was done by Boston Traveler sportswriter and cartoonist Charlie Donelan.

But Red Sox owner Bob Quinn seemed in no hurry to allow the team to get on the air. Then, unexpectedly, Quinn relented. On Sunday, April 11, 1926, two days before the Red Sox were scheduled to host the New York Yankees to open their schedule, the Boston newspapers announced that he had given his permission for WNAC to broadcast the home opener.

The choice of WNAC made sense, given the station’s experience carrying the Braves. But although Charlie Donelan’s on-air work had been well-received in 1925,4 he was unavailable to call the 1926 Red Sox home opener: He had returned to cartooning and was teaching courses.5

A Boston Traveler colleague was interested, however – Augustus J. “Gus” Rooney.  Rooney had been the Traveler’s baseball editor since about 1915. Prior to that, he had been the assistant secretary to the World Series champion Red Sox in 1912, and briefly served as secretary and treasurer for Fred Lake’s fledgling Fitchburg (Massachusetts) baseball club in 1914.6 Rooney had never done play-by-play before, but he was up for the challenge. Had he known ahead of time what he was getting himself into, he might have had second thoughts.

While fans were excited about Opening Day, some unseasonably cold weather had hit Boston. The calendar said it was spring, but at Fenway Park it seemed more like winter. Temperatures were in the low 40s at game time, with a chilly wind. But the sportswriters were not going to let a little cold weather upset them: Burt Whitman of the Herald advised the fans to ignore the harsh conditions. It was Opening Day, a great day for a ballgame.7 Ford Sawyer of the Globe agreed. He said the return of baseball brought new hope for the fans. Sawyer sensed a “different spirit” from this Red Sox team, with “a hustle and pep which was not much in evidence last season.”8

The Opening Day festivities included music from Jimmy Coughlin’s 101st Veterans Regiment Band, and a flag-raising ceremony featuring a detachment of Marines. The crowd numbered about 13,000, according to the Boston newspapers – but out-of-town papers called it closer to 11,000. Among the attendees were Governor Alvan T. Fuller and Boston Mayor Malcolm E. Nichols, along with their sons. Mayor Nichols threw out the first pitch, and at 3 P.M. the game began.

Meanwhile, one prominent player almost didn’t get to suit up. When Yankees slugger Babe Ruth arrived with his team, he had to first respond to a warrant from the Massachusetts tax collector, who wanted to question him about the home he owned in Sudbury, about 30 miles from Boston. Ruth had paid no state taxes for several years, claiming that since his primary residence was now New York, he should not have to pay anything to Massachusetts.

Evidently, Tax Commissioner Henry F. Long was unimpressed with that excuse, and Ruth was ordered to appear – which he did and paid what he owed to the State of Massachusetts, returning from the State House in time for the first pitch.9

Yankees manager Miller Huggins was undoubtedly hoping Ruth’s troubles were now behind him. He was counting on Ruth to make more of a contribution than he made in 1925, when he played in only 98 games due to various health issues, and the Yankees finished seventh. Huggins told reporters Ruth was healthy now and in much better shape.10 Red Sox fans were also eager to see Ruth play: Although he had been a Yankee since that fateful trade in 1920, he was still very popular in Boston.

The Red Sox’ starting pitcher was veteran Howard Ehmke, who was very popular with the fans.11  Playing for bad teams had affected Ehmke’s won-lost record, but the Boston sportswriters often praised his skill: The Herald’s Burt Whitman said that Ehmke, opening his fourth season with the Red Sox, was “one of the best pitchers in the game today.”12

This time, however, Ehmke, making his third Opening Day start in four seasons, couldn’t get past the fourth inning. He gave up eight hits and eight runs, walked four, and did not look anything like a star pitcher.13 His successor, Rudy Sommers, wasn’t much better: He gave up three hits and three more runs in the one inning he worked; that included back-to-back doubles from Babe Ruth and Lou Gehrig.

Yankees starter Bob Shawkey was cruising along. By the fifth inning, the Yankees were leading 11-1, and some of the Red Sox fans started leaving, convinced it was pointless to stay at frigid Fenway Park for another minute.

Meanwhile, WNAC’s new play-by-play man, Gus Rooney, wearing a heavy overcoat and trying to ignore the chill, was struggling to maintain interest in a game that seemed like a lost cause; while some of the fans had seen enough, Rooney could not just go home. Back then, the broadcasting crew consisted of one person – the announcer, along with an engineer.

There was no color commentator or sidekick he could banter with. Rooney was basically on his own, and so he began telling stories of games he had seen years ago, and players he used to know, much as a modern-day announcer might do during a rain delay. Then, suddenly, the Red Sox bats came alive, giving Rooney something to talk about in present time.14

In the bottom of the fifth, the Red Sox scored two runs, and in the bottom of the sixth, they drove Shawkey from the game: he gave up six hits and seven runs in 5⅓ innings. He was replaced by Urban Shocker, who gave up three hits and two more runs, walking one, throwing a wild pitch, and hitting a batter in the one inning he pitched.

Thanks to some timely hitting by Ira Flagstead, Phil Todt, and the recently acquired Fred Haney, the Red Sox were clawing their way back: In the sixth inning they sent nine batters to the plate, scoring five runs. And after the next Yankees pitcher, Sad Sam Jones, came into the game, the Red Sox got five more hits and scored two more runs in the 2⅔ innings he pitched.

Unfortunately for the Red Sox, Jones was just good enough to preserve the win. The tying run was on base in the bottom of the ninth, but they could not bring him home. When Todt fouled out, the game was finally over – it took more than three hours for the Yankees to come away with a 12-11 victory. Flagstead had an especially good day for the Red Sox, with four hits – two doubles and two singles; Babe Ruth led the Yankees hitters with two doubles and a single, and he scored three runs.

While the Yankee writers were critical, complaining about the sloppy play and poor pitching,15 the Red Sox beat writers were complimentary. Burt Whitman praised the team for showing “plenty of fight.”  He said this was “the most thrilling opening game in the modern history of Boston’s big league baseball.”16 Melville Webb Jr. noted that the fans who stuck around were glad they did, because the team refused to quit. “The Sox made friends because they fought, and fought hard.”17

As for Gus Rooney, history has not recorded what he thought of the game; and because audiotape had not yet been invented, we have no way of knowing what that first Red Sox broadcast sounded like to WNAC’s listeners. But we do know that Rooney put his heart and soul into doing the play-by-play: He began broadcasting at 2:45 P.M. and did not conclude his on-air work until 6:12 P.M., a marathon broadcast that lasted 3 hours and 27 minutes. It was such a long day, and the weather was so cold, that to nobody’s surprise, he ended up with a sore throat and a mild case of laryngitis.18 And even though the Red Sox lost the game, the fans were undoubtedly glad their team was finally on the air, and grateful that Rooney had done such a good job, under very difficult circumstances.

The author consulted Baseball-Reference.com, Ancestry.com, and various bios on the SABR BioProject site. The author is grateful to John Fredland for his helpful suggestions.

9 While Ruth was dealing with that situation, a police officer ticketed his car, which was parked in such a way that it was blocking traffic. Ruth apologized, telling the officer he expected to be in the State House for only a couple of minutes rather than the two hours it took to settle everything. Fortunately for him, the officer withdrew the ticket when he found out it was Babe Ruth’s car; but the people who were stuck in traffic waiting for him to move the vehicle were probably not as forgiving. “First Boston Visit Marks Hard Day for Babe Ruth,” Springfield (Massachusetts) Republican, April 14, 1926: 8.

13 Ehmke struggled to a 3-10 record and 5.46 ERA by June, and the Red Sox traded him to the Philadelphia Athletics. He closed out his career with five seasons in Philadelphia, most notably recording a complete-game win in Game One of the 1929 World Series and striking out a then-record 13 batters. Lyle Spatz & Steve Steinberg, Comeback Pitchers: The Remarkable Careers of Howard Ehmke & Jack Quinn (Lincoln: Univ. of Nebraska, 2021).