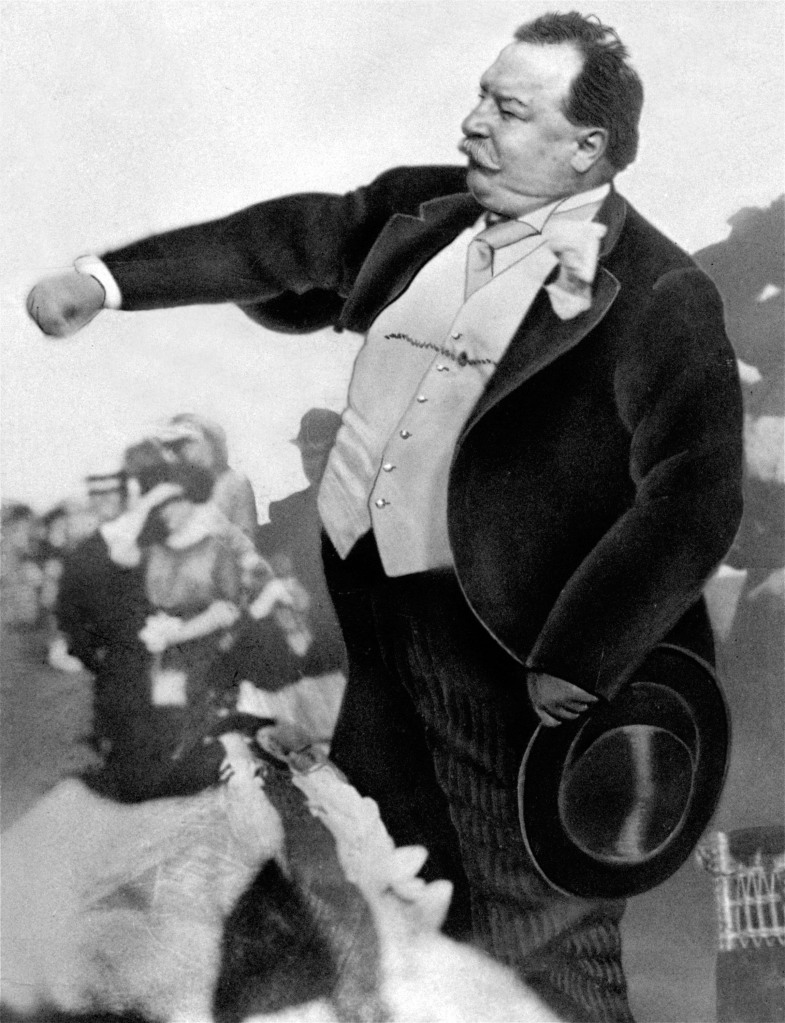 On Opening Day, April 14, 1910, more than 14,000 fans filled the Washington ballpark, beyond its capacity, to see the Washington Senators play the Philadelphia Athletics. Since every seat was taken, people were allowed to sit in the aisles and stand in the outfield near the fences. It was believed to be the largest crowd ever to see a baseball game in Washington. The box seats, which had been auctioned to the highest bidders, were occupied by members of high society, dressed in their finest attire. Numerous politicians and other dignitaries attended the game, most notably President William Howard Taft and Vice President James Sherman. Many were surprised that Taft chose to sit in the first row, near the field, rather than in the stately “presidential box” above the grandstand.

The festive spring day was sunny and close to 70 degrees. The fans sang along to popular songs performed by a brass band. Philadelphia manager Connie Mack and Washington manager Jimmy McAleer walked over to where Taft was sitting and were introduced. The Senators took the field, looking sharp in their new white uniforms. Umpire Billy Evans brought a new baseball to Taft, and Taft made a strong throw to Walter Johnson, Washington’s 22-year-old pitcher, who was on the mound. It was the first time that a president had thrown out the ceremonial first pitch. Johnson tossed the ball to catcher Gabby Street, who stowed it away for safekeeping.

In the top of the first inning, Johnson retired the first three Philadelphia batters by groundouts to the infield. Eddie Plank, the Athletics’ 34-year-old left-hander, took the mound in the bottom of the inning. With one out, Washington’s Germany Schaefer hit a ball that bounced over the crowd in the outfield and over the fence. On a normal day, it would have been ruled a home run, but special rules were in effect with fans in the outfield, and Schaefer’s hit was declared a ground-rule double. Jack Lelivelt followed with a drive to right field that landed in the crowd near the fence. It, too, was a ground-rule double and scored Schaefer to give the Senators a 1-0 lead.

Over the next three innings, Johnson did not allow a hit, while Plank gave up four hits but no runs. Plank was aided by a solid defense. In the third inning, second baseman Eddie Collins dove to stop a groundball and threw to first base while lying on the ground. In the fourth inning, third baseman Frank Baker retrieved a sharply hit ball that had caromed off Plank, and fired to first base in time to retire the batter.

Johnson continued his no-hitter in the top of the fifth inning. The Athletics were overwhelmed by his fastball. He led off the bottom of the fifth by driving the ball to the center-field fence; again, the ground rules came into play and he was held to a double. Clyde Milan beat out a bunt, and then Schaefer placed a double into the crowd in right field, which scored Johnson. Lelivelt’s fly ball to right field was caught by Danny Murphy. Milan scored on the sacrifice, but Schaefer was thrown out at third base by a beautiful throw from Murphy to Baker. After five innings, Washington led 3-0. 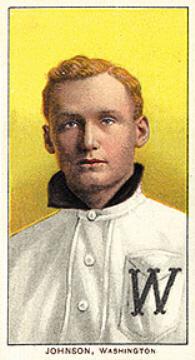 There was no scoring in the sixth inning. With his no-hitter intact, Johnson got Rube Oldring to pop out and Collins to ground out in the top of the seventh. Baker then lifted a fly ball to deep right field. This would normally have been an easy catch for Doc Gessler, but as he went back, he collided with a spectator, and all three – Gessler, the spectator, and the ball – fell to the ground. Baker had a double and broke up the no-hitter. Johnson retired the next batter, Harry Davis, on a popup. In the bottom of the seventh, the Senators loaded the bases on two singles and a hit batsman but failed to score. Neither team got a hit in the eighth inning.

Topsy Hartsel led off the ninth inning with a walk. Johnson struck out Oldring and then got Collins to ground into a force out at second base for the second out. It looked like smooth sailing for the Washington ace until he walked Baker and threw a wild pitch to Davis, which put runners on second and third. The crowd was quiet and tense. With the count full, Davis rapped a ball that was snared by Bob Unglaub at first base, and Unglaub touched the bag to end the game. The final score was Washington 3, Philadelphia 0. Johnson struck out nine batters and walked three in his brilliant one-hitter. Taft stayed for the whole game. “Johnson is a bully pitcher,” he said, meaning superb.

The next day Johnson sent to the White House the ball that Taft had thrown to him, with a request for the president to autograph the ball. Taft put his signature on the ball along with this inscription: “For Walter Johnson, with the hope that he may continue to be as formidable as in yesterday’s game.”

Johnson earned his 33rd career victory that day. He won 384 more games in his formidable career.