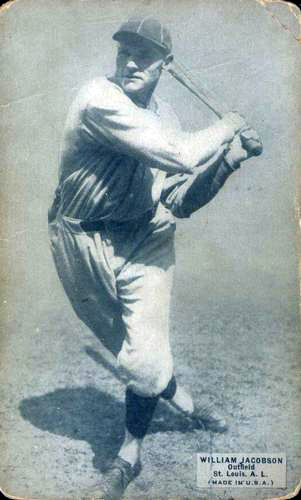 It was only the third day of the 1924 season. A crowd of about 1,000 turned out to Comiskey Park on a Thursday afternoon to watch their White Sox host the St. Louis Browns. According to the Chicago Tribune, the weather forecast was predicted to be “rain and colder” with game time temperatures in the mid 50s.1 In recent seasons, White Sox fans did not have much to cheer about. The White Sox finished in seventh place in both 1921 and 1923, and in fifth place in 1922. Kid Gleason had been let go as manager, and Johnny Evers took the helm, after two turns guiding the Chicago Cubs (in 1913 and 1921). Evers had had a Hall of Fame career as second baseman, but his managerial success was not as noteworthy.2

The two teams split the first two games of the season. In this, the third match of the four-game series, right-hander Sarge Connally toed the rubber for the home team, opposed by the Browns’ Elam Vangilder. Connally had appeared in only eight games in 1922 and 1923, and this was just his third career start. He had pitched two innings of relief on Opening Day against St. Louis. Vangilder, another righty, was in his sixth big-league season, but he was still being used as both a starter and reliever (Urban Shocker, Dave Danforth, Ernie Wingard,and Dixie Davis combined for 110 starts for the 1924 Browns).

The action started in the bottom of the first when the White Sox manufactured two runs. Johnny Mostil led off by working a walk. Harry Hooper followed with another walk, and Vangilder was in trouble. Eddie Collins sacrificed both runners into scoring position with a bunt to the pitcher. Earl Sheely then poked a single to right, driving in the two baserunners. Willie Kamm banged a double to left, but Sheely stopped at third base (and was later out at home on a fielder’s choice), and that was all for Chicago.

In the top of the second, Baby Doll Jacobson led off with a single to right, getting the Browns’ first hit, but the next three batters made outs. Chicago loaded the bases again in the bottom half, on two walks and a single, but they couldn’t push across a run.

When the Browns came to bat in the third, it was their turn to load the bases, using an infield single by Jack Tobin, a one-out double by George Sisler and an intentional walk to Ken Williams, but Marty McManus tapped a roller to Connally on the mound, who threw home to start an inning-ending 1-2-3 double play.

St. Louis finally broke onto the scoreboard in the fourth. Jacobson drilled a triple to deep center. After Hank Severeid trickled a grounder back to Connally for the first out (with Jacobson holding at third), Frank Ellerbe singled up the middle and Jacobson trotted home, making the score 2-1. The White Sox answered immediately, sending seven batters to the plate. Ray Schalk singled to left. Connally hit a grounder to Ellerbe at third, who fired the ball to McManus at second for the force, but the St. Louis second baseman dropped the ball and everyone was safe. The Browns claimed Schalk had “kicked the ball out of McManus’ hands,”3 but the umpire disagreed. Mostil sacrificed, prompting player-manager Sisler to call for an intentional walk to Hooper, and for the third time in four innings, the White Sox had a bases-loaded rally. This time, it was not wasted. Collins singled to right, driving home Schalk and Connally, and when right fielder Tobin couldn’t corner the ball, Hooper scored from first base. That spelled the end for Vangilder. Left-hander Bill Bayne entered as a reliever, making his first appearance of the season. He retired the next two batters, but the score now stood 5-1 in favor of the home team.

St. Louis continued to struggle at the plate. In the sixth Jacobson doubled to right for his third hit. After Severeid struck out, Ellerbe grounded out to third, and Jacobson advanced on the slow play. Bayne drew a walk but both runners were stranded as Connally induced Tobin to ground out to first. Two innings later, with one out, Jacobson “hit into the left field bleachers for a home run.”4

Bayne kept the White Sox bats quiet until the eighth, when “Connally himself singled and made the circuit on the pitcher’s bad throw to second, a safe bunt by Hooper, and Collins’ infield out.”5 He had provided another insurance run, making the score 6-2. Before he batted, though, the argument over Schalk’s suspected kicking the ball in the fourth inning had exploded and “reached its height at this point and Umpire [Ducky] Holmes chased McManus and Williams out of the game.”6

According to the Chicago Tribune, Connally “stuck to the turret for eight and two-thirds innings and then, with only one out to go, worked himself into such a pickle that Chargé d’Affaires Evers had to summon aid from the bullpen.”7 With one out, Tobin dribbled a ball in front of the plate and beat out a single. Connally walked Wally Gerber and then Sisler beat out a grounder to second baseman Collins. With the bases loaded, Joe Evans (who had replaced the ejected Williams) grounded out to second, and Tobin came home with the Browns’ third run of the game. Connally then walked Gene Robertson (who had replaced the banished McManus), loading them up again. Manager Evers had seen enough and rookie Ted Lyons trotted in to try to secure the final out and win. Facing Jacobson, Lyons prevailed, “first shooting over two perfect strikes and then cutting loose one that Jake hoisted into foul territory where Schalk smothered it.”8 Chicago won, 6-3.

The White Sox won their next two games as well but finished April with a record of 7-6. May was worse (9-13), June a bit better (16-13), but Chicago went 34-55 for the rest of the year, not providing much for the fans to cheer about. The Browns finished the season in fourth place, 17 games out of first.

Connally earned his first win of the season. He helped himself at the plate with a 2-for-4 performance, and he scored both times he reached base. Somehow he survived allowing six bases on balls to the Browns. Hooper was 3-for-3 with two walks to lead the White Sox. Vangilder took the loss, and although he allowed only five hits, his five walks had given the White Sox too many opportunities. In addition to Jacobson’s hitting display, Tobin and Sisler each collected two hits.

In addition to the sources mentioned in the Notes, the author consulted baseball-reference.com, mlb.com, sabr.org, retrosheet.org and Jacobson’s SABR biography:

2 Evers began the 1924 campaign as the White Sox skipper. However, he was replaced after a 10-11 start by future Hall of Famer Ed Walsh. After three games (1-2), a third future Hall of Famer, Eddie Collins, took over as player-manager, and Chicago went 14-13 under him. Evers was called back and guided the team for the remainder of the season to a 41-61 record (plus one tie). The White Sox finished dead last in the American League and Evers did not return in 1925. Instead, Collins managed the team in 1925 and 1926.