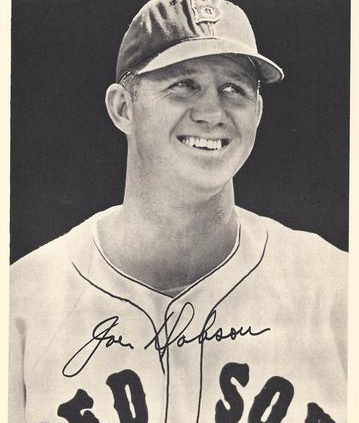 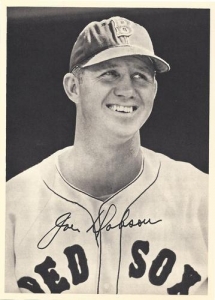 The Patriots Day dual-admission doubleheader at Fenway Park constituted just the second and third games of the 1950 season for the Boston Red Sox and New York Yankees. The Red Sox had lost a 15-10 slugfest to the visiting Yankees the day before, despite starting the game with a 9-0 lead by the fourth inning and having won 21 consecutive home games as they closed out the 1949 season. Scoring 10 runs and losing might in some ways have hinted at a couple of things in the season before them; when it was all over, the Red Sox set a franchise record by scoring 1,027 runs (in a 154-game season), and despite all the runs, they finished in third place, four games behind the Yankees.

The season was almost as young as could be on April 19, though. Joe McCarthy was the Red Sox manager as the 1950 campaign got underway. Joe Dobson was his starter for the 10:00 A.M. first game. Yankees manager Casey Stengel started Vic Raschi. Dobson had been with the Red Sox since 1941, and in the four postwar years had averaged more than 15 wins a season. Raschi was a native of Western Massachusetts. He had been 21-10 in 1949, his first full season with the Yankees. He had beaten the Red Sox four times, including the showdown for the pennant on the last day of the regular season.

Phil Rizzuto led off the game for the Yankees and the New York shortstop drew a walk. First baseman Tommy Henrich made an out and left fielder Gene Woodling grounded into a 6-3 double play.

The Red Sox pounced on Raschi for two quick runs in the first. With one out, third baseman Johnny Pesky singled and left fielder Ted Williams walked. Shortstop Vern Stephens (who had shared the league RBI title with Williams in 1949, both of them driving in 159 runs), drove in his third run of the 1950 season with a single that scored Pesky. Raschi struck out right fielder Al Zarilla, but Bobby Doerr, the second baseman, singled and drove in Williams.

Neither side got a runner on base in the second inning.

The Red Sox got two more runs in the bottom of the third. Raschi had walked in the top of the inning, the only Yankee to reach base. Pesky walked for Boston, leading off the third. It was a chilly morning game (the Red Sox typically play their Patriots Day games in the morning) and Williams followed the walk with his first home run of the year, one that was “well stroked because it had to soar through a stiff east wind before it dropped into the Yankees bullpen.”1 The Boston Globe characterized it as “a towering, well-belted blast.”2 The next three batters all made outs, but the Red Sox had a 4-0 advantage.

Dobson retired the three Yankees he faced in the fourth—Henrich and Woodling made outs and he struck out Joe DiMaggio.

First baseman Billy Goodman singled for the Red Sox in the bottom of the fourth, as did catcher Matt Batts. Dobson bunted to advance the runners but reached base safely himself. With the bases loaded, Dom DiMaggio hit into a 5-4-3 double play, but the fifth Red Sox run scored. Pesky walked. So did Williams, which loaded the bases again. And then Vern Stephens walked, too, forcing in Batts and giving the Red Sox a 6-0 lead. Zarilla took a called third strike.

The Yankees had been held hitless for the first four innings but scored in the top of the fifth, twice. Catcher Yogi Berra singled to lead off. Third baseman Bobby Brown made an out but Berra took second, then scored on a single by right fielder Cliff Mapes. After a second out, Raschi was due up, but Stengel thought it time to make a move and had Dick Wakefield pinch-hit. The move paid off. Wakefield singled and scored Mapes, cutting the deficit to 6-2. And while Raschi had given up six runs, the two Yankees relievers who followed didn’t give up any. Rizzuto made the third out.

Duane Pillette was New York’s new pitcher. He was spared a run when, after Batts hit a two-out single, Dobson doubled, but Batts was out on a relay to the plate, Joe DiMaggio to Rizzuto to Berra.

In the sixth New York got another run. Woodling singled to left field and was able to reach second base on an error by Ted Williams. After a second out, Berra doubled and Woodling scored.

The Red Sox again mounted a threat against Pillette. Dom DiMaggio singled. So did Pesky. And Williams walked. The bases were loaded with nobody out. Stephens flied out to shallow center. Zarilla was called out on strikes again. (Zarilla was 0-for-5 in the game, making outs while a total of 10 Red Sox runners were on the basepaths.) Doerr hit a fly ball to right field. The score remained 6-3, Red Sox—as it did the rest of the game.

After allowing the New Yorkers the three runs he had, “Dobson deftly regained his grip”3 and allowed just one lone single in the final three innings.

Stengel tried a couple of pinch-hitters in the seventh, Jim Delsing, who got that single, and Johnny Mize, but nothing came of it.

Don Johnson pitched for the Yankees in the seventh. He retired the side.

After the Yankees went down in order in the eighth, Pesky walked and Stephens singled for the Red Sox, but neither scored. It was Pesky’s third walk. With a pair of singles as well, he had reached base five times in five plate appearances.

Dobson also set down the Yankees in order in the ninth.

Raschi recovered well and led the American League in winning percentage in 1950, going 21-8 despite an earned-run average that was on the nose at 4.00.

The first game drew 25,425. The 3:00 P.M. afternoon game drew even more—a near-capacity 32,860. The second game saw Boston hop out to a 3-0 lead in the very first inning, but it was a one-sided affair from that point on. The Yankees got 16 runs on 15 hits and an extraordinary 13 bases on balls. The Red Sox totaled seven runs, on 10 hits. The game was called after eight innings due to encroaching darkness.

After three games, the Yankees had scored 34 runs off Red Sox pitching, prompting Arthur Siegel of the Boston Traveler to remind the Red Sox that the word “relief” was defined in part as meaning “removal in whole or part of pain grief, care, anxiety… or anything distressing or burdensome.”4 The Globe’s Harold Kaese titled a brief column “Cheer Up, Fans: Chisox, Browns, Nats Are Coming.”5

Dobson’s game was the one bright light. He had thrown a six-hitter for his (and his team’s) first win of the season.