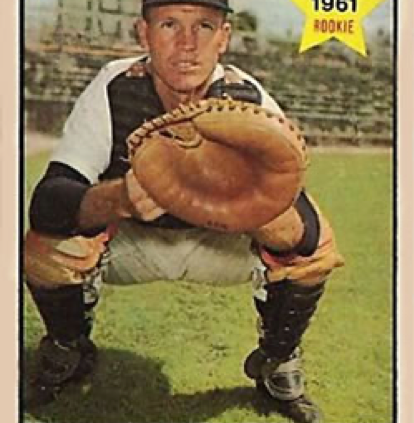 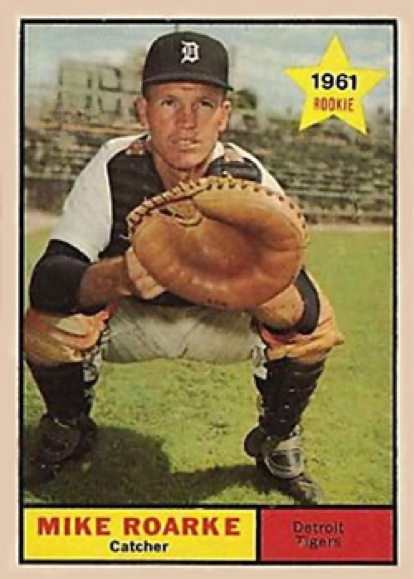 The rivalry between Boston College and Boston University is a deep-rooted part of the city’s sports landscape. In the twenty-first century, this rivalry is probably most visible on the hockey rink, where nationally ranked teams of both male and female Eagles and Terriers face off in fervent competition.

Before BU dropped varsity football (in 1997) and baseball (in 1996), the “Battle of Commonwealth Avenue”1 played out in those sports as well. One memorable baseball matchup took place on Saturday, April 19, 1952, when four future major leaguers — all sons of New England — took the field for a closely played meeting with a nailbiter ending.

This game between two Boston schools didn’t take place in the city proper. At the time, BU’s baseball and football teams played at Nickerson Field in the suburb of Weston. The field was roughly 12 miles west of the city, near the Route 128 north-south beltway road that encircles Boston and its innermost suburbs. It bore the name of William E. Nickerson, a BU trustee and one of the founders of the Gillette Safety Razor Company, who presented the land and athletic facilities to the school in 1928.2 Some of the stands in use at Nickerson Field had been donated by Tom Yawkey, owner of the Boston Red Sox.3

The BC and BU teams met as part of the fifth annual BU Varsity Club Field Day, a fundraiser for BU athletic booster programs.4 The event also included a track meet between BU and Brown University, as well as a football game between the BU team and a squad of Terrier grid alumni. News stories reported that 3,000 people attended the field day. With the baseball game starting at noon, the track meet at 1 P.M. and the football game at 2:30 P.M., it seems likely that fans were free to roam between the events.5

The BC Eagles were coached by Johnny Temple, though not the Johnny Temple who made several All-Star Games as a second baseman in the 1950s and ’60s. BC’s Temple had been an outfielder for the Eagles in the early 1930s before returning to his alma mater as baseball and hockey coach.6 The 1952 Eagles went 12-7 under Temple’s tutelage.7

Going back to 1875, BC had produced 30 major leaguers, including Eddie Waitkus, Lennie Merullo, and the elder Joe Coleman.8 Two members of the 1952 squad were poised to carry on the tradition — infielder Joe Morgan of Walpole, Massachusetts, and catcher Mike Roarke of West Warwick, Rhode Island. Roarke had won a nonsports scholarship to BU but opted for a football scholarship to BC instead.9

BU’s best-known ballplayers were busy on Field Day. First baseman Harry Agganis of Lynn, Massachusetts, doubled as star quarterback for the football team, while catcher Tom Gastall of Fall River, Massachusetts, was a receiver. Agganis and Gastall played in both games that day.10 Later that fall, Agganis found Gastall for a fourth-quarter, game-winning touchdown pass as the Terriers beat William and Mary at Fenway Park.11 The 1952 baseball Terriers posted a 10-4 record.12 BU baseball was coached by Harry Cleverly, formerly a multi-sport star at the university. Cleverly concurrently coached the men’s hockey team to a 211-142-10 record between 1945 and 1962.13

BU starting pitcher Norm Luoni, a lefty from the Boston neighborhood of Dorchester,14 and BC’s righty starter Bill Scholz opened the game with 3½ scoreless innings. The Terriers broke through in the bottom of the fourth, as a single by third baseman Jim Hurley and a double by shortstop Don Russell produced the game’s first run.15

The lead didn’t last long, as BC rebounded for three runs in the top of the fifth. First baseman Jim Cisternelli and Scholz singled and advanced on a sacrifice bunt. A single by left fielder Bill McMorrow scored Cisternelli and moved Scholz to third. Morgan’s pop fly to Russell in shallow left field was deep enough to score Scholz and advance McMorrow. Roarke drove in the third run with a single.16 Outside of this rally, BU’s Luoni pitched well: He pitched a complete game and allowed just three additional hits.17

BU also collected seven hits that day. After being held hitless from the fifth inning through the eighth, the Eagles rallied against Scholz in the ninth. Gastall and pinch-hitter Doug Campbell opened with singles, and a walk loaded the bases with none out. Another Terrier pinch-hitter, Bill O’Donnell, grounded into a fielder’s choice at second base that scored Gastall.18 BU second baseman Johnny Nunziato tried to bring home Campbell from third with a squeeze bunt, but Campbell apparently missed the sign and did not break for the plate. Nunziato reached first safely, though, when Cisternelli dropped the throw. The Terriers had the bases loaded again, with their second- and third-place hitters coming up.19

Coach Temple stuck with Scholz against right fielder John Poce, who struck out for the second out. That brought Agganis to the plate with the game on the line. The “Golden Greek,” hitless so far, fell behind by two strikes, then lofted an easy fly ball to BC center fielder Bill Walsh to end the game at 3-2.

Roarke’s hit in the fifth proved to be the game-winning RBI. Evoking Massachusetts’ revolutionary history, the BC student newspaper declared: “After last Saturday’s performance, B.C. men will probably forget all about Paul Revere and the ‘embattled’ Minute Men to remember April 19 as the day the B.C. Minute Men turned back their Commonwealth Avenue foes with Senior Bill Scholz firing the shot heard round the world.”20

While the major leaguers are the best-remembered participants of the game, a few others went on to play in the minors. Luoni pitched two seasons in the Milwaukee Braves’ system, while Cisternelli played two seasons in the Baltimore Orioles’ organization. Scholz was reportedly eager to pitch professionally but received no offers.21 Incidentally, Scholz and Luoni faced each other in a rematch on May 2 at BC’s Alumni Field. Both went the distance again in a far sloppier game. Scholz surrendered six hits and nine walks and Luoni gave up 11 hits and 12 walks as BC again triumphed, 12-4.22

BU’s future major leaguers went on to star-crossed, prematurely shortened careers. Agganis was hitting .313 in 1955, his second season with the Red Sox, when he began to experience coughing spells and severe pain. After several weeks of hospitalization, Agganis died suddenly on June 27 of a massive pulmonary embolism, shocking sports fans across New England. He was 26.23 His former teammate Gastall also played two seasons in the majors with the Orioles, though unlike Agganis, he was not a starter. On September 20, 1956, Gastall died at age 24 when the small plane he was flying crashed in Chesapeake Bay.24 He appeared in only 52 major-league games.

BC’s star athletes enjoyed long and rewarding lifetimes in baseball. Roarke and Morgan signed with the Boston Braves within a day of each other — Roarke on June 19, 1952, Morgan on June 20. Morgan appeared with five major-league teams in parts of four seasons between 1959 and 1964. He went on to a lengthy career as a major- and minor-league manager, coach, and scout, capped by a fondly remembered tenure as manager of the Red Sox between 1988 and 1991.25 Roarke also played four seasons as a catcher with the Detroit Tigers between 1961 and 1964. He spent 20 seasons as a major-league coach between 1965 and 1994, with stints in the minor leagues in between. Roarke’s last baseball stop was also with the Red Sox, as pitching coach in the strike-shortened 1994 season.26

The story ends with one final connection to major-league baseball. In August 1953, the state of Massachusetts announced plans for a cross-state highway called the Massachusetts Turnpike with an eastern terminus at Route 128, roughly at the site of Nickerson Field.27 The state took the property by eminent domain in 195528 and built the highway as planned, holding opening ceremonies in May 1957 on the site where Terrier athletes once played.29 Anyone who has driven through the busy interchange of Route 128 (now Interstate 95) and the Turnpike has passed the approximate site of the old athletic fields.

BU had a backup plan in place. Less than a week before plans for the Turnpike were announced, BU bought the vacant Braves Field — located near its campus — for a price estimated at $250,000.30 The university transferred the Nickerson Field name to the Boston Braves’ former home. BU also significantly changed and renovated the old ballpark, though it kept a few recognizable features of Braves Field in place. As of 2021, the “new” Nickerson Field is still in use as a venue for BU sports, and also hosts the annual Commencement ceremonies. Nearby on Commonwealth Avenue is Agganis Arena, home rink for BU’s men’s hockey team, dedicated in 2004 in honor of the “Golden Greek.”31

Neither Baseball-Reference nor Retrosheet provides box scores of college games, but the April 20, 1952, edition of the Boston Globe published a box score.

Image of 1961 Topps card #376 downloaded from the Trading Card Database.

1 Commonwealth Avenue, popularly abbreviated to “Comm. Ave.”, is a major street in the city of Boston. It connects the main campuses of BU and BC.

2 “W.E. Nickerson Dead at Age of 76,” Boston Globe, June 6, 1930: 18. William Nickerson was not a BU alumnus; he graduated from another of the Boston area’s renowned universities, the Massachusetts Institute of Technology (MIT).

10 BC’s Morgan and Roarke were also multi-sport athletes. Morgan was an All-American hockey player, while Roarke starred on the football field. But, unlike Agganis and Gastall, they were only called on to play one sport on April 19, 1952.

18 “B.C., Scholz Hand B.U. 3-2 Defeat.” The game story in BC’s student newspaper has Luoni hitting into the force play, rather than pinch-hitter O’Donnell. This story opts for the Boston Globe’s account.

21 Ernie Roberts, “Scholz, B.C. Pitcher, Has Yet to Receive Pro Offer,” Boston Globe, June 13, 1952: 11. The article noted that Scholz could have left school for the minor leagues two years before, but stayed on for a business degree and an ROTC commission.

27 Jerome Sullivan, “Toll Route Ends at 128, Weston,” Boston Globe, August 4, 1953: 1. The plan all along was to extend the road into downtown Boston, but the original route ended in the suburbs; the connector to Boston was added later.

31 BU’s women’s hockey team, also a national power, played as of 2021 in Walter Brown Arena, a facility named for the former owner of the Boston Celtics basketball team and president of the Boston Bruins hockey team.