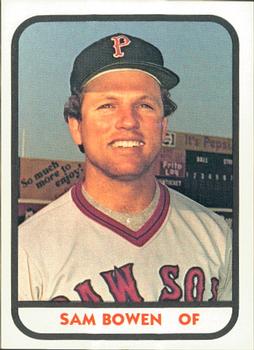 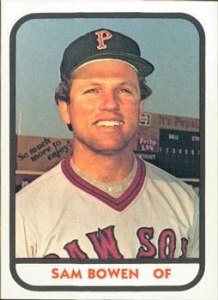 The Pawtucket Red Sox – Bowen’s team – and the Rochester Red Wings of the Triple-A International League had just played 32 innings of baseball in the overnight springtime cold of New England. They started at about 8 P.M. on April 18 and ended in a suspended 2-2 tie shortly after 4 A.M. on April 19.1 (The game was already professional baseball’s longest, even before its resolution. It was eventually completed on June 23, with Pawtucket winning in 33 innings.)

After a scant few hours of rest, the players staggered back to Pawtucket’s McCoy Stadium to play a regularly scheduled 2 P.M. game on April 19. Heading into the bottom of the ninth, that game was tied too, and extra innings again seemed a possibility. But Bowen’s three-run pinch-hit homer saved the players from further exertion, handing the “PawSox” a 6-3 win in a dramatic sequel to the Longest Game.

When the teams knocked off on the morning of April 19, it was an open question whether they would complete the suspended game later that day. About 15 minutes before the regularly scheduled game time, the players learned that the Longest Game would be held for completion at a later date.2 Rochester manager Doc Edwards said the delay was meant to protect the players against injury: “We’re messing with young players and we don’t want to ruin a career for one game. The bodies just aren’t there in the minor leagues.”3

But that generosity didn’t extend to the regularly scheduled Sunday afternoon game, which went on as planned. Right-hander Keith MacWhorter, who grew up and went to college in Rhode Island,4 was Pawtucket’s starting pitcher. It was made clear from the beginning that he would also be Pawtucket’s finisher. Before the game, MacWhorter found a baseball in his locker with the words “You’re on your own” written on it.5 Seven Pawtucket pitchers had appeared in the Longest Game, and all had worked at least 3⅔ innings.6 With the bullpen spent, MacWhorter would have to carry the load himself.

The 25-year-old MacWhorter, who relied heavily on a sinking fastball and slider, had appeared in 14 games with Boston in 1980 – his only major-league experience. For the full 1981 season at Pawtucket, he went 7-10 with a 4.43 ERA in 28 games, including 23 starts. He pitched five complete games and one shutout and distinguished himself in only one statistical area: His eight hit batsmen tied him for second among IL pitchers.7

Rochester manager Edwards had somewhat more flexibility, having used only four hurlers in the 32-inning game.8 Red Wings relievers Steve Luebber and Jim Umbarger had combined for 18 innings of 10-hit, one-run relief. Edwards tapped 23-year-old righty Tom Rowe to start on April 19. In his fifth minor-league season, Rowe posted an 8-9 record and 4.34 ERA in 28 games, all starts, including eight complete games. A second-round pick by Baltimore in the January 1977 draft, Rowe pitched 11 pro seasons – including parts of five at Triple A – but did not reach the majors.

Shaking off their fatigue, the PawSox got on the scoreboard in the bottom of the first inning. Three straight singles by second baseman Marty Barrett, designated hitter Chico Walker, and left fielder Russ Laribee loaded the bases. First baseman Dave Koza, who eventually won the Longest Game by driving in Barrett with an RBI single, hit into a fielder’s choice to score Barrett for a 1-0 lead.9

MacWhorter, meanwhile, fulfilled manager Joe Morgan’s dreams for the first four innings by holding the Red Wings hitless. In the fifth, though, he got into his only serious jam of the game. First baseman Dan Logan led off with a single, and MacWhorter hit third baseman Floyd Rayford with a pitch. Right fielder Drungo Hazewood, a first-round draft pick by Baltimore in June 1977, hit a home run to left-center field to give Rochester a 3-1 lead. It was Hazewood’s only homer for the Wings that season and represented three of the six RBIs he collected at Triple A that year. In 18 games with Rochester, Hazewood hit just .094 with 22 strikeouts; he spent most of the season at Double-A Charlotte.10

The PawSox cut the deficit to 3-2 in the bottom of the fifth, thanks to the same players who had sparked their first-inning success. Barrett drew a walk, Walker singled him to third, and Laribee hit into a run-scoring fielder’s choice.

Walker went only 2-for-14 during the Longest Game, but his bat sizzled in the Sunday game. In the seventh inning, with Rowe still on the mound, Pawtucket center fielder Lee Graham led off by doubling to right-center field. Walker followed one out later with his third hit of the game – a tough grounder that Rochester shortstop Cal Ripken Jr. couldn’t corral – and Graham scored to tie the game, 3-3.

Ripken, who began his Hall of Fame career with the Baltimore Orioles four months later, in August, went 2-for-13 in the Longest Game and 0-for-4 in the next day’s game. He struck out three times on April 19 and wasted an eighth-inning opportunity by popping out with a runner on second. The Red Wings put the leadoff runner on base in each of the final three innings but could not get them past second base.

The other future Hall of Famer in the April 19 game fared only slightly better. Pawtucket third baseman Wade Boggs, hitting sixth in the lineup, went 1-for-4 with a double.11 He also committed the game’s only error. Boggs hit .335 for Pawtucket that season, nudging out Richmond’s Brett Butler for the league lead, and began his 18-season major-league career with Boston the following season.

As ordered, MacWhorter pitched a complete game – and a solid one, allowing only five hits. He walked only one batter and struck out nine. First baseman Logan was the only Red Wing with more than one hit, collecting singles in the fifth and seventh innings. He also ended a potential rally in the ninth: After designated hitter Tom Chism collected Rochester’s final hit, Logan grounded into a double play.

Rochester starter Rowe worked into the ninth as well, but there his good fortune ran out. Rowe issued his seventh and last walk of the game, to leadoff hitter Graham. Barrett sacrificed the runner to second base. Left-handed reliever Brooks Carey replaced Rowe and intentionally walked the red-hot Walker.

Morgan sent righty-swinging Bowen to the plate to pinch-hit for lefty Laribee. Bowen, a native of Georgia, played the entire Longest Game in right field for the PawSox, going 2-for-12. He’d been a central participant in two key plays. In the 26th inning, he belted a deep, hard-hit drive to left field that might have won the game if a stiff wind hadn’t kept it in the ballpark.12 And in the 32nd, he threw out Rochester’s John Hale at home plate to keep the game tied.13 Bowen had had three cups of coffee with Boston, in 1977, 1978, and 1980, playing a combined 16 games. He would not return to the majors.14

Carey gave way to Rochester’s third pitcher, righty Don Welchel, a 24-year-old Texan who went on to appear in 13 big-league games in 1982 and 1983. Welchel fell behind in the count 3-and-1, then served up a pitch that Bowen belted deep to right-center field.

This time around, no stiff headwind would deny Bowen. His drive cleared the fence for a three-run shot that gave Pawtucket a 6-3 walk-off victory. The 892 fans on hand went home happy. One imagines that most of the players did as well: Working one overtime shift in a day is enough.

Rochester finished the season with a 69-70 record, in fourth place in an eight-team league, 19 games behind first-place Columbus, a New York Yankees farm team. Pawtucket finished in sixth place at 67-73, 21½ games out. Both clubs achieved a measure of lasting fame – the kind not often granted to minor-league teams – for their participation in the Longest Game.

Neither Baseball-Reference nor Retrosheet provides box scores of minor-league games, but the April 20, 1981, edition of the Rochester (New York) Democrat & Chronicle published a box score.

3 Associated Press story printed in the St. Petersburg (Florida) Times, April 20, 1981: 1C. The “headline” on the story was the 32-inning line score from the suspended Longest Game.

4 MacWhorter was born in Worcester, Massachusetts, while his father was working a temporary job there, but grew up in the Providence area and attended Bryant College (now Bryant University) in Smithfield, Rhode Island. Bill Nowlin, “Keith MacWhorter,” SABR Biography Project. Accessed online January 28, 2022.

6 An eighth Pawtucket pitcher, Bob Ojeda, worked a single inning – the top of the 33rd – and earned the win when the Red Sox scored in the bottom of the inning.

7 MacWhorter’s Pawtucket teammate Danny Parks, who started the Longest Game for the PawSox, led the league with 11 hit batsmen in 181 innings. MacWhorter, who worked 132 innings, and Richmond’s Steve Bedrosian, who pitched 184 innings, tied for second with eight apiece.

8 Two additional Rochester pitchers, losing pitcher Steve Grilli and Cliff Speck, appeared in the bottom of the 33rd inning when the game was resumed.

9 All play-by-play information is taken from “HR Beats Wings, 6-3.” The author also consulted an Associated Press story that appeared in several newspapers on April 20, 1981, but it did not add detail.

14 Boston had attempted to trade him to the Detroit Tigers for pitcher Jack Billingham in May 1980, but Detroit canceled the trade after Bowen told them he had an injured leg. Bill Nowlin, “Sam Bowen,” SABR Biography Project, accessed January 29, 2022. This incident is also recounted by Barry in Bottom of the 33rd.