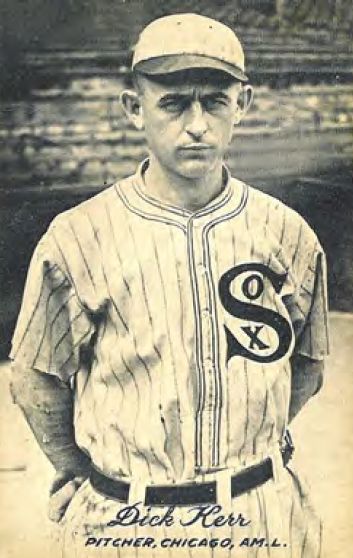 There was a dark cloud over Comiskey Park in Chicago as the Chicago White Sox hosted the Detroit Tigers in the opening home game of the 1921 American League season. It had nothing to do with the weather. After losing the 1919 World Series to the underdog Cincinnati Reds, Chicago had finished second in 1920, two games behind the Cleveland Indians in the American League.

However, all was not well in Chicago: On September 29. 1920, fans awakened to the following headline in the Chicago Tribune: “Two Sox Confess; Eight Indicted: Inquiry Goes On.”1

The October indictments were dismissed by the prosecution on March 22, 1921, for strategic and technical reasons, and the players and gamblers were indicted again on March 26. Baseball’s first commissioner, Judge Kenesaw Mountain Landis, had been elected to the position on November 12, 1920. Landis decided to place the seven indicted players on the ineligible list pending the disposition of the case.3

For the start of the 1921 season, the suspended players were replaced by others. At first base it was Earl Sheely (in place of Shano Collins, who had replaced Gandil in 1920). Replacing Risberg at short was Ernie Johnson. Eddie Mulligan replaced Weaver at third base, and Bibb Falk and Harry Hooper replaced Jackson and Felsch in the outfield. Replacing Cicotte and Williams on the pitching staff were Roy Wilkinson and Dominic Mulrenan.

This was the first White Sox game in Chicago after the eight players had been suspended.

Chicago opened the 1921 season on the road at Navin Field in Detroit by splitting a two-game series against the Tigers and then traveled to St. Louis, where they lost twice to the Browns. The game on April 21 was the first in front of the hometown fans at Comiskey Park, who numbered at around 25,000 for the game.4

The pitching matchup featured Howard Ehmke for Detroit and southpaw Dickey Kerr for Chicago. Ehmke had been in the major leagues since 1915, except for 1918 when he was in the military service. Kerr was in just his third season in the major leagues and was coming off a 21-9 season in 1920. He had won two games in the 1919 World Series despite some of his teammates conspiring to fix the Series.

Kerr had an easy first inning, getting the first three Tigers batters in order, Ralph Young on a groundout, Donie Bush on a pop fly to first, and Ty Cobb on a fly ball to center field.

Ehmke gave up a leadoff double to Hooper, who was sacrificed to third base by Ernie Johnson. A single by Eddie Collins scored Hooper and Chicago took a 1-0 lead.

In the top of the second inning, Bobby Veach hit a leadoff single and went to third base on a double by Harry Heilmann. There was no advance of the runners on Bob Jones’s groundout to second base, but Detroit first baseman Lu Blue singled to score Heilmann and Veach, giving the Tigers a 2-1 lead.

Ehmke walked the bases full with two outs in the bottom of the second, but got Eddie Collins to ground out to end the threat.

In the top of the third inning, Bush singled with one out and stole second base. He scored on a triple by Cobb that made the score 3-1, Detroit.

Chicago tied Detroit in the bottom of the fourth inning, beginning with a leadoff single by Ray Schalk, who was sacrificed to second by Kerr. Hooper’s single put Schalk on third base. Schalk scored on a sacrifice fly by Ernie Johnson. Hooper stayed at first. After stealing second base with Eddie Collins at the plate, Collins hit a single to left field that scored Hooper and tied the game, 3-3.

Kerr got Detroit out in order in the fifth and sixth innings.

Chicago added three runs in the bottom of the sixth. Schalk walked with one out and went to second when Ehmke walked Kerr. Hooper’s double scored Schalk and sent Kerr to third. Kerr and Hooper scored on a single by Johnson. The inning ended with Chicago holding a 6-3 lead.

Doc Ayers replaced Ehmke in the bottom of the seventh inning and issued a one-out walk to Amos Strunk. Eddie Mulligan reached on an error by Bush at shortstop. Schalk’s groundout advanced Strunk to third and Mulligan to second, and Kerr’s double scored both runners to give Chicago an 8-3 lead.

At this point, the Chicago Tribune’s I.E. Sanborn wrote, “The combat was terminated by a combination hail and thunderstorm with two men out in the top of the eighth inning.”5

Standouts for Chicago in the game, Sanborn wrote, were “Wee Richard Kerr, Harry Hooper and Eddie Collins, the Diminutive south paw baffled the Cobbites completely in all except two of the seven rounds permitted by the weatherman.”6 Hooper, the former Boston Red Sox star, “made himself solid with more than 25,000 fans by the way he whaled the pill and covered the territory in the shadow of the right field bleachers.”7 Hooper had two doubles, a single, and a walk and scored three runs. Sanborn added: “Collins scored Hooper twice with timely hits.”8

Neither the Tigers nor the White Sox had a particularly good 1921 season. Detroit finished with a record of 71-82, in sixth place in the American League, 27 games behind the pennant-winning New York Yankees. Chicago finished 62-92, in seventh place, 36½ games behind New York.

Even though the White Sox players were cleared in court of the second indictments on August 2, 1921, Landis ignored the jury’s not-guilty verdict and the next morning he banned the eight White Sox players for life and irrevocably altered their lives.9