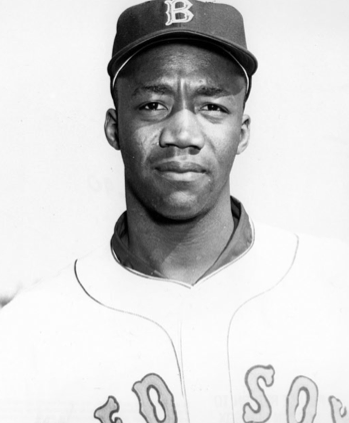 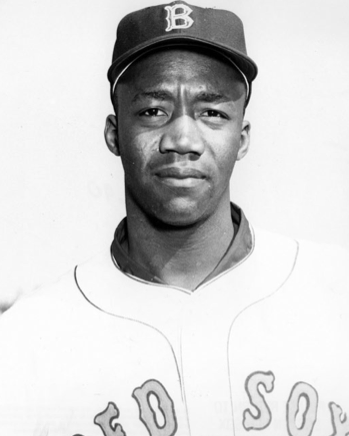 Pumpsie Green’s successful Millers debut was nearly set back when the car in which he was riding in a morning parade down Nicollet Avenue in downtown Minneapolis ran out of gas.1

The parade was the idea of the Minneapolis Chamber of Commerce as a way to introduce fans to an entirely new 1958 Millers team.

When the Millers’ parent club, the New York Giants, announced they were moving to San Francisco for the 1958 season, the Boston Red Sox swapped ownership of their top farm team, the San Francisco Seals of the Pacific Coast League, for the Millers, enabling the Giants to move into San Francisco.

Green, born in Boley, Oklahoma, and named Elijah Jerry at birth, came from an athletic family. His brother, Cornell, was a longtime starting safety for the Dallas Cowboys in their early years in the National Football League. The family moved to Richmond, California, when he was a child.

By the time he reached Minnesota, Green had already made stops in Wenatchee, Washington; Stockton, California; Albany, New York; Oklahoma City, and San Francisco. He was purchased from Stockton by the Red Sox in 1955 and immediately showed good fielding skills and a strong arm while playing mostly at shortstop.

The Minneapolis Chamber of Commerce and the Minneapolis Minutemen, a local sports booster group, reflected the general disdain of local fans in their dislike for the Giants, who were being strongly courted to relocate to the new Metropolitan Stadium (opened in 1956) in suburban Bloomington. The stadium was built to attract a major-league team, and the logical team was the Giants.

The Chamber and the Minutemen wanted to show the major leagues that they had snubbed a logical candidate for either expansion or relocation. With the strong support of the local media, they mounted an aggressive drive for a large Opening Day crowd.

Millers business manager George Brophy said more than 10,000 tickets were sold for the opener, but the combination of cold weather and a strong wind held actual attendance to a league-best 8,513. For the season the Millers drew a total attendance of 152,533, an average of 1,994 per game.

The most direct route from Minneapolis to the ballpark went past Lake Nokomis and down Cedar Avenue, through Richfield into Bloomington. Most of the land between 66th Street and the ballpark was still farmland. Fans headed for the game listened to the number one hit on WDGY (1130 AM), “He’s Got the Whole World in His Hands,” by British 14-year-old Lorrie London.

Meanwhile, at the ballpark, Gene Mauch, a 32-year-old in just his second stint as a manager, worked on his starting lineup against Louisville Colonel lefty Ron Babkoff.

Despite a slow start at the plate, Mauch (2-for-28) penciled his own name into the starting lineup, batting sixth and playing third base.

As the Millers were called from the dugout for the pregame introductions, the largest ovation, according to local columnist Dick Cullum, was directed at Green.2

African-American players were not unusual in Millers starting lineups. Future Hall of Famers Ray Dandridge, Willie Mays, and Monte Irvin had all spent time starring for the Millers since Jackie Robinson broke the baseball color barrier in 1947.

By 1957 most major-league teams featured Black players in their starting lineups. Larry Doby, a Cleveland outfielder, became the first Black player in the American League in 1947.

Ten years later it was a rarity for a major-league team to not have a Black player, but the Red Sox were beginning to draw attention for their lack of color. It was not a question of if so much as when, and a look at the Red Sox minor-league system quickly identified Green as the most logical prospect.

That speculation proved correct when Green was called up in midseason of 1959, making the Red Sox the final major-league team to integrate. Green made his major-league debut on July 21, 1959, as a pinch runner for Vic Wertz. Less than a week later, his Millers teammate, African-American starting pitcher Earl Wilson, was called up to join Green with the Red Sox.

Things got off to a bad start for the Millers in the 1958 opener. After a scoreless first inning Louisville took advantage of starter Jack Spring’s wildness. Louisville shortstop Frank Di Prima’s double gave his team a 4-0 lead.

The damage could have been worse in the third when Spring walked two batters and was clearly struggling with his control.

Mauch summoned veteran Harry Dorish from the bullpen. Outfielder Jim Pyburn lined a Dorish pitch to the outfield gap, but Umphlett made a diving catch that Louisville manager Del Wilber later called the defensive play of the game.3

Hitless in two innings against Babkoff, the Millers loaded the bases in the third on a double by Sadowski, a walk to Dorish, and Umphlett’s single. Not wanting to walk in a run, Babkoff grooved a pitch that Green lined solidly over the 380-foot sign in left-center to tie the game.

“First bases-loaded homer I’ve ever hit,” Green told reporters after the game. “I was guessing fast ball all right, and I knew it was good for a base hit between the outfielders … but I didn’t think it was going over the fence.”4

An inning later Malmberg gave the Millers a 5-4 lead with his first home run of the season.

The Millers added a sixth run in the fifth on a single by Throneberry, a hit-and-run single by Kellert, and Schult’s fielder’s-choice grounder to third.

In the sixth the Millers put the game out of reach with four more runs. Malmberg reached base on the second error by Louisville third baseman Bob Barron. Sadowski followed with a single, and Dorish drove in a run with a sacrifice fly. Umphlett doubled to right and Green’s infield hit scored Sadowski. Throneberry was walked intentionally. A balk, a walk to Kellert, and a double by Schult gave the Millers a 10-4 lead.

The Millers went on to win the game 11-6. Umphlett, Green, and Sadowski had two hits each, and Green led the attack with five runs batted in.

Dorish pitched six innings in relief, giving up on four hits and two earned runs while walking one and striking out three. Tom Hurd relieved a tiring Dorish in the ninth and recorded the final two outs.

After the game Wilber told Minneapolis Tribune sportswriter Sid Hartman that he would pick the Millers as the favorite to win the American Association title. “These Millers have power,” he said. “They showed it to you today. To have a good club you need speed, defense, pitching and power. Minneapolis has them all.”5

Wilber’s prediction turned out to be accurate. The Millers finished with an 82-71 record. They defeated the Wichita Braves four games to two in the first round of the playoffs and swept the Denver Bears four games to none in the final round.

Under close scrutiny by the Red Sox, Green finished the season with a .253 batting average, 6 home runs, and 43 runs batted in. He did show an excellent batting eye, leading the league with 107 walks. He was hitting .320 in 98 games when he was called up in 1959.

Hall of Famer Jimmie Foxx, one of Mauch’s coaches, had some first impressions of Metropolitan Stadium. In the course of his major-league career he had a .325 batting average with 534 home runs. His last plate appearance was in 1945. Asked what he thought of the Met, he told Minneapolis Star sportswriter Jim Byrne, “I’d like to hit in this ballpark, especially when the wind is blowing like it was today. Now, I guess it’d be better if I did the hittin’ and let someone else do the runnin’.”6