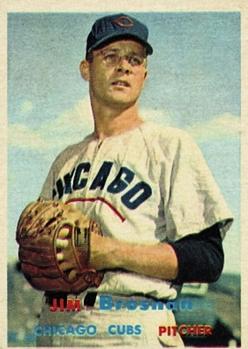 SABR’s Mark Armour gets little argument to his claim, “[Jim Brosnan’s] legacy will remain his writing, especially his two classic books [The Long Season and Pennant Race].1 Yet, Brosnan left behind another legacy, this one less desirable. He was one of a trio of Cubs pitchers who in 1957 set a National League record that still stood in 2020. The threesome, Brosnan, Moe Drabowsky and Jackie Collum, on April 24, 1957, issued nine bases on balls to Cincinnati batters in one inning. It took the three hurlers 37 minutes to record three outs in the fifth inning. The triad broke the long-standing NL record set on May 4, 1910, when three Reds pitchers2 walked eight St. Louis Cardinals batters in a single inning.

The Cubs were coming off a miserable 1956 season. They finished in last place, 33 games behind the champion Brooklyn Dodgers. The Redlegs were third in 1956, but just two games behind the Dodgers.

Cincinnati began 1957 with four consecutive losses but won its next two games before the Cubs visited Crosley Field for a two-game series. Moe Drabowsky, coming off a four-hit win over the Cardinals six days earlier, got the start for Bob Scheffing’s Cubs. Manager Birdie Tebbetts sent Joe Nuxhall to the mound for the Redlegs. A slim crowd of 7,212 witnessed the game and the record-breaking inning.

Fans were treated to a stellar defensive play in the bottom of the first inning. Alex Grammas led off the game for the Redlegs with what appeared to be a base hit between Casey Wise at second and Ed Mickelson at first. But Wise went far to his left, grabbed it, and threw to first for the out.

The Cubs drew first blood in the top of the second inning. With one out, Jim Bolger hit his first home run of the season, over the right-field screen. After an infield popout, catcher Cal Neeman hit what was described as a “Ruthian sock over the leftfield fence,”3 his second home run of the young season.

Meanwhile, Drabowsky was having no trouble with the Redlegs. He retired the side in order in the first, ending with a Gus Bell strikeout. The rookie right-hander struck out the side in the second, fanning Wally Post, George Crowe (looking), and Ed Bailey. He kept Cincinnati scoreless until the bottom of the fourth, when Bob Thurman’s long solo home run, his second of the season, put the Redlegs on the board.

The Cubs went down in order in the top of the fifth. They led 2-1 as the Redlegs came to bat in the bottom of the inning.

Ed Bailey led off. He sent a fly ball to deep center. Bobby Del Greco ran up the Crosley Field embankment and made the catch.

Then, without warning, Drabowsky’s control abandoned him. He walked Don Hoak. A four-pitch walk to Roy McMillan followed.

Nuxhall came up to bunt but walked to load the bases. Jerry Lynch pinch-hit for Alex Grammas and walked on four pitches, forcing in a run. The game was tied, 2-2.

Lefty Jackie Collum came in to relieve Drabowsky but the Cubs’ control did not improve. On a full count, he issued the inning’s fifth consecutive walk, to Thurman. McMillan scored the go-ahead run.

Bell’s groundout scored Nuxhall, but the Cubs were still one out from returning to the dugout. Wally Post was issued an intentional pass to load the bases, and George Crowe was next up.

The Cubs wanted the lefty-lefty matchup, but Crowe spoiled the strategy. He blooped a pop single to short right-center, driving in two runs for a 6-2 Redlegs lead.

Bailey came up for the second time in the inning. Collum walked him to load the bases.

Scheffing, in his first year at the helm in Chicago, went to the bullpen again, summoning Brosnan to replace Collum. A frustrated Collum began squawking from the bench and was ejected by home-plate umpire Stan Landes.

Brosnan brought no immediate solution. He issued Hoak’s second walk of the inning, forcing in another run. The lead was 7-2.

McMillan was the next batter. Brosnan walked him for the second time in the inning, forcing in yet another run. The “Professor”4 struck out Nuxhall to end it, but not before seven runs had scored on one hit — Crowe’s bloop single. The Redlegs had seized an 8-2 advantage.

The Cubs got one back in the top of the sixth, but the Redlegs answered in their half of the seventh off Vito Valentinetti. Post hit a leadoff double and Bailey singled him home.

Ahead 9-3, Nuxhall walked Del Greco to open the eighth inning. Ernie Banks, mired in an early-season slump, hitting below .200 with no runs batted in, connected for a 390-foot, two-run home run to get the Cubs closer. Left-hander Don Gross came on to relieve Nuxhall. He closed out the Cubs, retiring six straight with three strikeouts to clinch the win.

After the game, Drabowsky attempted to explain the inning when everything fell apart for Chicago, indicating his curve was coming in too high and his fastball was going wide. He added, “Then, I guess I started to press.”5

The Cubs had high hopes for the 22-year-old Drabowsky at the start of the season. No less a talent than Waite Hoyt called Drabowsky “one of the best pitchers I’ve seen come up since Dizzy Dean.”6 Drabowsky was said to have had “the poise and talent of a pitcher who might, for all anyone could tell without knowing better, have been in the majors for 10 years.”7 Despite the praise and high expectations, things did not go smoothly. “Moe can’t locate plate,” wrote Ed Prell in The Sporting News. “Drabowsky is the major disappointment of the staff. Big Moe was a whale of a pitcher in the final weeks of the 1956 season after the Cubs grabbed him out of Trinity College in Connecticut. … [His struggles are] mostly because of wildness.”8

Drabowsky went on to win 13 games for the seventh-place Cubs in 1957. It was the most single-season wins he’d have in a 17-year career; his best years came after he moved to the Baltimore Orioles bullpen in the 1960s. A month after the April 24 game, Jackie Collum and Vito Valentinetti were traded to Brooklyn for right-handed pitcher Don Elston. Collum wrapped up a nine-year major-league career by appearing in one game for the Cleveland Indians in 1962. Jim Brosnan became a Red in 1959 and was part of Cincinnati’s pennant-winning 1961 team, as chronicled in his book, Pennant Race.

Thanks to John Fredland for reviewing and editing an earlier draft of this article, Thomas J. Brown Jr. for fact-checking, and Len Levin for copy-editing.