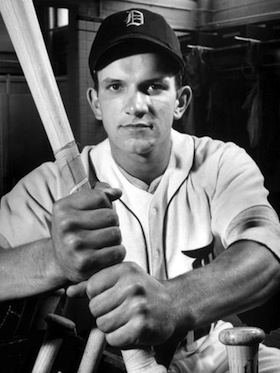 The 1948 Detroit Tigers finished in fifth place, snapping a string of four consecutive top-two finishes, including a World Series win in 1945. The hopes for a Tigers turnaround in 1949 rested in part on a player who had played in only 12 major-league games in his career, 22-year-old center fielder Johnny Groth.

Groth first gained the attention of major-league baseball while in the US Navy in 1945 where he played baseball for Bob Feller on a team that included several major-league players, including Mike “Pinky” Higgins. Upon his discharge, Groth was the subject of a bidding war between Feller’s Cleveland Indians and Higgins’s Detroit Tigers. The Tigers won the battle in late 1946, giving Groth a $30,000 signing bonus and a three-year contract at $5,000 per year. After a brief stint with the Tigers at the end of the 1946 season, Groth starred for Williamsport in the Eastern League in 1947 and Buffalo in the International League in 1948,1 with brief late-season cameos with the Tigers both years. By 1949, Groth was ready to step in as the Tigers’ everyday center fielder.

On Opening Day, Groth hit two home runs, one of them inside-the-park. He followed that up the next day with a grand slam. Entering play on April 26, 1949, Groth had scored or driven in (or both) 11 of the 20 runs the Tigers scored in their first five games.2

Groth’s hot start to that point had attracted the attention of baseball writers around the country. John C. Hoffman of the Chicago Sun-Times referred to him as “the phenomenal Johnny Groth.”3 Dent McSkimming of the St. Louis Post-Dispatch described Groth as “[t]he young man [who] has already won more newspaper space and radio time than any baseball hero here since Mickey Cochrane’s day.”4 Three Hall of Famers had won four MVP awards as Detroit Tigers since Cochrane’s last season as the Tigers’ regular catcher in 1935.5

Groth had grown up on the north side of Chicago, graduating from Chicago Latin School. On April 26, 1949, the Tigers came to Chicago to play a doubleheader against the Chicago White Sox, his first appearance in his home town.

Groth’s homecoming was a very big deal. He got his own story on the front page of the April 27 Chicago Tribune sports section.6 Among the fans at the game were Groth’s fiancée, his sister, and his mother. According to the Tribune, his mother “was seeing Johnny play his first baseball game, except for sandlot contests when he was young.”7 Groth’s alma mater, Chicago Latin School, “was let out for the afternoon to honor Johnny” and the Comiskey crowd included “a number of present and former Chicago Latin students,” including at least one former high-school teammate, as well as his high-school coach.8

Groth’s first at-bat came in the top of the second inning. The game was scoreless, but Groth had two teammates on base, Hoot Evers (who had singled) and Aaron Robinson (who had walked), with nobody out. After Judson balked, putting the baserunners on second and third, the hometown hero “smashed a single off [third baseman] Floyd Baker‘s glove … to drive home the first two Detroit runs.”9 Groth was forced out by Sam Vico, who came around to score on a sacrifice and an RBI single by Neil Berry, and the Tigers had a 3-0 lead that they would not relinquish.

The Tigers added three runs in the top of the seventh on a three-run home run by Vic Wertz, knocking Judson out of the game. The White Sox got two runs in the seventh off Trucks. Trucks gave up back-to-back singles to start the eighth, but Dizzy Trout came on to pitch the final two innings, and the Tigers held on for a 6-2 victory.

Groth finished the first game 1-for-4.

The game was a terrific back-and-forth affair. The Tigers scored two in the top of the first, on RBI singles by Vic Wertz and Aaron Robinson. The White Sox answered with three in the bottom of the second on back-to-back RBI doubles by Don Wheeler and Floyd Baker.

The Tigers took a 5-3 lead in the third, on a three-run home run by Aaron Robinson. But the White Sox cut the Tigers’ lead to one in the fourth on a double by Gordon Goldsberry and Baker’s RBI single.

In the ninth inning, singles by Herb Adams, Luke Appling, and Gus Zernial off Tigers reliever Marlin Stuart brought in the tying run and put Appling on second base with the potential winning run with only one out.

The Tigers brought in Trout, who had saved the first game, and he got Cass Michaels to ground into a force play for the second out, with Appling moving to third base. Goldsberry walked, but George Yankowski hit into a force play and the game went to extra innings tied, 5-5.

Meanwhile, through the first nine innings of the second game, Groth had gone 0-for-4, leaving him 0-for-7 since his RBI single in the opener.

Johnny Lipon and George Kell walked for the Tigers to start the 10th inning against White Sox reliever Bill Evans, bringing former Tiger (and Detroit native) Billy Pierce in to pitch for the White Sox.

A sacrifice bunt by Vic Wertz put both runners in scoring position and an intentional walk to Hoot Evers loaded the bases, but pinch-hitter Don Lund struck out for the second out.

Two outs, bases loaded, tie game, extra innings. And up to bat stepped the hometown hero. Groth’s first at-bat of the doubleheader produced two runs. He had done nothing since then, but what would this at-bat produce?

“With the count 2-2 Groth laced one down first. The ball barely nicked the top of first base and rolled into foul territory in right for a double, scoring two big Tiger runs.”10

The “phenomenal Johnny Groth” had done it again!

Trout pitched a scoreless bottom of the 10th inning and the Tigers won the second game, 7-5. With the doubleheader sweep, the Tigers improved to 5-2, good for second place, 1½ games behind the New York Yankees.

Groth finished the month of April batting .439, before an inevitable slump. His rookie season came to a premature end on August 19 when he broke his wrist in a collision at first base. He ended the season batting .293 with 11 home runs in 103 games. The Tigers were 63-53 at the time of Groth’s injury, finishing the season in fourth place at 87-67.

Groth came back in 1950 to have what was probably the finest season of his career, batting .306 in 157 games as the Tigers finished in second place (95-59), only three games behind the Yankees. Groth ended up having a 15-year career that extended through 1960 and saw him play in 1,248 games. But the 1949 and 1950 seasons remained his two best seasons. And he always had April of 1949 when the “phenomenal Johnny Groth” was the toast of the baseball world.

In addition to the sources cited in the Notes, I used the Baseball-Reference.com and Retrosheet.org websites.

For games for which Retrosheet does not have complete play-by-play data, volunteers do deduced play-by-play from contemporary newspaper accounts and other available information. I had the pleasure of deducing several Tigers games from April 1949, including this doubleheader.

6 Robert Cromie, “Groth Makes a Hit With the Folks at Home,” Chicago Tribune, April 27, 1949: section 3, pages 1 and 3. The story included a picture of some of the fan signs at Comiskey Park — “Yea Groth,” “Welcome Home Johnny Groth” — and a picture of Groth and his fiancée, Betty Stoll, who attended the game. They were married that fall.