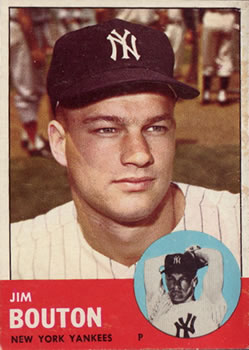 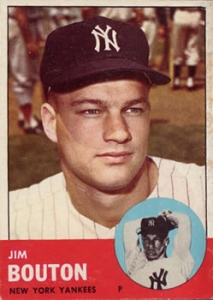 Jim Bouton led the nomadic life of a baseball maverick, with stops including New York City; Seattle; Houston; Portland, Oregon; Durango, Mexico; Atlanta; and Pittsfield, Massachusetts, to name a few. Along the way, he pitched in major, minor, independent, Mexican, and amateur leagues, wrote the groundbreaking best-seller Ball Four, starred in a short-lived TV adaptation of his book, jointly developed the baseball-themed gum product Big League Chew, and led an unsuccessful campaign to bring a professional team to one of America’s oldest minor-league ballparks.1

Bouton’s long and eventful life in professional baseball began in April 1959, when the pitcher from New Jersey and Illinois by way of Western Michigan University made his pro debut with the Auburn (New York) Yankees of the Class D New York-Pennsylvania League.2 The 20-year-old Bouton was hit hard in his first appearance and took the loss – perhaps a fitting start to a career that was marked by as many downs as ups.

The Yankees and Geneva (New York) Redlegs, a Cincinnati affiliate, kicked off the 125-game regular season with a home-and-home matchup. On Saturday, April 25, Auburn won a 16-7 slugfest at its home park, Falcon Park. The following day, the action moved roughly 28 miles west to Geneva’s Shuron Park for the Redlegs’ home opener.3 Geneva was aiming for a second straight championship. The Redlegs had beaten the Wellsville Braves in the 1958 playoffs after finishing a close second to Wellsville in the regular season.4

The Auburn and Geneva teams were led by veteran minor-league infielders who served as player-managers. Auburn skipper Bob Bauer hit .332 in 86 games as the team’s starting third baseman. It was the first of eight seasons Bauer would spend as a manager in the lower levels of the Yankees’ system. Reno DeBenedetti hit .303 for Geneva in 56 games, playing mostly at first and third base. It was his final season as a regular player, and also his only season as a professional manager.5 Neither man reached the major leagues as player, manager, or coach.

Besides Bouton, the Auburn team boasted only one other future major leaguer, pitcher Pete Mikkelsen. He did not appear in the team’s first two games. Geneva fielded two future big-leaguers that season, and one of them, Gus Gil, played shortstop and led off on April 26. By happenstance, Bouton and Gil were teammates a decade later on the expansion Seattle Pilots of the American League, the team Bouton chronicled in Ball Four. The other future Geneva big-leaguer, second baseman Cesar Tovar, did not play on April 26.

One other name on the Geneva roster might also be familiar to baseball fans, although he never reached the major leagues.6 Starting left fielder Martin Dihigo was the 16-year-old son of the Cuban-born Baseball Hall of Famer of the same name, who starred in multiple Latin American countries. The younger Dihigo played parts of four seasons in the Cincinnati farm system before returning to Cuba.7

Auburn gave the start on the mound to rookie right-hander Steve Evans, while Geneva tapped second-year righty Hank Maly. The 1959 campaign was Evans’s only recorded season of minor-league ball; he pitched four games for Geneva and one for the Kearney (Nebraska) team of the Nebraska State League. Maly pitched five seasons in the minor-league systems of the Reds and Minnesota Twins. In 1959 he went 11-9 with a 5.00 ERA in 30 games for Geneva. He walked 113 batters in 162 innings that season, placing him second in the league.

About 500 fans braved 40-degree chill8 to watch the two teams renew their offensive battles of the day before. Auburn jumped immediately to a 2-0 lead off Maly, who said later he was battling without success to keep the ball low: “Every time I tried to bring it up, it came up too high.” The Redlegs battled back in the bottom half, stretching one hit off Evans into four runs for a 4-2 lead. Two of the runs scored on a homer to right field by second baseman Don Biasotti – the game’s only four-bagger – while three walks and a wild pitch contributed to the others.9 Gil scored the first of the runs on the wild pitch.10

The see-saw kept swinging in the second inning. Auburn scored once, but Geneva responded with three runs to end the inning with a 7-3 lead. A triple by center fielder Harry Panaro was the biggest blow for Geneva, which again collected more runs than hits in the frame. Bauer yanked Evans after 1⅓ innings, during which the pitcher surrendered seven runs on three hits, walked four, and struck out none. Bouton replaced Bauer and pitched the rest of the game for Auburn. Unfortunately, available box scores do not include inherited runners scored, so it’s not clear whether Bouton allowed any of the runs charged to Evans.11

Auburn handed Bouton the first lead of his pro career in the third, racking up five runs to take an 8-7 lead. Bouton contributed to the rally with a double, an RBI, and a run scored. Maly took the pounding and was pulled after 2⅓ innings, having surrendered eight hits and eight runs, walked three and struck out one. He was replaced by Jack Erwin, a side-arming left-hander from Kentucky. Erwin stifled the Auburn rally and, like Bouton, carried his team the rest of the way.

Bouton and Erwin managed to calm the waters for an inning and a half, with neither team scoring. The game turned Geneva’s way in the bottom of the fifth, when the Redlegs mounted a four-run offensive with help from sloppy Auburn fielding.

Biasotti, the home-run hero, started the inning by reaching on an error by third baseman John McVey. Dihigo drew a walk. Catcher Wilfredo Ramirez grounded to manager Bauer, who replaced starting first baseman Joe Maggio in the second inning after Maggio pulled a leg muscle. Bauer misplayed the grounder, allowing Biasotti to score. Pitcher Erwin laced a triple to left-center field to drive in Dihigo and Ramirez, and Gil followed with a single to score Erwin for an 11-8 lead.12

Geneva tacked on an insurance run in the sixth, then fell silent for the final two frames. Erwin, meanwhile, kept the Yankees off the board throughout his 6⅔-inning relief stint, scattering five hits and four walks while striking out four. Bouton’s line was remarkably similar – 6⅔ innings, five hits, four walks – except that Auburn built its hits and walks into five runs, two of them earned. Bouton also threw two wild pitches and hit a batter, while Erwin hit one batter.

The game ended 12-8 in 2 hours and 55 minutes, with Erwin claiming the victory and Bouton saddled with the loss. It was the first of 20 wins Erwin collected in a three-season career, all spent in Class D. For Bouton, it was the first of 125 professional losses across a wide range of levels.13 Manager Bauer gave his young pitchers a vote of confidence after the game, telling reporters he was satisfied with Bouton’s performance and that Evans was a better pitcher than his outing showed.14

One other fielding play bears mentioning here, although the newspaper story that mentions it does not specify the inning in which it occurred. The Geneva Times reported that the best fielding play of the first two games belonged to Gil, who roamed behind second base to corral an apparent base hit by Bouton and throw out his future Seattle teammate.15

In seven games with Auburn, including four starts, Bouton went 1-4 with a 5.73 ERA. (An injury might not have helped his performance: A line drive off the bat of Erie’s Purnal Goldy hit him on the pitching hand during a May 28 start.)16 He then followed Evans to the Kearney, Nebraska, club, where play began in late June. He didn’t fare much better there: 2-4 with a 5.40 ERA in 15 games. Mitchell Nathanson’s biography of Bouton reported that the pitcher was shuttled between starting and relieving during his rookie year and never found a rhythm in either role. He also struggled to come to terms with “cultural realities” of baseball, such as being expected to throw at opposing batters.17

Bouton’s career gained steam the following season at Greensboro of the Class A Carolina League, where he went 14-8 with a 2.73 ERA in 28 games. Two seasons later, a good spring-training performance landed him the final spot on the pitching staff of a Yankees team that went on to win the World Series.18 In 1962 Jim Bouton became a well-known name across America for the first time – but certainly not the last.

In addition to the specific sources cited in the Notes, the author used the Baseball-Reference.com and Retrosheet.org websites for general player, team, and season data. Jim Bouton’s SABR biography, written by Mark Armour, also was a primary source for this story.

The author thanks FultonHistory.com for making the cited newspapers available online.

Image of 1963 Topps card #401 downloaded from the Trading Card Database.

2 Mitchell Nathanson’s biography of Bouton, based on extensive interviews with the pitcher, has him beginning the 1959 season at Kearney and finishing the year in Auburn. Nathanson, Bouton: The Life of a Baseball Original (Lincoln: University of Nebraska Press, 2020), 31. However, an Associated Press story picked up by multiple Nebraska news outlets in March 1959 reported that the Nebraska State League season didn’t start until June 28. Multiple news stories from Nebraska papers on June 29, 1959, confirm that the league began play the previous day. Meanwhile, news stories from New York make it clear that Bouton was part of the Auburn team at the start of the New York-Penn League season in late April, including “Auburn Yanks Face Geneva in Tomorrow’s Opener,” Auburn (New York) Citizen-Advertiser, April 24, 1959: 12.

4 Wellsville finished first with a 70-56 record; Geneva finished one game behind at 69-57. Geneva’s 1958 ballclub included infielder-manager Dave Bristol and infielder Chico Ruiz, neither of whom returned in 1959.

5 Bauer and DeBenedetti also made pitching appearances for their teams – one game for Bauer, five for DeBenedetti.

6 Another name on the Geneva roster, that of pitcher John Madden, might look familiar to sports fans as well. However, Geneva’s Madden was not the famous NFL coach and announcer of the same name.

16 “Sailors Sink Yanks, 14-9, Despite Three Home Runs,” Auburn Citizen-Advertiser, May 29, 1959: 9. Nathanson’s biography suggests that a broken hand suffered on a line drive ended Bouton’s rookie season in Auburn. However, as explained in Note 2, the biography incorrectly describes the chronology of Bouton’s rookie season. The line drive could not have ended Bouton’s season, as he pitched in Kearney after appearing in Auburn.

18 Bouton did not pitch in the 1962 postseason after making 36 appearances during the regular season.