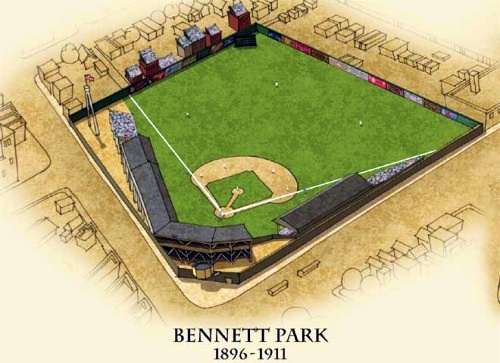 It’s been said that “beauty is in the eye of the beholder,” and to Detroit residents in April of 1896, the barely finished wood bleachers and uneven, soggy field of Bennett Park seemed beautiful. On Opening Day, when the Detroit franchise of the Western League (already informally called the Tigers, and already sporting an old English D on their blue-gray home uniforms1) beat the Columbus Senators 17-2, it seemed that Detroit baseball was on its way back.

Detroit had previously been a member of the National League, and as such had become used to being a “major-league city.” When the Detroit Wolverines won the 1887 postseason championship series against the American Association’s Browns of St. Louis, Detroiters were sure of their status in the baseball world.2 But the Wolverines folded the following season, and Detroit became a minor-league town, left without any meaningful professional baseball in the early 1890s. George Van Derbeck started a new Western League franchise in Detroit in 1894, playing for two years at Boulevard Park, an undistinguished, rickety,hastily-built wooden structure similar to most of that era.3

Van Derbeck’s club had succeeded in the last two years despite the skepticism of many, and by October of 1895, he had announced his intention to construct a new field in town for the Tigers.4 A new site was obtained on the northwest corner of Michigan Avenue and Trumbull Street, on the site of the former hay market.5 Van Derbeck boasted that the site was so close to downtown that he “couldn’t do much better unless Mayor Pingree would close up Woodward avenue and give us Grand Circus park.”6 The site was oddly-shaped, and because of this, home plate (still diamond-shaped in 1896) was in the southeast corner of the site, and the left-center-field fence was quite deep. The wooden stadium had a covered grandstand running from beyond third base around to about first base, with uncovered stands down the left- and right-field lines. It was partly constructed from wood from trees cut down to clear the site, though for some reason, several trees were allowed to remain standing, and in play.7

Construction of the stadium was significantly hampered by the weather; more than four weeks of construction time were lost, and the field was not in playable condition just a few days before the scheduled exhibition opener. Even so, 600 people came out to the unfinished site the day before the first scheduled exhibition, just to see the team practice.8 That first exhibition game — scheduled for April 12against the team from the University of Michigan — had to be canceled because additional rain had turned the field into a swamp.9 The park’s informal opening thus occurred on April 13, with a game against the Athletics, a local club, in a game won by Detroit, 30-3. A few other exhibitions followed, as warm-ups to the season.

Detroit then went on a five-game road trip to start the Western League season. The Tigers returned to Detroit for their April 28 home opener carrying a record of 3-2. Just the previous day, Detroit and Columbus had played a very tight game, filled with drama throughout, with Detroit emerging the victor, 8-7.10Facing the same team for the home opener, the Detroit partisans were thus expecting an interesting game against a tough opponent to inaugurate the new park.

Bennett Park had an official stated capacity of 5,000, making it one of the smaller parks in the Western League,11 but that capacity was certainly exceeded — perhaps by as much as 3,000 — on Opening Day of 1896, when eager spectators filled the stands, and then began to move into the field of play. The players on the bench were pushed into service to keep the spectators back, because the solitary police officer present was clearly insufficient to the task.12Indeed, in the first inning, Frank Butler, the regular left fielder for Columbus, went back to track a long fly ball and ran full-speed into a member of the grandstand crowd who had wandered onto the field. Butler was knocked out cold for close to 10 minutes, and had to leave the game. More officers arrived shortly thereafter to keep the crowd in check.13

With the stands full to overflowing, the crowd was eager for the contest to begin. But before there could be a ballgame, there were celebrations to attend to. Tigers owner Van Derbeck had arranged that earlier in the day, trolleys would carry the players of each team as well as several dignitaries through the streets of Detroit before finally delivering them to the field for the 3:30P.M.game. A cannon was fired “every few minutes to let the natives know it is a day to celebrate, even if it is not the Fourth of July.”14As game time approached, the two teams lined up on either side of home plate, and County Treasurer Alex McLeod, standing in for Detroit Mayor Hazen Pingree, strode to the mound, received the ball from the umpire, and spoke briefly. He then threw the first pitch to Detroit baseball legend Charlie Bennett, the much-admired catcher for the 1887 National League champion Detroit Wolverines, for whom Bennett Park was named.15 Bennett’s career had come to an unceremonious end in 1894 when a railroad accident led to the amputation of both his legs, though he remained well-regarded around the country.16With a roar of the crowd for Bennett, the ceremonies concluded, and the game could begin.

Unexpectedly, the game itself proved not to be very exciting, as Detroit took an early lead, and Detroit’s pitcher, Fifield, “was a mystery to the Senators, and only when he began lobbing them up, late in the game, did they do any team hitting”17 Nonetheless, “in spite of the one-sided game the people were yelling loudly all through and seemed as deeply interested when the last hit was made as when the guiding spirit of the team [player-manager George Stallings] infused life by cracking out a homer [the first in the new park] in the first inning.”18

Detroit went first to bat, and scored four runs in the first inning on a single by Parson Nicholson, a triple by Sam Dungan, a double by Lew Whistler, and the home run by player-manager Stallings (the play on which Butler of Columbus was knocked out). Columbus hoped to get back in the game when Thomas Campbell, their leadoff hitter, hit a single, but he was doubled off base on the next play when right fielder Joe Cantillon’s fly ball was caught, much to Campbell’s surprise. Cantillon, seeing the catch, bumped hard into Detroit first baseman Whistler to disrupt the play at first, but the umpire saw the tactic, and declared Campbell out in returning to the base due to Cantillon’s interference. After a walk to Peck Sharpe and an error on a fly ball by Detroit shortstop John Corcoran, Columbus first baseman Tom Morrissey lined out to Detroit’s third baseman, Sam Gillen, to end the first. Detroit scored three more in the second, then went silent until they put up eight runs in the sixth against Columbus twirler Bumpus Jones, and then two more in the seventh. Columbus scored one each in the seventh and the ninth. After 2 hours and 26 minutes, the first official game at Michigan and Trumbull was done.

There were criticisms, to be sure — the field was not yet in good shape (and, in fact, never really would be throughout the history of Bennett Park, with cobblestones from the earlier hay market occasionally pushing up through the infield).19Additionally, the Free Press noted that “there was enough kicking on both sides to cause the umpire to toss fines around like a drunken sailor his coin,”20and a separate column that same day stated, “Mr. Snyder [the umpire], you cannot enforce the ‘conduct’ rules too strictly.”21Some of that kicking may have been because Snyder had negated Detroit pitcher Jack Fifield’s second home run of the day when Snyder said he did not see the Columbus third baseman, Jim Collopy, blatantly interfered with Fifield as he rounded the base, allowing Fifield to be thrown out at home. But in general, the crowd went home happy (Columbus left fielder Butler being a likely exception).22

Detroit would go on to finish the 1896 season in third place, 10 games behind the Minneapolis Millers, with a record of 80-58.23 Popular player-manager George Stallings left Detroit at the end of the season to take over the National LeaguePhillies.24 As the 1896 season ended, owner Van Derbeck scheduled a September 24 exhibition doubleheader at Bennett Park against Cincinnati to raise money for the players, including a night game under electrified lights– the last Tigers night game in Detroit until 1948.25

But on April 28, 1896, all of that was in the future — as were over 100 more years of baseball to be played at “The Corner.” That day’s unexpected 17-2 win was an auspicious start to professional baseball at Michigan and Trumbull.

5 Richard Bak, Charlie Vincent, and the Free Press staff, The Corner: A Century of Memories at Michigan and Trumbull. (Chicago, Illinois: Triumph Books, 1999).