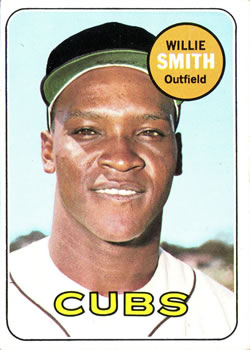 Ironically, the Chicago Cubs got off to an auspicious start in baseball’s centennial year. They began the 1969 season with the National League’s best Opening Day record: 39 wins, 28 losses, 2 ties. And there was plenty of optimism on Chicago’s North Side as the newly-configured major leagues got underway. George Vass wrote of the National League East Division, “The Cubs are young, hungry and ready. They’ll win this one.”1 In addition, two venerable sportswriters, Jerome Holtzman and Red Foley, also picked the Cubs to win the National League East. With the temperature in the mid-60s, 20,000 fans stood inside Wrigley Field two hours prior to game time shouting, “We’re number one” and “Go Cubs go.”2

Moments before the first pitch, a standing-room crowd of 40,796 watched captain Ron Santo present to a Cubs jacket to Hollywood icon Jimmy Durante. Standing at home plate with a microphone, Durante addressed the crowd: “Lots of luck to our wonderful Cubs and my old friend Leo Durocher.”3 Veteran Chicago Sun-Times baseball writer Edgar Munzel threw out the ceremonial first pitch.

Ferguson Jenkins, a 20-game winner the prior two years, started for the Cubs. Lefty Chris Short, a former 20-game winner who won 19 games in 1968, got the call for Bob Skinner’s Phillies.4 The visitors drew first blood. Larry Hisle led off the game with single, a shot off Santo’s glove. Ron Stone sacrificed him to second, and was safe at first when Jenkins bobbled the bunt. With one out, Deron Johnson’s line-drive base hit drove in Hisle. The lead didn’t last long. In the Cubs half of the first inning, Glenn Beckert singled with one out. Billy Williams walked on a 3-and-2 pitch. Santo hit into a force play. Williams slid in hard at second, preventing a potential double play. Chris Short ran the count to 2-and-2 on 38-year-old Ernie Banks. He got the next pitch down, but the Cubs first baseman, whose father, Eddie, watched from the stands, hit it for a three-run home run. “It was a helluva pitch,” Short recounted after the game.5

The Cubs struck again in the third inning, and again it was Banks who did the damage. Billy Williams reached on a single. After Santo grounded out, Banks gave the Cubs a 5-1 lead with his second home run in as many at-bats.6

The Phillies got one back in the seventh inning on Don Money’s leadoff homer, the ball barely clearing the catwalk railing inside the left-field foul pole. It was the first home run of his career. The score remained 5-2 going into the ninth inning. Jenkins was cruising. He’d allowed six hits, walked none, and struck out nine. Johnny Callison opened the frame with a single to left. Cookie Rojas followed with a bloop hit into short left-center field, just out of Williams’s reach. With two on and none out, Money tied the game with his second home run of the afternoon (and his career), a shot over the left-field bleachers, onto Waverly Avenue. Phil Regan relieved Jenkins and retired the next three batters.

“When Leo Durocher asked me about my stamina and mindset on the bench in the bottom of the eighth … I told him I was fine,” recalled Jenkins. “I guess I didn’t feel that great.”7

Phillies reliever Barry Lersch retired the Cubs one-two-three in the bottom of the ninth inning. Lersch had come to relieve Bill Wilson in the seventh inning. Wilson had worked two scoreless innings in relief of Short. Both Regan and Lersch retired their opponents in order in the 10th inning.

As he did in the top of the ninth inning, Callison led off the 11th with a single. Rojas sacrificed him to second. That brought up Money. “[Coach] George Myatt told me Regan would be throwing me sliders away. He told me to take him to right field,” recalled the Phillies shortstop.8 Money swung and missed an outside slider, then fouled off the same pitch. With two strikes, he managed to loop one into right field for a double, scoring Callison with the go-ahead run. It was Money’s fifth RBI of the game.

“We had no book on Money,” Durocher said after the game. “We just heard he’s a fine young player. Phil [Regan] saw him before. If that’s the way he’s going to play up here I hope that’s the last I see of him too.”9

Money’s success didn’t come as a surprise to the Baseball Digestscouts, who wrote in 1969, “No doubt that this is his season. One of the better players to come along in some time.”10

With the Cubs trailing by a run in the bottom of the 11th inning, Ernie Banks, who like Money had five RBIs in the game, lined out to Callison in right. Randy Hundley lined a 2-and-2 pitch to left for a single. Jim Hickman was the scheduled batter. Durocher looked to his bench for a left-handed hitter to face the righty Lersch. He had Al Spangler and Willie Smith available. Smith figured it would be Spangler. “Al was an established pinch-hitter, more known than I was,” he recalled in a 1994 radio interview.11 “I think [Durocher] was saying ‘eeny, meeny, miny, mo.’”12 But, Durocher remembered it differently.

“I had my choice between Smith and Spangler,” Durocher said. “I had some thoughts that Willie, who’s not too fast, might ground into a double play. This danger would be lessened with Spangler up. But he doesn’t have Willie’s power.”13

With the tying run on first, Smith, whose nickname was “Wonderful,” took his warmup swings and hurt his side. He had difficulty standing straight and was in pain as he stepped to the plate. But he hit a 1-and-0 pitch into the right-field bleachers, giving the Cubs a walk-off 7-6 extra-inning come-from-behind Opening Day victory. Smith was mobbed by teammates and fans at home plate.

“I wasn’t tired,” Lersch said after the game. “It was just a bad pitch … a fastball, up and away. They said he was a pull hitter. I tried to keep him from pulling.”14

The Cubs went on to win 11 of their first 12 games. They didn’t relinquish first place until September 10. “The Cubs will shine in ’69,” Ernie Banks, who received four standing ovations on Opening Day,15 proclaimed before the season. He might not have been right, but Mr. Cub’s words were prophetic on this “Wonderful” Wrigley Field Opening Day.

4 Chris Short made only one other appearance in 1969, on April 15 against the New York Mets. Because of a back injury that required surgery, he pitched only 10 innings all year.

6 It was the 476th home run of Banks’s career. It put him ahead of Stan Musialand into 10th place on the all-time home-run list.

15 The first when he trotted out to the third-base line during pregame introductions. The second after his three-run home run in the first inning. The third ovation when he took the field in the second inning, and the fourth before he stepped into the batter’s box in the third inning.