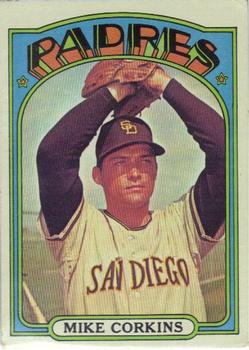 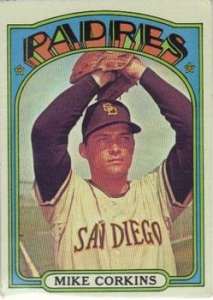 Mike Corkins is one of many ballplayers with reason to dislike Jim Bouton’s Ball Four — not because it captured his personal indiscretions, but because it chronicled his professional failings. In his entry for September 8, 1969, Bouton summarized Corkins’ unfortunate major-league debut for San Diego against Houston, in which the rookie yielded two triples and a run-scoring wild pitch on his first three pitches. “We beat San Diego 9-2 tonight and I felt sort of sorry for Mike Corkins, their starting pitcher,” Bouton wrote.1

Any time an athlete’s low moment attains posterity, it’s worth remembering that they must have celebrated high points, too. Unfortunately, Bouton wasn’t present to capture the moment on August 12, 1969, four weeks before the game referenced in Ball Four, when Corkins pitched a dominant no-hitter and struck out 16 batters for the Elmira Pioneers in Double-A Eastern League competition.

Corkins pitched his masterpiece in front of 1,506 fans at Dunn Field in Elmira, New York, many of them drawn to the ballpark by a major local employer’s promotional night.2 The 23-year-old right-hander was in his fifth professional season and his first in the employ of the San Diego Padres, who selected him from the San Francisco Giants in the 1968 expansion draft. Control posed Corkins’ biggest challenge at every stop, as he walked more than 100 hitters in both the 1965 and 1967 seasons. He improved somewhat in 1969, walking 81 batters — still sixth-most in the Eastern League.3 His 125 strikeouts for the season ranked fifth in the league, and he placed among the loop’s top three pitchers in strikeouts per nine innings, with 8.9.4

Twelve members of manager Harry Bright’s Pioneers appeared in the major leagues at some point, and seven of them started on August 12.5 In addition to Corkins, Rafael Robles led off and played shortstop, Jim Williams hit third and played right field, Jerry Morales hit fifth and played center field, Fred Kendall caught and hit sixth, Ron Slocum played third base and hit seventh, and Dave Robinson hit eighth and played left field. The Pioneers’ ninth-place hitter, designated hitter Jeff Pentland, never made the bigs as a player but later spent 16 years as a major-league hitting coach. The Pioneers came into the game with a 57-57 record, good for third place, 10 games behind the league-leading York Pirates.6

Manager Jerry Walker’s Manchester (New Hampshire) Yankees occupied the visitors’ dugout. Only three members of the team reached the major leagues, and two played that night — shortstop and second-place hitter Jim Kennedy, and left fielder and third-place hitter Ron Blomberg.7 Some of the team’s most potent offensive weapons never made the bigs. Right fielder Fred Winston placed second in the league with 41 stolen bases for the full season, while third baseman Ed Gagle led the league in home runs as of August 12.8

The junior Yankees were the league’s most powerful team, ending the season with 127 homers — 29 more than second-place Reading, and 60 more than Elmira. But the team’s pitching couldn’t keep pace, posting the league’s second-worst ERA, second-most hits surrendered, and fewest strikeouts. Manchester entered the game fifth in the six-team league with a record of 50-64, 20 games out of first.

Walker gave the pitching nod to 20-year-old righty Walter Walters, an Arizonan in his third professional season and his first at Double-A. For the full season, Walters went 5-13 with a 3.51 ERA in 27 games split between the Class A and Double-A levels.9

Elmira nicked Walters for a run in the first inning. Robles led off with a double, and two batters later, first baseman Albert Thompson brought him home with a double to left-center field. Corkins established his mix of pitches early, keeping the Yankees off-balance by effectively mixing his fastball with breaking balls.10

Manchester threatened to tie the game in the third. Second baseman Jerry Schultz reached on an error by Elmira second baseman Chuck Cone. Corkins’s pickoff attempt got past Thompson, allowing Schultz to scoot all the way to third. But the pitcher bore down and retired the next three Yankees hitters — center fielder Roger Dutton, catcher Steven Grotemeyer, and right fielder Winston — two of them on strikeouts. The Yankees threatened again in the fifth as first baseman Gary Washington walked, stole second, and advanced to third base on a fly to right field. With a runner on first, the Yankees attempted a double steal. Washington was thrown out trying to score, ending the rally.11

As the Yankees struggled to score, Elmira used small ball to put a second run on the board in the seventh. Left fielder Robinson singled and stole second, and Robles singled him in for a 2-0 Pioneers lead. Walters deserved a better outcome: He worked a complete eight innings, and outside of the two run-scoring rallies, he surrendered only two additional hits and walked three. On many nights, his effort would have been good enough to win.12

Unfortunately for Walters, Corkins’ fastball and effective use of off-speed pitches had Manchester hitters overmatched. And even when they put runners on base, they couldn’t get them across home plate. They mounted one last rally in the ninth. After Winston led off with a strikeout, shortstop Kennedy drew Corkins’ fourth and final walk. He moved to second on a passed ball by Kendall and took third on a fly ball to right by Blomberg. With two out, power-hitting Gagle — three times a strikeout victim — represented the tying run and Manchester’s last hope. Corkins whiffed him again on a rising fastball for his 16th strikeout of the game, wrapping up his no-no in 2 hours and 7 minutes.13

Corkins blanked the powerful Yankees “without the semblance of a hit,” The Sporting News reported. His no-hitter was the 14th in Elmira’s professional baseball history. Manager Bright called it “a superb job,” while Corkins admitted to being jittery in the ninth inning.14

The Elmira newspaper’s game story included the erroneous claim — later reprinted by The Sporting News — that Corkins’ no-hitter was the first thrown by a pitcher in the Padres’ organization.15 But NoNoHitters.com, a no-hitter research website run by SABR member Dirk Lammers, later unearthed two no-hitters from earlier that summer by Padres farmhands playing for the Rookie-level Salt Lake City Bees. Richard Zinniger threw a 3-1 no-hitter against the Great Falls Giants on July 31, 1969, and teammate John Preston threw a 7-0 no-no against the Idaho Falls Angels on August 7.16 The Pioneers were a co-op team jointly affiliated with the Padres and Kansas City Royals, creating some ambiguity as to whether Corkins’ game should count as a “Padres organization” no-hitter. Even if it does, though, it was not the first no-hit game by a Padres minor-leaguer.

Corkins continued to pitch strongly for Elmira. On September 2, he and Dukes combined on a five-hit shutout to beat Reading in the scheduled first game of a best-of-three semifinal playoff series. When the Eastern League canceled the remainder of its playoffs, Corkins got his first call to the major leagues.17

Six days later, he made his star-crossed big-league debut against the Astros, giving up six hits and five runs in 1⅔ innings to take the loss. He enjoyed a measure of revenge against Houston on September 15, going five-plus innings for his first major-league win. A week after that, Corkins’ eventful season continued as he surrendered Willie Mays’ 600th big-league homer in a 4-2 loss to San Francisco. All told, he appeared in six games for San Diego that year and compiled a record of 1-3 and an 8.47 ERA, kicking off a six-season major-league pitching career.

As the article notes, newspaper coverage of this game erroneously credited Corkins with the first no-hitter by a pitcher in the Padres’ organization. The author thanks SABR members Evan Katz and Dirk Lammers for providing information on the no-hitters by Richard Zinniger and John Preston of the Salt Lake City Bees, both of which occurred less than two weeks before Corkins’ gem. The author also thanks the Games Project’s John Fredland and Bruce Slutsky for their assistance.

Neither Baseball-Reference nor Retrosheet provides box scores of minor league games, but the August 13, 1969, edition of the Elmira (New York) Star-Gazette published a box score.

Image of 1972 Topps card #608 downloaded from the Trading Card Database.

2 Westinghouse Night, to be specific.

3 Future big-leaguer Ken Reynolds, then pitching for the Reading Phillies, led the Eastern League in both walks (110) and strikeouts (180), working 192 innings.

5 Pioneers players who appeared in the big leagues but did not play in this game were Tom Dukes, Rick James, Skip Lockwood, Dave Roberts, and manager Bright, who appeared in two games at age 39.

7 The Manchester player who reached the big leagues but did not play in this game was Charlie Sands.

8 Gagle ended the season with 23 homers and 80 RBIs, both good for fourth place in the league. He played five pro seasons, peaking at Double-A.