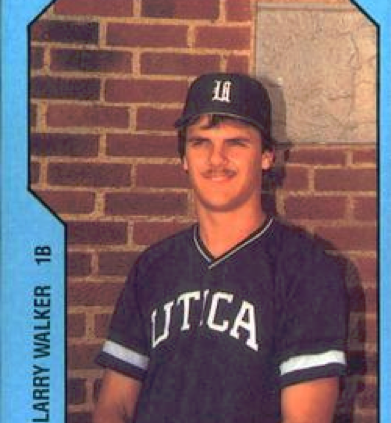 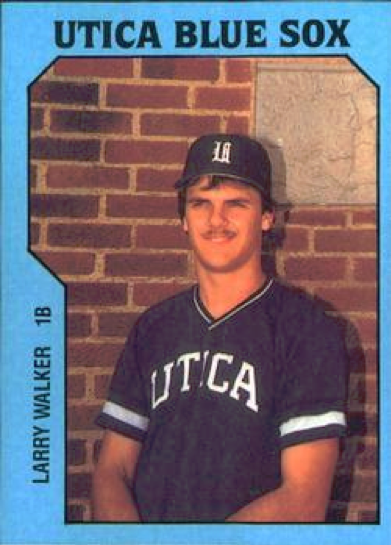 Hall of Fame talent sometimes takes time to develop. Consider the case of Larry Walker: Before he was a homer-mashing offensive force with the Montreal Expos, Colorado Rockies, and St. Louis Cardinals, he was an 18-year-old rookie who hit .223 in 62 games with the 1985 Utica Blue Sox of the short-season Class A New York-Penn League.

Walker arrived in Utica with raw talent, but lacking experience and plate discipline. “I’d never seen a forkball, never seen a slider. I didn’t know they existed,” he explained later. “I had never really seen a good curveball. In Canada, as a kid, we’d play 10 baseball games a year. Fifteen, tops. Some pitchers had a thing they’d call a spinner, but nothing like this.”1

As Walker learned his craft in his first professional season, he had one of his better games on August 12, 1985, driving in one run and scoring two as Utica knocked off the Auburn (New York) Astros, 4-1, in front of 538 fans at Auburn’s Falcon Park. A modest start, perhaps, but even a Hall of Fame career has to begin somewhere.

Auburn, a Houston Astros farm team, entered the day tied with the Geneva Cubs for first place in the league’s McNamara Division, with a 34-21 record. Utica, an independent team, was running a distant second in the league’s Yawkey Division, 10 games behind the Oneonta Yankees, with a 27-28 record.2

Auburn’s manager was Bob Hartsfield, a former minor-league infielder and brother of major-league player and manager Roy Hartsfield. Bob Hartsfield was then in his ninth and last year managing in the New York-Penn League. As a scout, he was later credited with signing Deion Sanders for the New York Yankees.3

Utica’s manager was well-traveled former big-league pitcher Ken Brett, in his only season as a minor-league skipper. Brett had broken into professional baseball in the New York-Penn League as a 17-year-old pitcher with the 1966 Oneonta Red Sox. Brett landed with the Blue Sox through an indirect and colorful route. He’d referred jestingly to the city of Utica in a beer commercial spoofing his itinerant big-league career. Some in Utica took offense to the name-drop, so Brett came to town for a peacemaking visit. He impressed the team’s co-owners so much that they hired him as manager.4

Five members of the Auburn team reached the major leagues, though none achieved great success. Two of them started on August 12, John Fishel in center field and Dan Walters behind the plate.5 Another force in the Astros lineup was second baseman Wayne Rogalski, who tied for the league lead in doubles with 20. The team’s starting pitcher was 21-year-old Don Dunster, a second-year righty who went 5-5 with a 3.61 ERA for Auburn that season. He played parts of six seasons in the minors, topping out with four games at Triple A in 1989.

Three members of the Blue Sox eventually reached the major leagues, and all three started on August 12. Seventeen-year-old Esteban Beltre, who hit .199 that season, led off and played shortstop. Walker hit third and played first base, and Sergio Valdez got the start on the mound. Valdez, who ranked among the league leaders in games started and innings pitched, compiled a 6-5 record and a 3.07 ERA in 15 games that season. He later pitched parts of eight big-league seasons between 1986 and 1995.

The Blue Sox claimed a 1-0 lead in the first inning, with Walker driving in the run. Center fielder Ramon Noble singled, stole second, and advanced to third on a wayward throw by Auburn catcher Walters. Walker drove him in with an infield grounder. Auburn threatened to get the run back with two outs in the bottom half, as first baseman Richard Johnson and designated hitter Curtis Dishman hit consecutive singles. But Utica right fielder Steve St. Claire ended the inning by throwing out Johnson as he tried to take third on Dishman’s hit. St. Claire, who hit .180 that season, didn’t make the majors — though his father, Ebba, and his brother, Randy, did.6

Third baseman Al Hibbs was another Blue Sox player who had trouble with the bat in 1985, hitting just .185 in 42 games. (The entire Utica team hit just .214, well below the league average of .235. Auburn’s .250 team average was the third-best mark in the league.) Still, Hibbs gave Utica a 2-0 lead in the fourth when he bounced a fly ball off, and then over, the top of the left-field fence. It was the third of four homers he hit that season, and it accounted for the only Utica run of the night in which Walker was not involved.7

In the sixth, Walker singled off Dunster, took second on a wild pitch, and scored on a single by catcher Roger Dean. And in the eighth, Walker struck again ̶ he doubled down the right-field line and came home on St. Claire’s single for a 4-1 Utica lead. The Astros had scored their only run an inning before, on a solo home run to left field by Rogalski.8

The Astros threatened with two outs in the ninth, as Fishel singled and Rogalski reached on an error by Beltre, but Valdez struck out pinch-hitter Gus Edwards to wrap up the game in 2 hours and 12 minutes. Valdez allowed only five hits, four of them singles, and struck out 10.9 Afterward, Valdez said all of his pitches were working well, noting that he was motivated by Auburn’s victories in three previous games against Utica: “Auburn is one of the stronger teams in the league, and because of that, I wanted to beat them,” he explained. Hartsfield praised Valdez’s pitching, while noting that the Astros were handicapped by the absence of regular center fielder Cameron Drew, out of the lineup because of an infected boil.10

With hard work, coaching, and focus, Walker’s career began to catch fire the following season. After hitting just two home runs with Utica, he hit 33 between two Class A stops, Burlington and West Palm Beach, in 1986. Twenty-six more homers followed at Double-A Jacksonville in 1987. He lost all of 1988 to a knee injury but came back strong. By mid-August 1989, at the age of 22, he had reached the major leagues, collecting a single, three walks, and two runs scored in an Expos win against San Francisco in his debut game. The career that made him a Canadian national hero and landed him in the Hall of Fame had begun.

Neither Baseball-Reference nor Retrosheet provides box scores of minor-league games, but the August 13, 1985, edition of the Auburn (New York) Citizen published a box score.

The author thanks FultonHistory.com for making many of the cited newspapers accessible online.

Image of card #16 from the 1985 TCMA Utica Blue Sox set downloaded from the Trading Card Database.

4 United Press International, “View from the Front: Ken Brett Is Getting an Education as Rookie Manager of the Utica Blue Sox,” Los Angeles Times, July 7, 1985, accessed online May 10, 2021.

5 Other Auburn players who reached the majors but did not appear on August 12 were Cameron Drew, Blaise Ilsley, and Terry Wells. After his baseball career ended, catcher Walters became a San Diego police officer. He was left paralyzed by a 2003 incident in which he was shot twice in the neck and run over by a car. He died in 2020 from related injuries. See John Maffei, “Dan Walters, Former Padre and San Diego Police Officer, Dies at 53,” San Diego Union-Tribune, April 23, 2020, accessed online May 10, 2021.