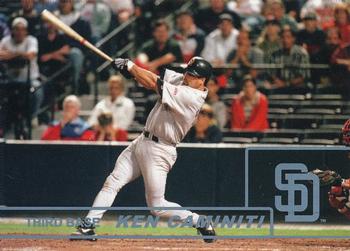 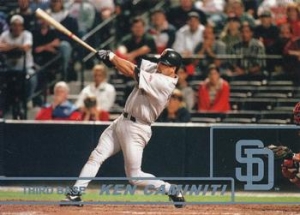 The third and final game between the San Diego Padres and New York Mets, the first regularly scheduled major-league games played in Mexico, took place under a broiling 100-degree sun. The finale drew another 22,810 enthusiastic fans who again heartily greeted players from both teams as they took the field.1 As in the first two games,2 a roving mariachi band entertained before the game and between innings. However, by Sunday the impact of the adventure had begun to affect players. After two comfortable night games, the dry, desert-afternoon heat immediately took a toll. Meanwhile, several players had fallen victim to food poisoning. A few other players had also begun grumbling about the Estadio Monterrey playing field. Conditions that had been tolerable two days earlier had, by Sunday, become a point of concern.

The game began well for both pitchers. Joey Hamilton put the Mets down in order, the first two by strikeouts. In the bottom of the inning, Rickey Henderson, who was playing left field, led off for the Padres. Henderson had not started in the first two games. When he came to the plate for the first time, he received a roaring salute. After the game he conceded that he probably had more fans in Monterrey than anywhere in the National League – including San Diego.3 Mets hurler Paul Wilson got both Henderson and Tony Gwynn to ground out. The inning ended on a Steve Finley fly out to left.

In the second inning Hamilton chalked up his third strikeout but also gave up two-out singles to catcher Brent Mayne and second baseman Edgardo Alfonzo. Fortunately for Hamilton, Rey Ordonez, the Mets shortstop, grounded out to third before any runs could score.

The Padres’ second inning opened with some fireworks. Leadoff hitter Ken Caminiti blasted Wilson’s fourth pitch into the left-center-field stands for a home run. A Gold Glove winner the previous year, Caminiti was recognized as one of the best fielding third basemen in baseball. At the plate he was having a career season that would culminate in a Silver Slugger Award as well as the league’s Most Valuable Player Award. Caminiti was also one of the Padres players suffering from the effects of the team’s foray into Mexico. He had spent the previous night vomiting and the morning getting intravenous medication to counter food poisoning and dehydration.4 That he was able to play was a testament to his fortitude.

Caminiti came to the plate again in the third inning, this time with Henderson on second, pitcher Hamilton on third, and two outs. As he had an inning earlier, the Padres third baseman smacked a Wilson pitch for another home run. This one went into the right-center-field stands. Amid a standing ovation from appreciative fans, Caminiti slowly loped around the bases and back into the Padres dugout.5 His day ended two innings later when second baseman Craig Shipley moved to third and Jody Reed took Shipley’s place at second base. Shipley, who hailed from New South Wales, Australia, had the distinction of being the first Australian to play major-league baseball during the modern era.

Despite a bases-loaded threat in the fourth, Hamilton continued to rack up strikeouts and keep the Mets off the scoreboard through the middle innings. When he left in the eighth he had struck out 10 Mets batters and given up only six hits. For Wilson it was a different story. In the fourth he gave up another home run, this one to Hamilton. The Padres scored again in the fifth on doubles by center fielder Steve Finley and first baseman Wally Joyner. Then, in the seventh, Wilson was finally lifted for a pinch-hitter. After the game he lamented, “Sometimes I don’t have it. I can’t say I’m pitching the way I was in spring training. Physically and mentally, I’m different now. … I’m just not getting the job done.”6 Mets manager Dallas Green was a bit more philosophical about his rookie pitcher’s performance: “With young people they don’t learn too much when you take them out of the game.”7

The Padres scored their eighth and final run in the eighth. Meanwhile, Dario Veras picked up where Hamilton had left off. After Lance Johnson singled leading off the fifth inning, the Mets failed to put another runner on base until the ninth, when Trevor Hoffman, the Padres closer, gave up a walk and a single. The 8-0 win pushed the Padres into a tie with the Dodgers for first place in the National League West while the Mets slid nine games beneath .500.

Many involved in the three-day series considered it a grand success. Padres CEO Larry Lucchino was at the top of that list. It had been his idea and organizing that had brought major-league baseball to Monterrey. The previous winter he had learned that the Republican Party was considering holding its presidential nominating convention in San Diego and might use Jack Murphy Stadium. Already focused on developing a Latino fan base, Lucchino decided to schedule games in Mexico while the GOP was in San Diego. His goal, as stated by the Padres director for Hispanic marketing, was simple: “We want to become Mexico’s team.”8

There were several players who shared Lucchino’s aspiration. The most outspoken was Carlos Baerga, a native of Puerto Rico. Baerga commented, “I was ready to come here. … Baseball needs to be Spanish. We’re idols in Latin America. A lot of these kids can’t come to the States to watch us play.”9 He told the Rockland Journal News: “It has been good, it has been good for baseball.”10 During their visit, Baerga, two other players, and four coaches gave instruction to 200 local children on a field across the street from the ballpark. Tony Gwynn liked the relative anonymity he experienced in Monterrey: “Once we left the hotel today, nobody said, ‘Mr. Gwynn can I have your autograph?’ in English or in Spanish.”11 Mets pitcher John Franco observed, “It’s a lot nicer than I would have thought from what everybody said.”12

Of course, there were a few players who had a different opinion about their experience in Monterrey. In addition to Caminiti, at least three Mets, catcher Todd Hundley, second baseman Edgardo Alfonzo, and outfielder Chris Jones, complained about stomach problems. Hundley was blunt about playing in Mexico again: “You can have this place. It ain’t worth coming here.”13 Teammate Bernie Gilkey grumbled, “They better call me because I’m not coming. Dangerous man. I’m glad nobody got hurt.”14 Center fielder Lance Johnson agreed. “These are probably the hardest conditions I’ve played in in years. You couldn’t even charge a ground ball. … One ball that went by Wally (Joyner) he didn’t even see.”15 The language barrier was also a problem for some players. However, manager Green summed up the general attitude: “I don’t speak Spanish, so I don’t know what the hell they’re calling us. But they’re fine. They like their baseball and they know this game.”16

Despite the complaints, Lucchino returned home satisfied. Attendance for the three days averaged 22,461, a bit more than either the Padres or Mets were drawing at home.17 Assessing the three-day experiment, the Padres CEO contentedly remarked, “I feel like the Padres flag is pretty firmly planted in Monterrey soil and we’ll have to come back and tend to it.”18

10 Stier. The other player was Mets third baseman Alvaro Espinosa. The Mets coaches were Rafael Landestoy and Frank Howard. The Padres coaches were Davey Lopes, Merv Rettenmund, and Rob Picciolo. The coaches did the instruction and the players talked to children. Baerga advised the kids to stay in school, telling them, “[I]f you stay in school and get a degree you’ll always be able to get a job.”

18 Stier. In 1999 the Padres returned to Monterrey to open their season with a game against the Colorado Rockies. They made a third trip to Monterrey in May 2018, playing a three-game series against the Los Angeles Dodgers. The Rockies won the 1999 game, 8-2. The Dodgers won the May 4, 2018, game, shutting out the Padres, 4-0, but San Diego prevailed in the next two games, beating the Dodgers 7-4 on May 5 and shutting out LA, 3-0, on May 6.