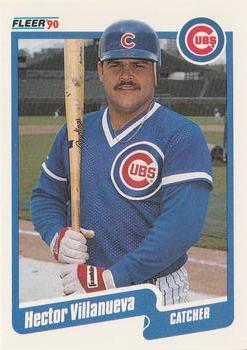 The Cubs called up Puerto Rico native Hector Villanueva on June 1, 1990, midway through his sixth minor-league season. The heavyset 25-year-old catcher burst onto the big-league scene with a homer in his first game and three in his first six. He quickly became a Wrigley Field fan favorite, batting .272 in 114 at-bats with 7 homers and 18 RBIs in 52 games. The final home run was a dramatic pinch-hit homer that beat the Atlanta Braves on August 19.1

A crowd of 33,284 filled Wrigley Field to watch the Cubs limping to the end of a disappointing season. After winning the 1989 NL East title, they were now tied for fourth place with a mark of 57-62, 13 games behind the first-place Pirates. The Braves were last in the NL West with a 45-74 record, 23½ games behind the division-leading Reds. But good times were on the way in Atlanta — the following season the Braves won the first of 14 division titles in the next 15 years.

The Cubs had been playing well the past month, winning 21 of 30 games. The Braves were moving in the opposite direction; they were 6-19 in their last 25 games. But the previous day they had evened the three-game series against the Cubs at one game each. Led by Mark Lemke’s five hits, Atlanta hammered out 24 hits against five Cubs pitchers in a 17-6 victory. It was the most runs the Braves scored in a game during the 1990 season.

The Cubs’ starting pitcher was Greg Maddux. The 24-year-old future Hall of Famer was 10-10 for the season with a 3.55 ERA. After struggling in May and June, Maddux was 6-1 with a 1.28 ERA in his last seven starts. Braves manager Bobby Cox started 20-year-old rookie left-hander Steve Avery. Since his major-league debut on June 13, he was 2-7 with a 5.37 ERA. Three seasons later, Maddux joined the Braves and the duo led Atlanta to 104 wins in their first year as teammates.

Three batters into the game, the Braves took the lead. Lonnie Smith and Jeff Treadway singled and Ron Gant’s fly to Andre Dawson in right field produced a run.

The Cubs tied the score in the bottom of the inning. Doug Dascenzo doubled on a grounder just inside the third-base bag. On a hit-and-run, he went to third on Ryne Sandberg’s groundout to shortstop.

Mark Grace entered the game on a hot streak, batting .395 (51-for-129) in 33 games since the All-Star break. His grounder off Avery’s glove resulted in an infield single. Dascenzo scored on the play to tie the game.

The Braves plated two unearned runs in the second to take a 3-1 lead. Maddux allowed singles to the first two batters, Jim Presley and Ernie Whitt. Andres Thomas grounded a potential double-play ball to shortstop, but Shawon Dunston’s throw to second was wild. Presley scored, and Whitt ended up on third and Thomas on second. After Avery struck out, Smith lofted a sacrifice fly to center to score Whitt. Treadway picked up an infield single on a slow roller to third to put runners on the corners, but Maddux got Gant to line out to second to end the inning.

The game then turned into a pitchers’ duel. From the third inning through the seventh, Maddux faced the minimum. He gave up singles to Tommy Gregg in the third and Treadway in the fifth, but both were erased on double plays. Whitt led off the seventh with a single but was caught stealing when Thomas was unable to make contact on a hit-and-run.

Avery was sharp as well. In the second inning he surrendered a leadoff single to Domingo Ramos, who was erased in a 5-4-3 double play off the bat of Joe Girardi. In the third, Chicago cut the lead to 3-2 when Dascenzo led off with a walk and scored on a one-out double to center by Grace.

Avery retired the Cubs in order in the fourth and fifth innings. In the sixth Grace led off with a single — his seventh consecutive hit over three games — and stole second base. He went to third on a wild pitch with two outs but was stranded.

Avery had thrown 92 pitches — with a career-high seven strikeouts — when Oddibe McDowell pinch-hit for him in the seventh. “We thought Avery maxed out in the sixth,” explained Braves pitching coach Leo Mazzone after the game.2

Avery understood, saying later, “I can see they were trying to help my confidence. [Cox] is trying to keep me out of situations where I could lose the ballgame.”3

Jeff Parrett4 pitched the seventh for Atlanta and gave up consecutive singles to pinch-hitter Dave Clark and Joe Girardi. They moved up to second and third on Maddux’s sacrifice.

Dascenzo lifted a foul pop fly down the first-base line near the Cubs bullpen. Rather than let the ball drop, Braves second baseman Treadway made a diving catch with his back to the infield, avoiding a collision with first baseman Gregg, who had made a sliding attempt for the ball. Clark tagged from third. Treadway rolled over, sprang to his feet, and fired to the plate. But Clark scored on a close play to tie the game, 3-3.

Cubs manager Don Zimmer agreed it was the right play by Treadway, “because they were playing their infield back, conceding us the tying run anyway.”5

He added later, “It was one of the greatest plays I have ever seen. Then he got up and made a great throw that almost got the man at the plate.”6

The Braves retook the lead in the eighth. Treadway singled — his fourth of the game — with one out and went to second on a two-out single by David Justice. Gregg’s single to left gave the Braves a 4-3 lead.

The Braves turned to rookie left-hander Kent Mercker to protect the lead in the eighth. With one out, Luis Salazar singled to center. Dunston followed with a grounder to Thomas at shortstop but hustled down the line and beat the relay throw to first to prevent an inning-ending double play.

“It was the perfect double-play ball, and we were out of the game if Dunston didn’t hustle that way,” remarked Zimmer after the game.

Pinch-hitting for Clark, Villanueva saw four straight fastballs from Mercker before slugging the fifth one for a homer into the stands in left to give the Cubs a 5-4 lead.7

Villanueva said later that he was familiar with Mercker: “I wasn’t surprised to see five fastballs. I know he’s a power pitcher. I faced him in Triple A. I hate to tell you, but he struck me out three times the first time in Triple A.”8

The moment was especially meaningful for Villanueva because of who was in the stands; his parents had been visiting from San Juan for three weeks and were leaving the next day to return home.9

“There was a lot of emotion,” he admitted. “I’m glad my parents got to see me hit one. I knew where they were sitting, so I looked to my wife and parents when I ran the bases.”10

When called on to hit, Villanueva had been in the bullpen warming up reliever Paul Assenmacher. After giving the Cubs the lead, he jogged back to the bullpen to warm up Mitch Williams, receiving a standing ovation as he went.11

“That’s my job,” he said later. “I got Assenmacher ready. I pinch-hit. Then I went back there to catch Mitch, just in case.”

Assenmacher set the Braves down in order in the ninth for the save, striking out Thomas and pinch-hitter Francisco Cabrera for the final two outs.

The win went to Maddux, who allowed 11 singles but no walks while striking out four. He threw just 32 called balls out of 98 pitches in his eight innings of work.

Avery was pleased with his start, saying, “I pitched ahead a lot today. I thought it went a lot better. I just wish I could have gotten the win.”12

After his dramatic homer, Villanueva batted just 19 more times in 1990, collecting three hits with no homers or RBIs.

But he had more dramatic moments at Wrigley Field. In 1991 he had a two-homer game in a Cubs victory over the Astros on May 1 and a pinch-hit RBI triple during a three-run ninth-inning rally by the Cubs against the Padres on August 23. In a start on April 12, 1992, he belted a three-run homer in the seventh to beat the Cardinals, 4-2.

Despite being a cult hero to Cubs fans, Villanueva was released following the 1992 season after he hit just .152 in 112 at-bats. He signed with the Cardinals for 1993 and homered three times13 in 55 at-bats before his major-league career ended in June.

Villanueva played professionally until 2001, spending time in Triple A, independent leagues, the Mexican League, and the Chinese Professional Baseball League before ending his professional baseball career.

The author attended this game with his girlfriend — now his wife; he proposed 13 days after the game — and her brother and sister during a trip to Iowa to see her family, shortly before beginning his final semester at the University of Arkansas. After the game, while the rest of his party was in the McDonald’s across the street from Wrigley Field, he hung out near the Cubs parking lot. When Ryne Sandberg — his favorite player of all time — appeared at the fence, the author secured an autograph on the bill of his Cubs hat. The hat sits prominently on a shelf in his baseball room today. 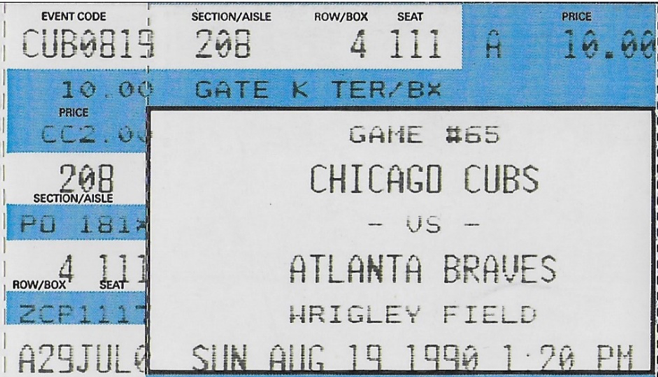 The author also consulted a WGN recording of the broadcast of the game that he has on compact disc.

4 Parrett was acquired in the August 3, 1990, trade that sent longtime Braves star Dale Murphy to the Philadelphia Phillies.

7 Highlights of the game, including Villanueva’s home run, can be seen here starting at the 6:07 mark: https://www.youtube.com/watch?v=uH1mnfWG-Y4.

11 The author remembers this scene well because his party was sitting a few rows above the Cubs dugout. They were part of the standing ovation.