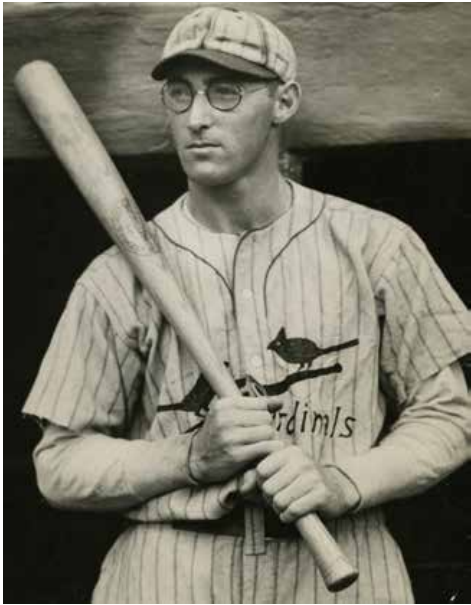 On this steamy August afternoon, the bespectacled outfielder Chick Hafey etched his name into the St. Louis record books and helped launch his team on a historic run to the National League pennant. As the Cardinals pounded out 19 hits in beating the Philadelphia Phillies, 16-6, in the first game of a five-game series, Hafey became the first Cardinals player to hit for the cycle in Sportsman’s Park. It wasn’t much of a contest; the Phillies’ six runs didn’t come until they had fallen behind by 13.

Entering the contest, the Cardinals were in fourth place with a record of 62-56, while the visiting Phillies were in the cellar with a mark of 40-78, already 31 games behind the National League-leading Chicago Cubs. J. Roy Stockton of the St. Louis Post-Dispatch wrote, “Despite the general belief that the fans are especially fond of slugging only about 2000 persons attended.”1 Although the hard-hitting Phillies resided in the National League cellar, five of their starters in this game were batting better than .300, with Lefty O’Doul and Chuck Klein near .400. On the other hand, their pitching staff allowed almost seven earned runs per game. That proved to be evident in this game. For the Cardinals, every starting position player had a batting average over .300. More importantly, the St. Louis pitching staff was allowing two fewer runs per game than the Phillies.

Cardinals starting pitcher Burleigh Grimes tossed a complete game despite allowing 11 hits and six runs (five earned).2 Phillies starter Claude Willoughby lasted only one-third of an inning, facing five batters, and allowing all five to reach. Taylor Douthit started the bottom of the first inning with a single to right but was thrown out trying to stretch the hit into a double. Sparky Adams and Frankie Frisch drew back-to-back walks, and Jim Bottomley singled past second baseman Fresco Thompson, driving in Adams with the Cardinals’ first run. With Hafey batting, Frisch and Bottomley pulled off a double steal. Hafey then sent a Willoughby offering into the left-center-field seats for a three-run homer, and the score was suddenly 4-0. That’s when Philadelphia manager Burt Shotton3 pulled Willoughby for reliever Harry Smythe. Smythe and fellow reliever Buz Phillips did not fare any better, as the trio of Philadelphia hurlers gave up 19 hits and three walks in the game. St. Louis posted multiple runs in each of the first four innings.

With one out in the second, Grimes and Douthit singled. Adams’s single knocked in Grimes. Frisch followed with a two-run double. After Bottomley grounded out, Hafey sent a short pop fly to left field. Phillies shortstop Tommy Thevenow raced back to make the catch, but collided with left fielder O’Doul and dropped the ball. The official scorer credited Hafey with a triple and another run batted in to make it 8-0.4 O’Doul injured his leg in the collision and although he finished the inning in the field, he was replaced by Bernie Friberg in the top of the third inning.

Grimes helped his own cause with a two-run double in the bottom of the third.5 In the St. Louis fourth, singles by Bottomley, Hafey, and Gus Mancuso brought the Cardinals’ run total to 11 and sent Smythe to the showers. Charley Gelbert greeted Phillips with a double to left-center field, and Hafey and Mancuso scampered across the plate. St. Louis led by 13-0 by the time the Phillies came to bat in the top of the fifth inning. Hafey, already with a home run, triple, and single in four innings, batted again in the fifth inning and flied out to Klein in right field.

Philadelphia’s bats awakened in the top of the seventh. Friberg singled, Klein doubled, and Don Hurst reached on an error by first baseman Bottomley as Friberg scored. Pinky Whitney singled to bring Klein around. An out later, with Whitney at first base and Hurst at third, Spud Davis hit a sacrifice fly to Douthit in center, driving in Hurst. Whitney, thinking there were already two outs, was running with the crack of the bat and was doubled off first. The Phillies were limited to three runs on three hits.

In the bottom of the seventh, the Cardinals scored three unearned runs. After Adams reached on an error by third baseman Whitney, Bottomley came up with two outs and stroked a single to right field, putting runners at the corners. Hafey then drove a Phillips pitch into left field for a double, driving in Adams and completing the cycle. He and Bottomley scored when George Watkins singled to right.

The Phillies added three more runs in the ninth inning on three singles, a hit batsman, and a walk. However, it was too little, too late, and the game ended with the score St. Louis 16, Philadelphia 6.

As a team, St. Louis batters had six doubles, a triple and a home run. Hafey’s home run was his 23rd of the season; the triple was his 11th. Hafey almost accomplished a “reverse natural” cycle, but his order was home run, triple, single, double.6 His line score for the game was 4-for-5 with three runs scored and five runs batted in. The Cardinals batted an amazing 10-for-19 with runners in scoring position. Frisch and Bottomley helped Hafey lead the charge, with Hafey and Bottomley collecting four hits and Frisch scoring two runs and driving in two.7 Every starting player for St. Louis got at least one hit.

Chick Hafey was a star with the Cardinals and one of the best right-handed batters in the game. Despite being one of the first major-league position players to wear eyeglasses,8 from 1928 through 1930, the future Hall of Famer batted .337, averaging 27 home runs and 114 runs batted in. He led the National League in batting in 1931 with a mark of .349 and led the Cardinals in Wins Above Replacement in 1929 (4.3) and 1931 (4.2). WAR didn’t exist as a statistic then, and was compiled retrospectively. As a member of the Cincinnati Reds, Hafey batted cleanup in the inaugural All-Star Game in 1933.

The Cardinals went on to take four more from the Phillies and sweep the five-game series, outscoring Philadelphia 50-28. It was part of what would be a nine-game winning streak.10 Grimes won the series opener; he also earned the victory in the series finale. Willoughby took two losses for Philadelphia (this game and the fourth game of the series). From August 20 to the end of the 1930 season, the Redbirds were red-hot, finishing the campaign by winning 31 of their final 37 games and nosing out the Chicago Cubs by two games for the NL pennant. The Phillies finished dead last, 40 games behind the Cardinals, who fell to another Philadelphia team, the Athletics, in the World Series.11

2 Grimes began 1930 with the Pittsburgh Pirates but was traded to the Boston Braves during the final days of spring training on April 9. On June 16 he was traded to St. Louis. His record with the ’30 Cardinals was 13-6 with a 3.01 earned-run average.

4 This might be one of the very few times in history that the play-by-play (in both Retrosheet and Baseball-Reference) lists a “triple to shortstop.”

6 A “reverse natural” cycle occurs when a batter hits the home run first, then the triple, then the double, and finally the single.

7 In addition to Hafey, Frankie Frisch and Jim Bottomley are Hall of Famers. Frisch had been NL Most Valuable Player in 1931 and Bottomley had earned that honor in 1928.

10 This nine-game stretch of victories equaled the Cardinals’ longest win streak of the season, from May 7 to 16. From May 7 to 26, the Cardinals won 17 of 18 games, landing them in first place in the National League. But they then lost 14 of the next 16 games, plunging them to fourth place, where they remained until late August.

11 The Cardinals lost to the Athletics in six games in the 1930 World Series, giving Philadelphia back-to-back championships. In 1931 St. Louis and Philadelphia met again in the fall classic, and this time the Cardinals won, in seven games.