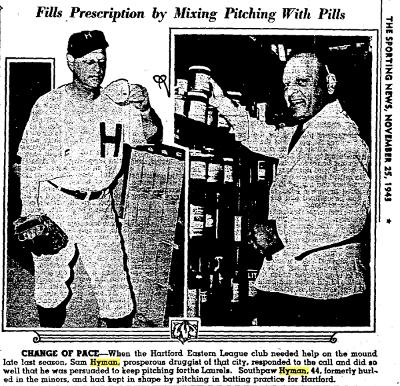 When The Sporting News, a.k.a. “the bible of baseball,” describes a long-ago story as “one of baseball’s stranger episodes,” you know it has to be pretty unusual.1

Indeed, the story of a 44-year-old pharmacist in Hartford, Connecticut, coming off the sidelines during World War II to throw a complete-game win is a memorable yarn—even if some key details might have been misunderstood in the story’s original telling.

The pharmacist, Sam Hyman, had spent more than a decade as a good minor-league pitcher in the 1920s and ’30s. News stories from September 1922 reported his late-season call-up by the Detroit Tigers, though he did not appear in a big-league game.2 Between 1923 and 1930, the left-hander posted three 20-win seasons in the Eastern League, then a Class A circuit. In his best season, he went 24-6 with the 1930 Allentown (Pennsylvania) Dukes.

Unlike some ballplayers, Hyman had another career option. He’d attended the Georgetown University School of Pharmacy and was later part of the first graduating class of the Connecticut College of Pharmacy.3 In the late 1930s, he left ballplaying behind,4 and by 1943, he owned and operated the Roosevelt Drug Co. on Franklin Street in his hometown of Hartford. Married with two daughters, he stayed loose in his spare time by sometimes throwing batting practice to the local minor-league team, the Hartford Senators, a Boston Braves affiliate in the Eastern League.5 Hyman had a personal connection to the team, as he and manager Del Bissonette had been teammates at Georgetown.6

The Senators entered an August 22 home doubleheader with a record of 55-53, sixth in an eight-team league, 18 games behind first-place Scranton. Their opponents, the Wilkes-Barre (Pennsylvania) Barons, stood one place ahead of them with a 59-53 record, 16 games back. Managed by future Hall of Famer Tony Lazzeri, the Barons were a Cleveland Indians affiliate. The Scranton team was on course to run off with the pennant race, with a torrid 75-37 record. At the other end of the standings, last-place Utica had a pathetic 26-83 mark.7

Seven players on the visiting Barons played in the big leagues at some point, including manager Lazzeri, who played in 58 Hartford games. Three future big leaguers started for Wilkes-Barre in the first game of the doubleheader: center fielder Gene Woodling, left fielder Cliff Mapes, and catcher Jim Devlin.8 Starting third baseman Phil Seghi never made the big leagues as a player but worked in major-league front offices for many years, including 13 seasons as general manager of the Indians in the 1970s and ’80s. The start on the mound went to 18-year-old lefty Vincent Stukosky,9 who went 10-7 with a 3.45 ERA in his only recorded professional season.

Hartford’s starting pitcher was a matter of great concern, as the team’s pitching staff was temporarily depleted. Ben Cardoni had been called up to Boston, making his big-league debut on August 22, and Allyn Stout had been suspended. The Senators were shorthanded at other positions too: Starting catcher Johnny Stats was playing part-time, juggling baseball with a day job in an essential defense industry.12 A story in the Hartford Courant made Bissonette’s pitching problems sound still more pressing: “One pitcher had poison ivy on his pitching arm, two hurlers had neglected to show up, another moundsman had been shipped to Boston and a fifth pitcher was ineligible because he had broken some rules.”13

At this point, the legend of Sam Hyman appears to diverge somewhat from the facts. Stories in several media outlets—including the Courant, wire services, and The Sporting News—related the following version of events: Hyman went to the ballpark to unwind and watch the doubleheader from the stands. When he heard that Bissonette was drastically short on pitching, he offered to step in until another hurler could arrive. Hyman hastily signed a contract while a batboy went to fetch his equipment from home. And when Game One started, the pharmacist was on the mound, a professional pitcher once again.14

It’s a great story, but other information in the Hartford newspaper casts some doubt on it. Hyman actually signed a contract the day before the game, as reported in the Courant’s Senators game story on August 22.15 Sports editor Bill Lee also mentioned the signing in his August 22 column, writing: “You’ll know how bad (the player shortage) is when you learn that Sam Hyman was signed last night. … He has been working out almost daily, has good control and a good noodle so he might be of some use.”16 This indicates that Hyman’s appearance was not entirely spontaneous. While Hyman might have been a last-ditch option, the fact that he signed a contract in advance suggests that the Senators knew they might need him.

Hyman “didn’t have an easy time” in his comeback, and Bissonette had another pitcher warming up at two points in the game, the Courant noted. In the second inning, the Barons put runners on first and second with none out. But Hyman picked second baseman Ned Tryon off second base, and the visitors’ rally advanced no further.17

Tryon got a measure of revenge in the third inning, driving in Seghi and Mapes with a single to give Wilkes-Barre a 2-0 lead. Stukosky, who had not been born when Hyman began his pro career, coughed up the lead in the bottom half of the inning. After Wentzel and third baseman Jimmy Francoline18 collected hits, Cotelle drove them in with a triple. A fly ball by Manno put Hartford ahead, 3-2.19

The fifth inning saw both teams rally, but only one team score. In the top half, Hyman issued a pair of two-out walks that, combined with an earlier baserunner, loaded the bases. Catcher Devlin grounded out to Francoline, wasting the opportunity. In the bottom half, Cotelle singled, stole second, and scored on a single by Manno. Second baseman Neill’s drive to left evaded Mapes for an RBI triple, and catcher Stats singled him in for a 6-2 lead.20

In the bottom of the sixth, a walk to Hyman and a double by Wentzel spelled the end of Stukosky’s afternoon. Running to third on Wentzel’s double, Hyman found that he was in good shape to pitch, but had a harder time running bases.21 Substitute right fielder Harold Nichols singled Hyman and put runners on first and third, and reliever Hal Kleine walked Etchison and Neill to force in another run. The inning ended with Nichols tagged out trying to score on a wild pitch, but Hartford had established a controlling 8-2 lead.22

Since Eastern League doubleheaders featured seven-inning games, Hyman wrapped up matters in the top of the seventh. In his complete game, the crafty pharmacist scattered eight hits, walked three, and struck out three. The game lasted 1 hour and 42 minutes, and a Sunday crowd of 2,694 was on hand to watch. In the second game, Hartford starter Jack Phillips surrendered only two hits to Wilkes-Barre, both off the bat of Woodling. The sweep pushed Hartford ahead of Wilkes-Barre and into fifth place, still in the running for a playoff spot.23

The Sporting News reported that Bissonette persuaded Hyman to keep pitching through season’s end, and even talked him into leaving his drugstore in September to make a road trip.24 Hartford and Wilkes-Barre closed the season in third and fourth place, respectively. Both teams earned trips to the postseason but lost in the first round.25

According to the Courant, Hyman made brief end-of-season appearances as a fill-in with Hartford minor-league teams in 1946 and 1949,26 and also pitched in local exhibition games throughout the 1940s. He was in the bullpen for a local amateur team when Josh Gibson, Cool Papa Bell, and the Homestead Grays came to Hartford in 1945,27 and pitched an inning against the Boston Braves that same year in an exhibition between the Boston big leaguers and their Hartford farm club.28

Sam Hyman died in Hartford at age 74 on March 30, 1973, leaving two siblings, two daughters, three grandchildren, and one great-grandchild.29 His passing was reported in the April 28 edition of The Sporting News, giving a national audience one last reminder of the long-ago story of the pitching pharmacist.30

Neither Baseball-Reference nor Retrosheet provides box scores of minor-league games, but the August 23, 1943, edition of the Hartford Courant published a box score.

4 1933 is the final season for which Baseball-Reference has a record of Hyman as a full-time player. But since Baseball-Reference has no record of Hyman playing in 1943, its records are clearly incomplete. Various articles cited in this story provide different information on Hyman’s career. The Sporting News’s report that Hyman retired in 1933, but was briefly talked back into action by the Albany Eastern League team in 1938, ties the various accounts together most believably.

5 Baseball-Reference refers to the 1943 Hartford team as the Bees, but news coverage of the time calls them the Senators—a reference to Hartford’s status as state capital.

8 Wilkes-Barre players who appeared in the big leagues but are not mentioned in this story were Jim McDonnell and Pat Seerey. The team also included first baseman Ed Sudol, who never reached the majors as a player but later umpired for 21 seasons in the National League. Sudol entered the US Army in late July 1943 and was not on the team’s roster on August 22.

9 Baseball-Reference spells his name Stukoski, but news coverage of this game spells it Stukosky. The Wilkes-Barre Record also spelled it Stukosky in 1943 game coverage. Stukosky was a local boy, from nearby Swoyersville, Pennsylvania.

10 The other Senators who reached the big leagues but are not mentioned in this story were Bob Brady, John Dagenhard, Ben Geraghty, Heinie Hetzel, Carl Lindquist, Pete Naktenis, and Roy Talcott. Not all would have been on the roster on August 22.

15 In other words, these newspaper items appeared on the day Hyman pitched.

16 Lee. The apparent discrepancy between Lee’s column of August 22 and Marks’s Page 1 story of August 23 in the same paper seems impossible to reconcile at this point.

18 His last name was often misspelled Francolini in game stories, but a Courant obituary from 2012 identifies him as James J. Francoline Sr. See endnote 13 in SABR Games Project story “September 7, 1952: Hartford goes out a winner before 64-year break from Organized Baseball,” by Kurt Blumenau.

25 The Elmira (New York) Pioneers, a Philadelphia A’s farm team, knocked off the dominant Scranton Red Sox in the finals.

30 The Sporting News’ obituary claimed that Hyman was pressed into service when all five of Hartford’s pitchers were “stranded by wartime transportation problems” and unable to get to the ballpark. This explanation is not present in stories from 1943.