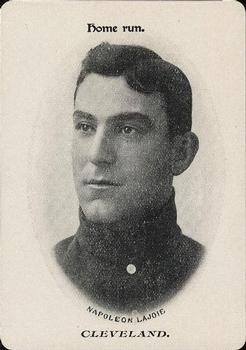 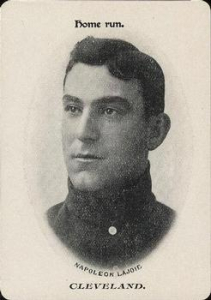 When Nap Lajoie was a child, he earned the nickname Sandy from his baseball-playing friends in Woonsocket, Rhode Island. The moniker had nothing to do with the game, but everything to do with shielding Lajoie from his mother’s wrath.

Celina Lajoie did not care for baseball. The widowed mother of eight surviving children saw participating in the game as a waste of time that could be spent working to help support the family.1 Because she did not speak much English, Nap’s friends began to call him Sandy instead of Napoleon to disguise his ballplaying. And it worked.

By the time Nap Lajoie reached adulthood, he had become a star and pursued a full-time baseball career. Once he reached his peak, after emerging with the Philadelphia Phillies in the 1890s, Lajoie was considered the greatest player in the major-league game, though his mother had still never watched him play.

In April 1902, in a contract dispute between the National League’s Phillies and the new American League’s Philadelphia Athletics, the Pennsylvania Supreme Court had barred Lajoie and Cleveland Bronchos teammate Bill Bernhard from playing baseball in Pennsylvania. A third Broncho, Elmer Flick, found himself in a similar situation that wasn’t as legally binding, and also avoided Pennsylvania to spare himself any potential trouble.2

With the Bronchos and Athletics scheduled for a three-game series in Philadelphia August 23-26, Lajoie, Flick, and Bernhard continued north to Lajoie’s hometown of Woonsocket, Rhode Island. There they joined forces with some semipro players from nearby Whitinsville, Massachusetts, to face the Woonsocket Gyms in a well-attended matchup between the fierce New England rivals.

Celina Lajoie was among the thousands of fans in attendance at Woonsocket’s Clinton Oval, but much of that record crowd was left disappointed as the Cleveland stars helped Whitinsville to an 8-1 victory.3

Lajoie said he would have preferred to play for Woonsocket “had the management agreed to his terms, which were much lower than those Whitinsville accepted.”4 It was later reported that the Gyms could have gained Lajoie’s services for $25, and Gyms management was heavily criticized in the Woonsocket Evening Call because “there is something else to be thought of in baseball besides the dollar.”

“The people who have been attending the games are entitled to better treatment,” the paper suggested. “If the Gyms had Lajoie, and they could have had him if they so desired, the game would have been much different.”5

In the first inning, Lajoie sent a two-out double to center. It would have been a home run had ground rules not been in place to accommodate the overflow crowd, which included more than 1,000 fans who rode a special train from Whitinsville. Lajoie scored on Flick’s single to left to give Whitinsville a quick lead.

Lajoie reached on an error by third baseman Billy Dyer with one out in the third, moved to third on Flick’s double, and both Lajoie and Flick scored on a single to left. There may have been a close play at the plate to retire Flick, but a poor throw from Eddie Loughlin hit Flick in the back as he raced home.

Ollie Faulkner, the starting pitcher for Woonsocket, doubled to open the bottom of the frame and moved around the bases on a grounder and a fly ball to cut Whitinsville’s lead to 3-1.

Action was quiet until the sixth, when a costly error by the Gyms allowed Whitinsville to score five more runs with two outs. With runners on first and second, Lajoie sent another shot to third baseman Dyer, who let the ball slip between his legs and into left field. Instead of ending the inning with a routine play that “any ordinary high school boy should have handled,”6 Dyer’s muff allowed Whitinsville to score a run, and three straight hits after that led to the final tally of 8-1. Bernhard was the winning pitcher for Whitinsville.

While Lajoie, Flick, and Bernhard enjoyed the spoils of victory in Woonsocket, their Cleveland teammates were being walloped by the Athletics 12-1, and also lost the next two games, 7-3 and 13-2. Cleveland had also been swept in three games the first time they were without the trio in Philadelphia, July 19-22.

It’s unlikely those games had a major impact on the final standings, unless the Bronchos had found a way to reverse all six losses. The Athletics won the 1902 pennant by five games over the St. Louis Browns, while Cleveland was six games behind the fourth-place Chicago White Sox. The Bronchos were 6-4 against Philadelphia in games played at League Park after the new players arrived.

This was not the first time a Broncho had moonlighted while his teammates played in Pennsylvania. During Cleveland’s July 1902 series in Philadelphia, Flick had played with Whitinsville and hit a home run in a 10-9 come-from-behind extra-inning victory over a team from East Douglas, Massachusetts, on July 19. Dike Varney, whose major-league career spanned three starts for Cleveland in 1902, joined Flick for that game, and he pitched for Woonsocket later in the season.

Whitinsville hosted the Gyms a week later, on August 30, and once again used major-league talent to defeat their rivals. In front of about 2,000 spectators, Brooklyn Superbas pitcher Doc Newton and outfielder Jimmy Sheckard helped push Whitinsville to a 5-1 win.

Sheckard had been ejected from a game in Pittsburgh on August 25 after a heated argument with umpire Arthur Irwin, who failed to call interference against Honus Wagner after he knocked over Brooklyn’s Bill Donovan while rounding first base. After the incident, Sheckard was suspended for Brooklyn’s games in Boston on August 29 and 30, and he took Newton with him to Whitinsville, which gave the left-handed hurler a chance at beating the Gyms again. On August 3, 1901, Newton had pitched Whitinsville to a 2-1 victory at the Clinton Oval.

A week later, Whitinsville made it three straight wins over the Gyms with a 5-4 victory back at the Clinton Oval that left the local fans “disgruntled and sore.” Brooklyn’s Roy Evans earned the victory for Whitinsville, and while Woonsocket had Chicago Orphans rookie pitcher (and future Cleveland Naps regular) Bob Rhoads on hand, he didn’t appear in the game – a very small consolation to an announcement by team management earlier in the week that “four or five [major-]league players would be secured.”7

In 1903 the Gyms finally made good on their promise to bring in major leaguers to knock off Whitinsville. On May 30 Woonsocket swept a home-and-home doubleheader with the help of George Davis, Chub Aubrey, Warren McLaughlin, and Henry Thielman, while Whitinsville countered only with Louis Sockalexis and several minor leaguers from around the region.

The 1903 season was also more pleasant for Lajoie, Flick, and Bernhard. As part of the peace agreement struck between the American and National Leagues before the campaign, the court ruling against Lajoie and Bernhard was tossed out. Flick and Lajoie played their first games at Columbia Park as members of the Bronchos on June 11, 1903. Lajoie doubled in four tries, while Flick was held without a hit in four at-bats in a 3-2 win for the Naps. Bernhard didn’t pitch in Philadelphia until July 11, when he outdueled Rube Waddell in a 10-3 Cleveland victory.

This article was fact-checked by Mike Huber and copy-edited by Len Levin. Special thanks to the Woonsocket Public Library staff for providing local newspaper articles related to this game.

In addition to the sources cited in the Notes, the author consulted the Baseball-Reference.com, and Retrosheet.org websites for pertinent materials and the box scores. He also used information from Napoleon Lajoie: The King of Ballplayers by David L. Fleitz (Jefferson, North Carolina: McFarland & Company, 2013) and the SABR Baseball Biography Project biography of Nap Lajoie, which was written by Stephen Constantelos and David Jones.

1 Napoleon Lajoie was the youngest of the children. His father, Jean Baptiste, died in 1881. To help support the family, Nap began working in 1885 before he was a teenager, but still found time to play baseball with his friends.

2 Flick was not enjoined in the Pennsylvania Supreme Court ruling that barred Lajoie and Bernhard from playing in the state. Flick’s case was different because he didn’t jump his Phillies contract until the 1902 season, while Lajoie and Bernhard joined the Athletics for the 1901 season.