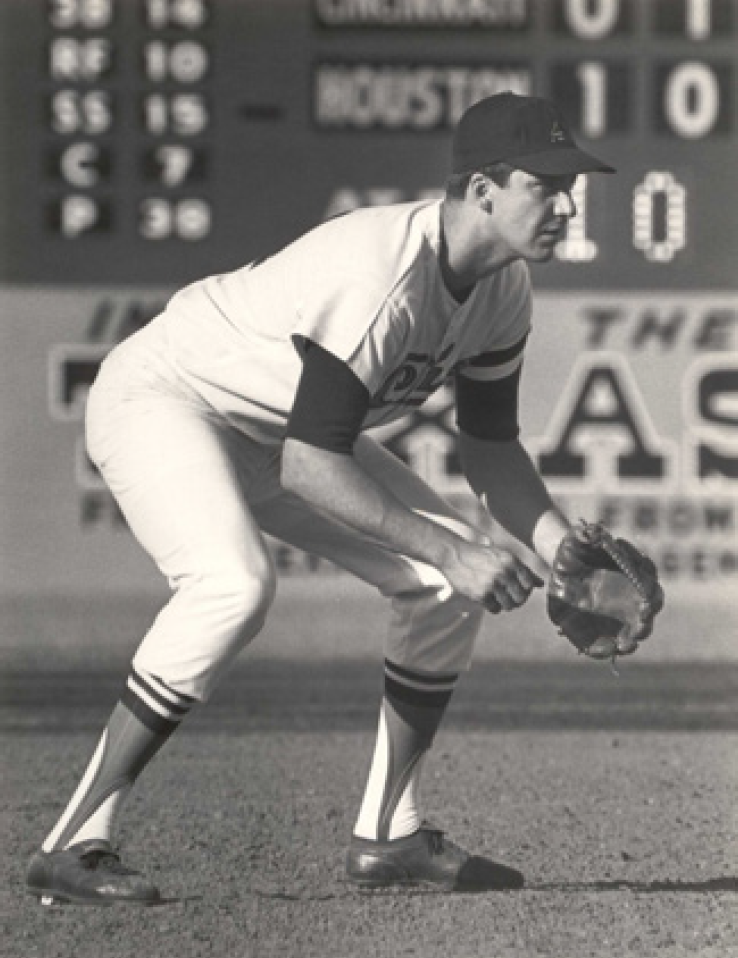 You’ve heard it before. A batter steps up to the plate in a pressure situation, humbly claims that his solitary goal is to get a bat on the ball, keep the inning alive, and hopefully give his team a chance to win. The prospect of something heroic is just gravy, perhaps even sheer luck. Just don’t strike out or hit into a game-ending double play. Make contact and force the defense to make a play. Often forgotten is that the result of such a nail-biting drama might be dictated by the type of pitch and its location.

Apparently, Astros third baseman Bob Aspromonte ignored such edicts and instead, cranked a game-winning grand slam off reliever Cal Koonce in the bottom of the ninth inning to give Houston a dramatic 7-4 victory. It was Aspromonte’s sixth career grand slam and his second against Chicago in little more than two weeks.

In his last four games against the Cubs, Aspromonte had driven in 13 runs, 12 in the last three games. This latest slam inched Aspromonte closer to rare company. At the time, only six contemporary players had hit more than six grand slams in their career. The elite group consisted of an array of familiar names: Ernie Banks, Hank Aaron, Dick Stuart, Ken Boyer, Eddie Mathews, and Bill White.1 Three of them — Banks, Aaron, and Mathews — became Hall of Famers.

“In that case, you are just looking for a base hit to win the game,” said Aspromonte after the game. “The most important thing is you’re trying to prevent the double play. And you want to try to lift the ball to get a fly to score the tying run and keep from hitting into the double play.” Koonce threw Aspromonte a slider, which apparently stayed up. “I knew I had hit that one,” said Aspromonte. “I knew I had hit that (so and so) and it was going out.”2

Born Robert Thomas Aspromonte in Brooklyn, New York, in 1938, the 6-foot-2, 170-pounder signed with his hometown Brooklyn Dodgers in 1956 and had one major-league at-bat that season as an 18-year-old rookie. He worked his way back to the majors in 1960, after the team had moved to Los Angeles, and was then drafted by the Houston Colt 45s in the 1961 expansion draft — five years after his pro debut. Aspromonte would later become the last Brooklyn Dodger to retire from baseball (1971). His older brother, Ken Aspromonte, last appeared in the majors in 1963 after a seven-year career.

The victory left the Astros with a 58-70 record in what had become a disappointing season. First-year manager Grady Hatton had replaced Lum Harris, who had compiled a dismal 70-105 record over less than two seasons. Hatton would suffer Harris’s fate two years later, relinquishing the reigns to Harry “The Hat” Walker in 1968. In 1966 outfielder Jimmy Wynn was lost for the season on August 1 when he crashed into the wall at Connie Mack Stadium in Philadelphia. Wynn led the Astros with 18 homers despite missing the final two months of the season.

Controlling most of the game from the mound was the Cubs’ rookie starter, Ken Holtzman. The young left-hander handcuffed the Astros batters for eight innings. He had retired the Houston lineup in order in the seventh and eighth innings. Before the ninth, the last batter to reach base against him was Rusty Staub, who led off the sixth with a double and was left on second. The Houston Chronicle declared that Holtzman seemed to be in control and it “looked as if the Cubs had it wrapped up.”3

Houston starter Dave Giusti lasted just 4⅓ innings, handing out seven hits, two walks, and all four Cubs runs. Chicago struck first in the third inning on Billy Williams’s two-run homer. The Astros countered with a run in the bottom of the inning when Chuck Harrison knocked in Joe Morgan from third with a single to left; the ever-patient Morgan had walked to lead off the inning. The Cubs knocked Giusti from the box in the fifth. Ron Santo smacked a one-out, two-run homer and after Ernie Banks followed with a single, Hatton yanked Giusti in favor of Carroll Sembera, who would pitch 2⅔ scoreless innings.

After the fifth the combatants traded zeroes for the next few innings, and the Cubs carried their 4-1 lead into the bottom of the ninth. Then the fireworks rocked the one-year-old Astrodome. John Bateman greeted Holtzman with a solo blast to lead off the ninth, the 16th of the season for the young catcher. Dave Nicholson followed with a single to left. After Ron Davis flied out, Ron Brand batted for reliever Turk Farrell, who had hurled two scoreless innings. Brand coaxed a walk off Holtzman, which sent Cubs manager Leo Durocher into a brief — albeit not uncharacteristic — tirade. Durocher yanked the phone off the wall in the dugout and tossed it onto the field in a fit of rage. Home-plate umpire Tony Venzon, opting to forgo a vociferous response to the Lip’s antics, gathered the phone and returned it to the “scene of the crime.” Astros owner Roy Hofheinz witnessed the temper tantrum and swiftly announced that Durocher would be billed for the replacement of the “dismembered” phone.4

Play resumed after Durocher replaced Holtzman with lefty Bob Hendley. Once again the prince of walks, Morgan, drew another, his third walk of the game. Before the game Morgan had expressed dismay over his recent hitting slump — he was batting just .246 since his return from the disabled list on August 5 — but he played a critical role in this game.5 With the bases loaded, Sonny Jackson, who set a rookie record in 1966 with 49 steals, beat out a chopper to shortstop Don Kessinger, plating Nicholson and cutting the deficit to two runs. Out of the dugout again came Durocher, who replaced Hendley with right-handed changeup artist Cal Koonce.6  Next in the batter’s box came Aspromonte.

Koonce, a master of changing speeds, apparently taught to him by his father,7 elected to throw a slider, which Aspromonte parked into the left-field seats for the game-winner. Not a slugger, in 250 previous at-bats that season in the Astrodome, he had never reached the seats. The Houston Chronicle opined that “hopes certainly were high, but anyone who thought he was going to hit it into the stands must have been a romanticist.”8 Farrell (6-8) got the win and Hundley (4-4) took the loss. Aspromonte entered the game batting .257, not the numbers of a prolific slugger. (He ended the season at .252.) This day, though, belonged to the eight-year player.

The Houston Post quipped that, before Koonce entered the game, Durocher had batted .000 with his choice of relievers, and added, “Aspromonte saw to it that Lip’s average didn’t change.”9 To make matters worse, Houston got another walk-off win over the Cubs the next night, when Chuck Harrison’s two-out single lifted the Astros to a 5-4 victory.

Durocher, in the first of eight seasons as Cubs manager, was saddled with a team that would finish last in the 10-team National League. The Astros didn’t fare much better in 1966, finishing in eighth place, 23 games short of first but 13 games superior to the lowly Cubs.