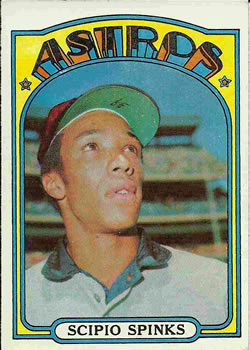 Scipio Spinks and Gary Nolan never faced off as starting pitchers in the major leagues during the five seasons, 1969 through 1973, when their careers overlapped in the National League.

That’s a shame, because when the pitchers started against each other in the short-season Class A Northern League one night in August 1966, they combined for an unforgettable matchup. Through nine innings of shutout ball, Spinks and Nolan struck out 37 hitters—a league-record 20 by Spinks, 17 by Nolan. Despite their dominance, neither starter emerged with a decision. Instead, Nolan’s bullpen coughed up the game in the bottom of the 10th inning on a series of plays involving another future major leaguer.

The late-season game matched up the league’s two doormats, which might explain why only 133 fans in Bismarck, North Dakota, came out to watch. Nolan’s Sioux Falls Packers, a Cincinnati Reds farm team, stood in fifth place in the six-team league with a 19-38 record, 23½ games behind front-running St. Cloud. Spinks’ Bismarck-Mandan Pards, a Houston Astros affiliate, were even worse—26 games out of first with a 14-38 record.1 The Pards closed the season with a 16-47 record and .254 winning percentage.2 Other professional baseball teams had worse seasons in the twentieth century, but not that many.3

Sioux Falls manager Jim Snyder had been a big-league infielder with Minnesota just two seasons earlier. Two members of the 1966 Packers followed him to the big leagues, and Snyder started both of them on August 26. Darrel Chaney hit second and played shortstop, and Nolan, of course, started on the mound. Chaney hit .206 that season as an 18-year-old rookie, foreshadowing his later role as a good-field, no-hit infielder in the majors.4 Nolan, also 18, had been the Reds’ first-round pick in that June’s draft. He compiled a 7-2 record and a 1.82 ERA in 12 starts. He finished in the loop’s top three in complete games (9) and strikeouts (163 in only 104 innings).

Bismarck-Mandan manager Tony Pacheco5 never reached the majors as a player but served as a coach with the Astros and Cleveland Indians for eight seasons between 1974 and 1982. While a 16-47 ballclub might not seem like a hot spot of future talent, seven of the team’s players went on to the major leagues. One, pitcher Roric Harrison, had struck out 15 Sioux Falls batters the night before in a 5-2 Pards victory.6 Spinks, who had signed with the Astros organization as an undrafted free agent the previous month, appeared in 15 games for the team, all but three in relief. He went 1-1 with a 2.54 ERA and struck out 52 hitters in 39 innings.

Besides Spinks, only one other future big leaguer appeared for the Pards on August 26. A recent addition to the Bismarck-Mandan roster, 18-year-old shortstop Fred Stanley was chosen by the Astros out of his California high school in the eighth round of that year’s June draft. He played 52 games at Class A Salisbury before joining the Pards for 12 more.7

Chaney started a first-inning rally for Sioux Falls by singling with one out. Spinks struck out the next batter for his first K of the night. But he followed by hitting first baseman George Nichols with a pitch and walking right fielder Jim Cartlidge to load the bases. Milt Bender, who started the game at third base, fouled out to the first baseman to end the rally.8

From there, Spinks dominated. He struck out 19 more Packers over the next eight innings and allowed just one additional hit. Second baseman Tony Murphy singled in the second inning and was thrown out trying to steal second. Spinks walked three additional hitters, and third baseman Franklyn Sands committed an error behind him, which gave Sioux Falls a few chances to score. The Packers moved runners into scoring position in the second, third, and eighth innings, but could not muster the offense to get them across home plate.9 Spinks’s SABR biography indicates that he struck out the side in the ninth. According to the pitcher, Pacheco promised him a steak dinner if he did so, but never delivered.10

For his part, Nolan scattered six singles and three walks across nine innings of work. Pards second baseman Rick Lynn, a .183 hitter that season, went 2-for-4, while four other hitters—including Stanley—collected one knock apiece. The Packers made no errors behind Nolan. Bismarck-Mandan loaded the bases in the ninth, but Nolan retired Lynn to escape the inning and end his night unscathed.11

Reliever Mike Guillot worked the 10th inning for Bismarck-Mandan. Guillot tied for the league lead in losses that year, going 2-9 with a 6.35 ERA in 17 appearances, including six starts. He also tied for third in hit batsmen and home runs surrendered, with seven apiece. It was his only professional season. Guillot kept up Spinks’ fervid strikeout pace: He whiffed the first two hitters he faced, walked the next two, then struck out center fielder Bill Goodman looking to end the frame. Goodman argued the call with umpire Bill Wyse, who ejected him for his trouble.12

Daryl Hallmark, who went 3-3 with a 3.92 ERA in 23 appearances, took over for Sioux Falls in the bottom half. Hallmark got catcher Bill Steinkamp13 on a grounder to shortstop and struck out Guillot for the 41st and final whiff of the ballgame.

Stanley was next; he worked Hallmark for a walk and moved to second on a wild pitch. Center fielder Al Pauska, who hit .137 in 51 games in his only pro season, grounded to second baseman Murphy on a 2-and-2 count. Murphy fired to Bender, who had moved from third base to first earlier in the game. Bender dropped the throw and couldn’t find the ball. His error allowed Stanley, running on contact, to round third and come home with the game’s only run.14 The game ended in 2 hours and 45 minutes, with Guillot earning the win and Hallmark taking the loss despite not allowing a hit.

Nolan jumped all the way to the major leagues the following season. At age 19—the youngest player in the National League—he went 14-8 with a 2.58 ERA for Cincinnati, leading the league in strikeouts per nine innings and finishing third in Rookie of the Year voting behind winner Tom Seaver and Dick Hughes. Although arm problems limited his career, he won 15 games apiece for Cincinnati’s World Series-winning teams of 1975 and 1976, starting and winning the clinching Game Four in 1976.

Spinks reached the big leagues in September 1969 with the Astros, then was traded to the Cardinals in April 1972. He got off to a good start in St. Louis: At the close of play on July 4, he was tied for third in the National League with 93 strikeouts, with a 5-5 record and a 2.67 ERA. His season ended that day, as he tore ligaments in his right knee in a home-plate collision with Cincinnati’s Johnny Bench. Spinks missed the rest of the season, pitched only eight games in 1973, and did not appear again in the majors.

The city of Bismarck lost its affiliation with the Astros after the 1966 season. As of 2021, Bismarck has not hosted an affiliated minor-league team since, though independent and collegiate summer teams have called the city home in recent years. Sioux Falls held on to affiliated ball through the 1971 season and, as of 2021, has hosted an independent team for many years.

Neither Baseball-Reference nor Retrosheet provides box scores of minor-league games, but the August 27, 1966, editions of the Bismarck (North Dakota) Tribune and the Sioux Falls (South Dakota) Argus-Leader published box scores.

Image of 1972 Topps card #202 downloaded from the Trading Card Database.

2 Sioux Falls finished the year 26-41 for a .388 winning percentage—not good by most standards, but well ahead of the Pards.

5 The August 30, 1966, Bismarck Tribune reported that Pacheco had been sidelined by an unknown illness, and the September 9 edition reported that Walt Matthews, a manager from elsewhere in the Astros’ minor-league system, replaced him for the final few games of the season. However, Pacheco appears to have still been with the team on August 26.

7 Heidt’s August 26 game story (see note 6) describes Stanley as a “newly-acquired shortstop.” The other Pards who went on to the big leagues were Tom Griffin, Otis Thornton, Wayne Twitchell, and Bob Watkins. Not all were on the roster on August 26. According to Heidt, Twitchell and Griffin had recently been promoted to higher levels of the minors.

11 Getz. News stories do not specify how the Pards loaded the bases. Lynn’s status as the final hitter of the inning is extrapolated from the fact that the next batter in the lineup, catcher Bill Steinkamp, led off in the 10th. Bismarck-Mandan’s Slidell Harvey is listed in the box score as a pinch-hitter with zeroes next to his name. Since Nolan did not hit any batters, and Sioux Falls did not commit any errors behind Nolan, it seems likely that Harvey walked as part of the ninth-inning rally.

13 Getz’s story and the accompanying box score spell the name Steincamp, but Baseball-Reference and most other Bismarck game stories from 1966 spell it Steinkamp.

14 Getz. Also: Associated Press, “Pards Nip Packers in Tenth Frame,” Sioux Falls (South Dakota) Argus-Leader, August 27, 1966: 3. The error was charged to Bender, not Murphy. So it appears that Murphy’s throw was reasonably on target, and Bender somehow mishandled it and then lost track of the ball long enough for Stanley to score. Bender played 11 games at first for Sioux Falls that season, making two errors.