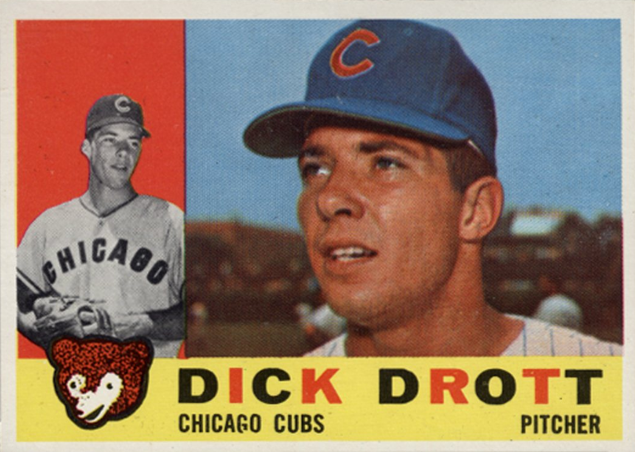 On August 27, 1957, in a game of little interest and with no bearing on the pennant race, the Chicago Cubs visited Ebbets Field and beat the home standing Brooklyn Dodgers in a night game, 9-4. The game was not as close as the final score would seem to indicate. By the top of the fourth inning, Chicago was winning a laugher, 9-2. The action was bookended by Ernie Banks who homered in the top of the first with two on (his 30th) and Gil Hodges who hit a two-run blast in the bottom of the ninth (his 22nd). Chicago’s Chuck Tanner had a double and two singles to provide much of the offense for the visitors.

In spite of the game’s lack of importance as the 1957 season was coming to a close, the contest was an attractive matchup of two of the National League’s (NL) most renowned fire ballers. Brooklyn starter Don Newcombe who the previous year won the Cy Young Award was hammered in the first inning, giving up a double to Chuck Tanner, a walk to Walt Moryn, an RBI-single to Dale Long, and a long line-drive home run to Cubs’ shortstop Ernie Banks. Newcombe simply had nothing that night.

In the second inning, he gave up a walk to Bobby Morgan and a solid single to Tanner sandwiched between two long fly ball outs to pitcher Dick Drott and Bob Speake. Seeing that it was not his ace’s night, Manager Walter Alston Manager gave Newk the hook and brought in Danny McDevitt who put out the fire by striking out Moryn. However McDevitt was knocked around in the third inning and knocked out in the fourth inning. He surrendered four runs on four hits and three walks in 1 2/3 innings. Don Bessent, Carl Erskine, and Roger Craig pitched well in mop-up roles. The game was effectively over before the Dodgers came to bat in the fourth inning.

Chicago Cub pitcher Dick Drott was among the 1957 pitching sensations of the NL. The youngster possessed electric stuff and was wild enough to prevent batters digging in in the box. On August 27, 1957, the youngster’s stat line–four earned runs, six hits, eight walks and one hit batsman allowed with 7 strikeouts–amounted to an off day for the Cubs’ phenom. However, Drott pitched in and out of trouble, allowing only two Brooklyn extra base hits besides his gopher ball to Hodges in the ninth inning–a triple by Gino Cimoli in the first and a double by Carl Furillo in the second.1

What was truly significant about this late season ho-hum game among NL also-rans were the diametrically opposed fortunes (and predicted futures) of the two starting hurlers. In spite of his inconsistency on the mound on August 27th, Dick Drott pitched a workmanlike game for eight plus innings to go to 12-10 on the year. At twenty years of age, he finished the season at 15-11 for a seventh place club (sharing the cellar with the Pittsburgh Pirates) that finished 33 games behind the pennant winning Milwaukee Braves and 30 games under .500 (62-92). Nicknamed the “Hummer,” Drott was second in the league in strikeouts (170) and finished third in the league in voting for the National League Rookie of the Year.2 On the debit side, he led the NL in bases on balls with 129 and was third in wild pitches with seven.3

Dick Drott had a seemingly limitless future in major league baseball. In his seventh start on May, 26, 1957, the young fire baller struck out 15 batters, then a Chicago Cubs record, including getting Henry Aaron three times looking. Testimonials came in droves during Drott’s early success on the mound: “That boy [Drott] is as good a pitcher as anyone I’ve ever seen” (Hall of Famer Robin Roberts) and “I was always amazed at his [Drott’s] curve ball….It was a beautiful pitch. It reminded me of Sandy Koufax’s curve ball and Koufax, in my opinion, was the best pitcher of all-time” (Jim Brosnan, reliever and baseball memoirist).4

Brooklyn Dodger Don Newcombe was the starting and losing pitcher in the August 27th contest. He was knocked out of the box after 1 2/3 innings, surrendering four hits, three walks, and four earned runs. His performance was ineffective and listless, and he was booed unmercifully by the Brooklyn faithful.5 Newcombe’s loss dropped him to 10-11 on the season and was a harbinger of the end of a brief but glorious career in Dodger blue.

After a disastrous 0-6 start in 1958 with the Los Angeles Dodgers, he was traded to the Cincinnati Reds. He finished the season a combined 7-13 with a league-leading 31 home runs allowed. After a bounce back season with the Reds in 1959 (13-8), Don Newcombe was out of baseball after the 1960 season due to arm injuries and incipient alcoholism.7

After the great promise of his 1957 debut season, Dick Drott played six more injury-plagued seasons with only a 12-35 record over the rest of his career. His one outstanding year for a cellar-dwelling club was the highlight of his major league tenure. His only notable achievement after 1957 was being drafted seventh by the Houston Colt .45s in the 1961 expansion team draft.8

The August 27, 1957, NL game between the Brooklyn Dodgers and Chicago Cubs had little impact on the NL pennant race or the season’s fortunes of the two clubs involved. However, the contest did highlight two of the best pitchers of the decade on a night which seemed to portend the rising greatness of one rookie and the sharp decline of an accomplished veteran. That both players never regained premier status as a major league pitcher is a poignant testament to the fragility of baseball careers.

2 Philadelphia Phillies pitcher Jack Sanford was the clear-cut choice for National League Rookie of the Year in 1957. He fashioned a 19-8 record with a 3.08 earned run average. Teammate first baseman Ed Bouchee was second in the voting and Cub hurler Dick Drott finished third. (www.baseball-reference.com/Bullpen.)

5 August 27, 1957, was the first and only time I attended a baseball game at Ebbets Field. I was an eight-year old enthusiastic fan of the Dodgers whose favorite player was Cub great Ernie Banks. I remember vividly asking my father if the rabid fans who were reigning a chorus of boos on their once-beloved hero “if they were going to hurt Newk.” My father would repeat the line then current among Dodger fandom to any and all who would listen to his rants about greedy and disloyal Brooklyn management: “Hitler, Mussolini, and O’Malley are the three most hated men in the world. And I’m not so sure about Mussolini.”