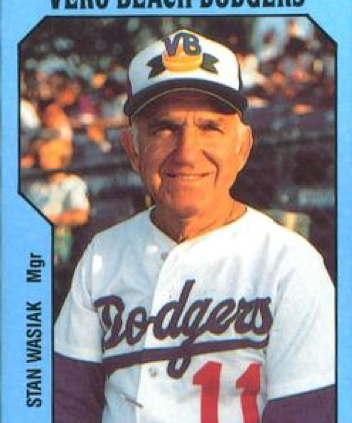 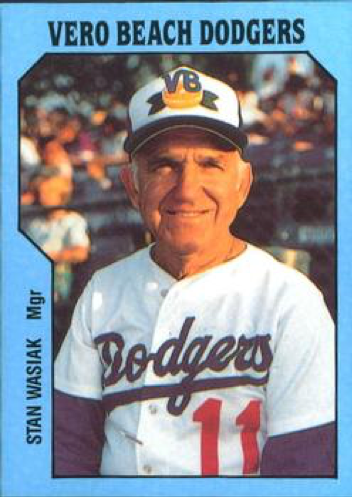 Wasiak, known as “the King of the Minors,” spent a record-setting 37 consecutive years as a minor-league manager in cities from Valdosta, Georgia, to Idaho Falls, Idaho, to Appleton, Wisconsin, to El Paso, Texas. Working at every level of minor-league ball — mostly on the lower rungs — he compiled a record 2,570 wins, along with nine league championships.1 First tapped for a manager’s role by Branch Rickey for the 1950 Valdosta Dodgers, Wasiak nurtured future big-leaguers from Roger Craig and Karl Spooner in the 1950s to Darren Holmes and Juan Guzman in the 1980s. He surpassed the previous record of 2,496 minor-league wins held by Bob Coleman in August of 1985, receiving national attention and the written congratulations of President Ronald Reagan and Commissioner Peter Ueberroth.2

Including his playing career as a minor-league catcher-infielder, the Chicago native was part of the Dodgers organization for 47 years. The exceptions were five years in the late 1960s managing in the White Sox organization, 4½ years managing in the Tigers system in the 1950s, and four years of service in the US Army during World War II.3

Despite his wealth of experience, Wasiak was never summoned to a big-league managing or coaching role, perhaps because of a perception — which he acknowledged — that he was not a firm enough disciplinarian.4 His name was mentioned in connection with the vacant Atlanta Braves managing job after the 1977 season, but the position went to Bobby Cox, who had played for Wasiak 15 years earlier.5 It probably didn’t help Wasiak’s case that the Dodgers changed managers very infrequently during his career, and when Walter Alston retired in 1976, Wasiak was coming off a disappointing year at Triple-A Albuquerque6 that saw him bumped down to Class A Lodi for 1977. When Wasiak won his 2,000th game in 1978, the parent club invited him to Dodger Stadium, where he threw out the first ball and watched the game from the owner’s box before returning to his minor-league day job. “I felt like Cinderella after the ball,” he said later. “And then I went back to the salt mines.”7

Wasiak hadn’t publicly announced his retirement when his final team, the Vero Beach Dodgers of the Class A Florida State League, suited up for the last game of the 1986 season. But personal and professional evidence suggested that the time might be close at hand. Wasiak was 66 and had suffered through severe illness. Open-heart surgery cost him part of the 1981 season, and hepatitis sidelined him for almost all of 1982; he returned to manage one game in the latter season to keep his consecutive-years streak alive.8 Wasiak’s 1986 team also slumped badly at the end of the year. Entering August with a 59-48 record, the young Dodgers went 9-22 the rest of the way, slipping all the way to last place in the league’s South Division.9 They brought a 68-69 record into their final game and were playing solely for whatever pride came with not finishing below .500.

Seven members of the 1986 Vero Beach squad played in the major leagues, and four of them appeared on Wasiak’s final lineup card — right fielder Wayne Kirby, center fielder Mike Huff, catcher Luis Lopez, and starting pitcher Juan Guzman.10 In the other dugout, manager Felipe Alou’s West Palm Beach Expos had just nudged out the Fort Lauderdale Yankees to clinch first place in the South Division. Twelve players who suited up for the Expos that year had either already been to “The Show” or were headed there, including future Hall of Famers Larry Walker and Randy Johnson. And three appeared in the game of August 28: Left fielder Larry Walker and starting pitcher Gene Harris were in the starting lineup, while infielder Edgar Cáceres pinch-hit successfully for Harris in the sixth inning.11

Vero Beach got on the board immediately, as Kirby singled in the top of the first inning, stole second, and was driven in by a single off the bat of left fielder Andy Anthony. That 1-0 lead held up until Vero Beach’s pitching staff handed it over in the bottom of the fifth. To start the inning, Expos center fielder Dan Burke walked and second baseman Kent Bachman singled. Guzman fought back to strike out the next two hitters, then issued consecutive walks to third baseman Timothy Thiessen and first baseman Ben Spitale to force in the tying run. Lefty pitcher Doug Cox — making his only relief appearance in 26 games in 1986 — came on and hit Walker to force in another run. Right fielder Andy Lawrence and catcher Tim Arnold drew two more bases-loaded walks to make the score 4-1 before Cox finally closed out the fifth.12

That set the stage for an offensive see-saw in the later innings. Wasiak’s Dodgers rebounded for three runs in the top of the sixth off Harris to tie the game, only to have the Expos push across a run in the bottom half to regain a 5-4 lead. In the top of the seventh, the Dodgers greeted new Expos pitcher Mark Williams with four hits and three more runs. Huff singled, first baseman Domingo Michel and catcher Lopez doubled, and second baseman Kevin Ayers singled to make it 7-5, Vero Beach. The home team promptly fought back with three more runs in the bottom half on a pair of big blows. Right fielder Lawrence led off the inning with a solo shot to left field, and second baseman Bachman — playing for the first time in 14 games — hit a two-run homer, also to left, off newly summoned reliever Bob Jacobsen. That made the game 8-7, West Palm Beach, through seven innings.13

It began to appear that any team that could muster a shutout inning would have a decided advantage, and the Expos’ third pitcher, righty Al Collins, gave them that in the top of the eighth. Wasiak’s last reliever, lefty Jimmy Williams, was not so skilled or fortunate. He yielded two runs on a pair of wild pitches in the bottom half of the eighth — in which he also balked — to hand West Palm Beach a 10-7 lead. Collins weakened a bit in the top of the ninth, allowing Vero Beach one more run, but clinched a 10-8 victory by striking out shortstop Peter Geist for the final out. The Expos proceeded to the Florida State League playoffs, while the Dodgers went home for the offseason with a 68-70 record.14 Williams got the win despite allowing three runs in his only inning. Collins notched a save, Jacobsen took the loss, and 4,435 West Palm Beach fans went home happy.

The August 28 game turned out to be the final game in pro ball for several of the Dodgers, including Andy Anthony, Kevin Ayers, and Bob Jacobsen. The Expos got to play a few more games in the playoffs, but the end of the 1986 season also marked the end of the careers of infielders Timothy Thiessen and Kent Bachman — whose only homer of the year provided the Expos their margin of victory.15

On October 31 Wasiak announced he wouldn’t be returning for a 38th year of managing. He told reporters that he wanted to leave the game on its own terms, rather than be discharged. “I figured this would come at some time and now is as good a time as any,” he said. “It’s time to give somebody else a shot.”16 He died six years later in his adopted home of Mobile, Alabama. Wasiak never reached the major leagues, but he is represented in the collection of the National Baseball Hall of Fame, which requested his cap and lineup card from the 1985 game in which Wasiak broke the record for wins by a minor-league manager.17

Neither Baseball-Reference nor Retrosheet provides box scores of minor-league games, but the August 29, 1986, editions of the Miami Herald and the Palm Beach Post published box scores.

1 Wasiak’s career win total is a matter of some confusion. It was listed as 2,570 in his Associated Press obituary in November 1992. Research supports this total: Wasiak’s record-setting 2,497th win of August 15, 1985, brought Vero Beach’s season record to 62-62, according to Bob Wojnowski, “King Adds Crowning Touch,” Florida Today (Cocoa, Florida), August 16, 1985: C1. Baseball-Reference says Vero Beach finished that year with 67 wins — which means Wasiak won five more games after his record-setter — and then won 68 games in 1986. 2,497 plus five plus 68 is 2,570 wins. Elsewhere on the Internet, Wasiak is sometimes credited with 2,530 wins. His Baseball-Reference page gives a clearly incorrect total of 2,911 wins because it includes the full-season results of each team he managed, regardless of whether or not he managed them for the full season. This discrepancy is most notable in 1982, when Wasiak managed only one game due to ill health but is credited with the Vero Beach Dodgers’ full-season record of 80-53.

8 Bob Fowler, “Wasiak: A Major Figure in History of the Minors,” Orlando (Florida) Sentinel, August 18, 1985: C1. Wasiak’s ill health around this time also forced him to retire from his offseason job as a shipyard mechanic in Mobile, Alabama.

10 The team members who appeared in the bigs but did not play on August 28 were Darren Holmes, Alejandro Pena and Tim Scott.

11 Other members of that year’s West Palm Beach Expos who appeared in the big leagues were Esteban Beltre, John Dopson, Jeff Fischer, Alonzo Powell, Bert Roberge, John Trautwein, Sergio Valdez, and Gary Wayne. As with the Dodgers, not all of these players would have been in uniform with the team on the final day.

15 The Expos were defeated by the St. Petersburg Cardinals, three games to one, for the Florida State League title. “St. Petersburg Wins FSL Title,” Miami Herald, September 6, 1986: 2B.