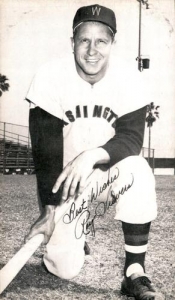 Roy Sievers was the slugging star as the Washington Senators edged the Detroit Tigers 4-3 in a 1957 season-long 17 innings that consumed 4 hours and 24 minutes. His 30th homer of the season, off Detroit’s Al Aber in the game’s final inning, was the margin of victory, and it was the record-tying sixth consecutive game in which Sievers had homered.1 The blast tied Sievers for the league home-run lead with  Ted Williams, and moved him one ahead of the Yankees Mickey Mantle. Not many of the announced crowd of 7,232 (4,601 paid) were around for the finish, having sought cooler surroundings on a Saturday afternoon when the game-time temperature was 98 degrees.

Billy Hoeft (3-6) started the game on the mound for the Tigers and yielded two first-inning runs to the homestanding Senators. After Bob Usher doubled and Sievers walked, an errant pickoff throw to second by Hoeft went into center field and advanced the runners to second and third. They both scored on a single by Art Schult.

The Tigers broke into the scoring column in the sixth inning. After Frank Bolling flied to center field, Al Kaline hit his seventh homer of the season, off Washington starter Russ Kemmerer. In the next inning, Detroit rallied to tie the game and send Kemmerer to the showers. Red Wilson singled, and went to third on a single by Charlie Maxwell, pinch-hitting for third baseman Jim Finigan. Wilson scored when Hoeft helped his cause with a sacrifice fly. Maxwell, who had injured his arm on July 26 against the Yankees, was making his first appearance in eight games. After a single by Harvey Kuenn, Kemmerer’s day was over. Tex Clevenger replaced him and silenced the Tigers bats. He pitched through the ninth inning. Maxwell stayed in the game, replacing Dave Philley in left field, and bonus baby Steve Boros took over at third for the departed Finigan.

Hoeft, who had pitched a complete game in a 15-inning loss against the Yankees the prior Sunday, came out of the game in the eighth inning. With runners on first and third, he was replaced by Duke Maas, who hit pinch-hitter Clint Courtney to load the bases. On the subsequent two plays, grounders to third by Jim Lemon and Sievers, runners were forced out at home. With two out, Detroit manager Jack Tighe summoned Lou Sleater, who retired Julio Becquer on a grounder.

In the bottom of the ninth inning, Milt Bolling doubled and Rocky Bridges was given an intentional pass. Clevenger was due up. Manager Cookie Lavagetto inserted Jerry Snyder as a pinch-hitter and Tigers manager Tighe countered with a pitching change, bringing in right-hander Harry Byrd. Lavagetto’s response was to send up Pete Runnels, a lefty hitter, to face Byrd. Byrd retired Runnels and then Eddie Yost, and the game remained tied at 2-2 through the ninth. In the 10th Bud Byerly took over the mound chores for Washington.

In the 14th inning, Washington mounted a threat. Ed Fitz Gerald led off with a double to right field. Pedro Ramos ran for him and this turned out to be an ill-advised move. Milt Bolling sent a fly ball to deep center field that was corralled by Bill Tuttle. Ramos, mistakenly playing it halfway, scurried back to second and tagged up. He was out easily at third, the tag being applied by Boros. The potential winning run went back to the dugout and Bridges’ fly ball to deep center field was just that, a deep flyball with the bases empty to end the inning.

Washington’s Byerly and Detroit’s Byrd were in command from the 10th through the 15th. In the bottom of the 15th Byerly left the game for a pinch-hitter, Herb Plews, but the Senators came up empty. Dick Hyde came in to pitch for Washington in the 16th inning and the Tigers broke through for a run. Leading off the inning, Boros singled and was sacrificed to second by Wilson. A single by Johnny Groth scored Boros, and Groth took second on the throw home. Tigers manager Tighe, although there was a runner in scoring position, let Byrd bat for himself and the pitcher grounded out. Hyde then retired Ron Samford, stranding Groth at second base.

Byrd, who had taken over the pitching chores in the ninth inning with two on and one out, kept Washington from scoring in the next six innings. His fortunes changed in Washington’s half of the 16th inning. The Senators quickly tied the score. Sievers, who had been hitless in his first six plate appearances (he had one walk), singled and was bunted to second base by Becquer. Al Aber came in to pitch for Detroit, their fifth hurler of the game, and yielded a single to lefty-batting Lou Berberet that went past Tigers first baseman Ray Boone. Sievers scored the tying run. The Senators loaded the bases, but Aber worked his way out of the jam, striking out Eddie Yost for the third out of the inning, and the game moved into the 17th inning.

Having removed Hyde for pinch-hitter Jerry Schoonmaker in the 16th, Lavagetto called on right-handed side-arm hurler Ted Abernathy to pitch the 17th inning. He quickly dispensed of the Tigers. Aber returned to the mound for Detroit and retired the first two Washington batters. Faye Throneberry flied out and Jim Lemon, who didn’t get the ball out of the infield all day, grounded out. Sievers, batting for the eighth time in the marathon, looked at ball one then homered for the 4-3 win.

Aber took the loss, his record falling to 2-3. Later in August, he was put on waivers and claimed by Kansas City, with whom he made his last three major-league appearances in September.

With the win, the Senators, for the time being, remained out of the cellar. Over the season, they would continue to fight the Kansas City Athletics for the dubious honor of being the worst team in the league. At the end of the season Washington was once again first in war, first in peace, and last in the American League, despite a managerial change 20 games into the season when Lavagetto replaced Chuck Dressen. They were five games behind the seventh-place A’s and 43 games, eight seasons, and 1,100 miles removed from first place.

The loss put the Tigers one game below .500. They were in fourth place, 17 games behind the league-leading Yankees. They remained in fourth place for the balance of a very disappointing season, finishing with a 78-76 record.

Charlie Maxwell, after pinch-hitting in the seventh inning and being a part of the game-tying rally, stayed in the game as the left fielder. He singled in the ninth inning but, still nursing a bad arm, was replaced by pinch-runner Johnny Groth. The injury was unfortunate for the Tigers as Maxwell had enjoyed success at Griffith Stadium, hitting three homers there in 1957. Before Kaline’s sixth-inning blast, those three had constituted all of Detroit’s homer power in Washington that season.

Detroit’s Harvey Kuenn was given the rest of the game off after popping out in the ninth inning. He had singled in the fifth and seventh innings but his batting average was only .255, well off the pace of his prior four seasons. He was replaced at shortstop by Ron Samford. Manager Jack Tighe felt that Kuenn’s range at shortstop was limited and had, for a brief time in July, moved Kuenn to third base. The following season, Kuenn was moved to center field.

Kuenn had been up early on August 3 to visit young Christopher Mills at Montgomery County General Hospital in Olney, Maryland, 20 miles north of Washington. The Detroit area lad had been visiting relatives in Maryland when he lost his right leg in a tractor accident. The boy’s favorite players, Kuenn and Jim Bunning, came by and brightened his day.

Sievers not only tied for the league lead in homers on August 3, but also set a new home-run record for the Senators, bettering his mark of 29, set the prior season. He was on a home-run binge, having homered in 10 of 17 games. His home-run streak would end at six consecutive games. This 1957 season was his best in the majors. He batted .301 and led the American League in homers (42) RBIs (114), extra-base hits (70), and total bases (331). He finished third in MVP balloting although his team, as so often was the case in those years, finished last in the league.

In addition to Baseball-Reference.com, the author used the following:

1 By homering in his sixth consecutive game, Sievers tied for the American League record shared by Lou Gehrig and Ken Williams.