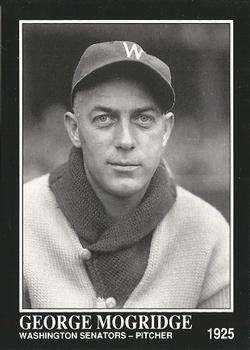 When the Washington Senators obtained left-handed pitcher George Mogridge from the New York Yankees on December 31, 1920, Washington Star sportswriter Denman Thompson praised the Senators for acquiring a pitcher of considerable class; he also warned that the former Yankee was an inconsistent winner.1 Perhaps inspired by his new surroundings – or motivated to get even with both the Yankees for trading him and manager Miller Huggins for personal differences – Mogridge got off to a good start in Washington by winning 10 of his first 15 decisions. The 32-year-old pitcher lost his next three decisions but then bounced back to win his next two, giving him a 12-8 record before he faced the American League-leading Cleveland Indians at American League Park on August 5.

The Senators were happy to have Mogridge but afraid they were going to lose him, because the pitcher was threatening a career change. Rumors had him opting for a bigger payday as office manager of his brother’s prosperous fruit-growing business in southern Michigan, and it was said that his brother was pitching him to come on board.2

Modridge opposed a Cleveland team holding just a half-game lead over second-place Yankees. The defending World Series champions had been on top or tied for first in the American League since May 18 but were now riding a losing streak that the Senators had extended to four by taking a pair of 3-1 games the day before.

While the Indians were in a slump, the surprising Senators were riding their longest winning streak since 1912. The doubleheader sweep on August 4 made it 10 wins in a row, continuing what had been a strange season for the third-place Washingtonians.

Under rookie manager George McBride, the Senators established themselves as a dark horse in the pennant race with a 34-26 record on June 18, putting them just three games from first. But they cooled off over the next five weeks, dashing any pennant hopes; eight losses in nine games from July 14 to 23 even darkened the prospect of a winning season.

The Senators then surprised their followers by reeling off 10 straight wins, although not everything went according to plan during the win streak. On July 27, as the Senators prepared to play the White Sox, McBride, standing in the infield during his team’s pregame warmup, was accidentally hit in the face by outfielder Earl Smith’s errant throw. McBride was carted off the field on a stretcher and was reported to be more seriously injured than thought, for the mishap caused dizziness and other ill effects that would keep him in bed for a few weeks.

The winning streak had energized Washington’s baseball fandom, but Washington Post sportswriter John A. Dugan warned his readers not to get too exhilarated, cautioning that it was good to be excited, “but enthusiastic fans who are laboring under the impression that the club still has a chance to win the old bunting should drop their enthusiasm, immediately.”3

With McBride still too ill to be present, 34-year-old veteran outfielder Clyde Milan filled in as manager and responded to his temporary role by going 18-for-36 at the plate during the winning streak. He remained at the helm as Washington aimed for 11 wins in a row on August 5.

In the top of the first, Cleveland put two men on base with two outs, but Mogridge managed to get the inning’s last out before Cleveland could push one over the plate.

The Senators wasted no time in the bottom of the inning against Cleveland starting pitcher Jim Bagby Sr., a 31-game winner in 1920 but a disappointing 11-9 so far in 1921. Leadoff hitter and first baseman Joe Judge, one of the few Washington starters who was slumping during the 10-game winning streak, began the inning with a single to right field, and Milan followed with a walk to put two men on base with no outs.

Sam Rice, hitting .342 with nine RBIs in the last 10 games, drove a double to center field to send Judge home and Milan to third base. Bing Miller’s groundout drove in Milan for a 2-0 Washington advantage. When Bagby walked the next batter to load the bases, Indians manager Tris Speaker decided that today was not going to be this pitcher’s day. A pitching change was made and it proved to be a good move. The new pitcher, Allen Sothoron, induced Howie Shanks to ground into an inning-ending double play.

After Mogridge retired the visitors in order in the next two innings, Judge began the Washington third by hitting a second single. He advanced to second on Milan’s groundout. Rice’s second double of the day sent him home for a 3-0 Washington lead.

The Senators added another tally to make it 4-0 in the fifth. Judge reached base for the third time with a base on balls, moved up a base on a wild pitch, and scored when the hot-hitting Sam Rice produced his third hit of the day.

In the top of the sixth, Speaker executed a bunt single for his third hit of the game, and right fielder Smoky Joe Wood singled. When Larry Gardner and Joe Sewell followed with groundouts, they were good enough to move Speaker to third and then home for the American League leaders’ first run. Cleveland was still in business with runners on first and third, but Mogridge ended the frame by inducing George Burns to hit one into the air to center fielder Sam Rice for the third out of the inning.

Mogridge finished off Cleveland by retiring the next nine batters in order, closing out the Senators’ 11th straight win. He had allowed just one run on six hits and did not yield a single walk in earning his 13th win of the season.

The Senators were now 58-48, just seven games from the American League penthouse. (Their franchise record of 17 consecutive wins was still six more wins away.) Mogridge’s win had shuffled the American League standings. The Yankees, who beat the Tigers that day, moved into first; the Indians were in second for the first time since May 16.

But Washington’s winning streak and the American League’s changed leaderboard would not last. The next day the Clevelanders scored three in the top of the first and hung on for a 3-1 win, snapping the Senators’ winning streak at 11. The win along with a Yankees loss put Cleveland back on top.