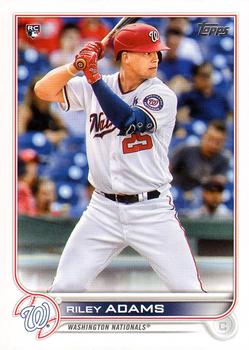 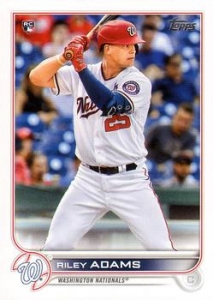 Atlanta Braves fans, 38,300 of them, packed Truist Park for the middle game of a three-game weekend series against the Washington Nationals. Atlanta (56-55) was only 1½ games behind the NL East-leading Philadelphia Phillies and New York Mets.

The Nationals came in with a 49-61 record, eight games back in the division. They had lost 23 of their last 32 games since reaching their high-water mark of 40-38 on June 30.

More recently, they had lost six of the seven games since the July 30 trade deadline, which was not surprising given whom they had traded away. Just before the deadline, the Nationals had made six trades involving veterans.

One deal sent two significant members of Washington’s 2019 World Series team, Max Scherzer and Trea Turner, to the Los Angeles Dodgers for a package of prospects. The return from Los Angeles had included 23-year-old pitcher Josiah Gray, who was starting against the Braves.

Another newcomer, 25-year-old catcher Riley Adams, was behind the plate; Adams had come from the Toronto Blue Jays for closer Brad Hand.

The game’s starting pitchers and their catchers couldn’t have been more different. This was 37-year-old Charlie Morton’s 282nd major-league game. Morton had made his big-league debut in 2008, when Gray was only 10 years old. For Gray (4.85 ERA) it was only his fourth major-league game and third start.

Morton was throwing to 36-year-old Stephen Vogt, a catcher with nine years of experience who had joined the Braves on July 16 in one of six July trades that brought veterans to Atlanta.1 Adams, by contrast, had appeared in his first major-league game slightly less than two months earlier with the Blue Jays; this was his 15th career game, third with the Nationals. While Adams had never faced Atlanta, Vogt had already played against the Nationals four times in 2021.2 On paper, at least, Atlanta seemed to have the advantage.

Gray’s first inning did not go as smoothly. Jorge Soler, another of the Braves’ veteran acquisitions, hit a one-out homer into the center-field stands to put Atlanta on the board early. Gray limited the damage to that one run – he got Freddie Freeman to fly out and struck out Austin Riley.

As the top of the second got underway, Ehire Adrianza entered the game for Atlanta at first to replace Freeman, who left with “an upper respiratory situation.”3 Josh Bell opened the inning with a double down the third-base line for the Nationals’ first hit, but that was all Morton allowed.

Gray struck out the side in the bottom of the second.

Morton had no trouble with the bottom of the Nationals order in the top of the third. Adams grounded out, Gray fanned, and leadoff man Andrew Stevenson hit a foul popout on the first pitch.

Gray continued his run of strikeouts in the third, but it led to Atlanta’s scoring another run. Vogt was the Braves’ fifth consecutive strikeout victim, but he reached first on a wild pitch, took second when Morton laid down a perfect bunt up the first-base line, and scored on Ozzie Albies’ single to center. Albies made it to second when Stevenson overran the ball, then threw it home anyway. Gray walked Soler to put two on but struck out Adrianza and Riley to quash the potential rally. Atlanta led, 2-0.

Morton faced the minimum in the fourth thanks to a double play.

Swanson opened the home half of the fourth with a double that dropped in just inside the third-base line. With Adam Duvall and Joc Pederson, two more July arrivals, due up, Atlanta hoped to expand its lead, but Gray struck out Duvall and Pederson flied out. After an intentional walk to Vogt, Morton flied out to right on the first pitch, and it remained a two-run deficit for the Nationals.

Morton collected two more strikeouts in a quick top of the fifth.

After Albies struck out to lead off the fifth, Soler reached base for the third time on a 53-mph grounder just inside the first-base line. Gray again held the line, as Adrianza struck out and Riley flied out. Gray’s day was done at 82 pitches, 10 strikeouts, four hits, two walks, and two runs (one earned). But since his teammates had failed to provide him any run support, he was on the hook for a loss – barring a Nationals comeback.

Morton finished his outing in top of the sixth, getting himself into, and out of, a jam. He walked Adams and pinch-hitter4 Juan Soto. Stevenson struck out, but Alcides Escobar singled to load the bases. Morton finished with a flourish, striking out Hernández and Bell, then leaving the mound to a standing ovation from the Atlanta fans. Atlanta fans could be forgiven some overconfidence at this point in the game. The Nationals had the worst bullpen in the major leagues in 20215 so add-on runs were a definite possibility – and the Nationals hadn’t managed to score yet.

Mason Thompson, another new National acquired at the trade deadline,6 took over the pitching in the bottom of the sixth. It was only his seventh major-league game, but he turned in a fine performance, striking out Dansby Swanson and Duvall before allowing a single to Pederson. Vogt hit a comebacker that bounced off Thompson, but the pitcher recovered and threw to first for the out.

Neither team scored in the seventh or eighth, although the Nationals got a baserunner to third in the eighth.

Will Smith took the mound for the top of the ninth, sporting a record of 22 saves in 24 opportunities.7 The Nationals had not scored in eight innings and were playing with a diminished arsenal after trading Turner, headed for the NL batting title, and Kyle Schwarber, who had earned NL Player of the Month honors with a 16-homer spree in June.

But they had enough left for a rally. Bell worked the count full and walked. Pinch-hitter Ryan Zimmerman connected on the first pitch and doubled down the left-field line with Bell sliding safely into third.

After Carter Kieboom flied out, Luis Garcia’s groundout back to Smith scored Bell, cutting the deficit to 2-1 but leaving the Braves one out from victory.

That brought up Adams, 0-for-7 in his Nationals career. He liked the first pitch he saw and skied8 it into the second deck in left for two-run homer. The Nationals had a 3-2 lead.

Adams rounded the bases for the first time in the majors, grinning from ear to ear. The ballpark fell silent – except for the Nationals’ dugout, which didn’t bother with the “first home run silent treatment.”

The Nationals’ trade-depleted offense had put them ahead, but now their bullpen, also short-handed after July’s deals, had to preserve the lead. Hand had 21 of Washington’s 23 saves before the trading flurry, but he was now a Blue Jay.

Kyle Finnegan (3.07 ERA) had recorded two saves in late July, after the trading flurry, then allowed four unearned runs in the ninth to blow the save in his last outing, a 7-6 loss to Philadelphia on August 5. Manager Davey Martinez went back to Finnegan for the save in this one.

After Finnegan’s fifth pitch, Pederson asked the umpire for time, but it wasn’t granted. He took a protective swing and the ball was caught by left fielder Hernández on the foul side of the third base line for the first out. Braves manager Brian Snitker came out to argue with home-plate umpire Dan Iassogna, but a decision not to allow time is not a reviewable decision. Of course, the crowd was booing loudly in the background.

Vogt flied out to Hernández as well, but in fair territory. Pinch-hitter Guillermo Heredia grounded toward second – Finnegan covered first to receive the throw and the game was over.

The Nationals TV broadcasters attempted to interview Adams after the game, but his teammates doused him with the contents of the Gatorade cooler and shorted out the microphone. He did get the home-run ball back – the clubhouse staff had it for him after the game.9

Sparked by Gray’s pitching and Adams’s clutch home run, the Nationals had slowed their second-half decline for one night, but they continued to sink in the standings and finished last in the division. It was a disappointing season for Nationals fans, but in this game they had a glimpse of what their new players could do. Gray finished the year with a 2-2 record and a 5.71 ERA for the Nationals. Adams batted .268 (with 2 home runs) in 35 games with the Nationals.

As for the Braves, they celebrated the 150th year of their franchise by finishing first for the fourth straight season – and won the World Series in six games over the Houston Astros, making them the second NL East team in three seasons to win the World Series, following the 2019 Nationals.

In addition to the Sources cited in the Notes, the author consulted the Baseball-Reference.com and Retrosheet.org websites for pertinent material and the box scores noted below, and viewed the Nationals’ broadcast of the game on MLB.tv.

1 He was traded from the Diamondbacks for minor-league first baseman Mason Berne.

2 He had faced them in April and May with the Diamondbacks and the night before in the Braves’ 8-4 win.

3 With the COVID-19 pandemic still in force, and Freeman’s personal experience with COVID-19 in 2020, everyone assumed the worst. Aria Gerson, “‘Please Don’t Take Me’: Braves’ Freddie Freeman Details Harrowing Battle with COVID-19,” usatoday.com, July 18, 2020. Freeman did not have to go on the IL, and was back playing first base the next night, although he entered as a pinch-hitter in the seventh. https://www.usatoday.com/story/sports/mlb/braves/2020/07/18/braves-freddie-freeman-describes-covid-battle-please-dont-take-me/5465904002/. Retrieved April 5, 2022.

4 Soto had a knee contusion and had been held out of the starting lineup. Mark Zuckerman, “Soto Out of Lineup Again, MRI Is Negative,” masn.com, August 7, 2021. https://www.masnsports.com/nationals-pastime/2021/08/soto-out-of-lineup-again-mri-on-knee-is-negative.html. Retrieved March 30, 2022.

6 He was acquired from the San Diego Padres in return for closer Daniel Hudson.

7 He finished the year with 37 saves and only six blown saves while leading the major leagues with 60 games finished.