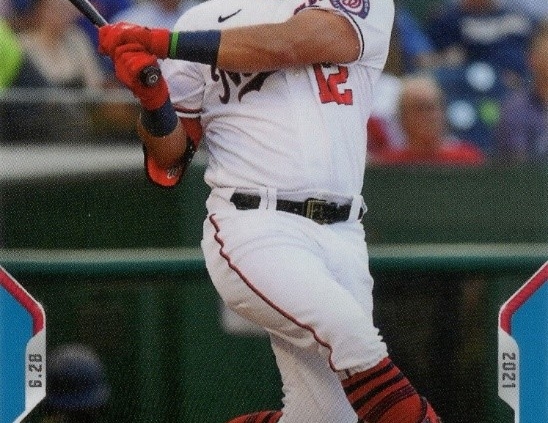 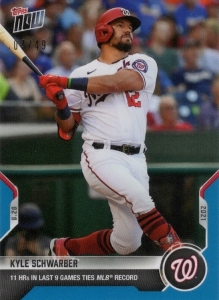 Hall of Famer Johnny Mize could hit a baseball. Author Joe Posnanski suggests of Mize, “He was Lou Gehrig good. He was Stan Musial good. He was Mel Ott good, Frank Robinson good, Joe DiMaggio good, Albert Pujols good.”1 So good, in fact, that in 1947 with the New York Giants Mize became the only major leaguer to hit more than 50 home runs and strike out fewer than 50 times. To be more precise, 51 home runs and 42 strikeouts.

When Mize wrote his book How to Hit, published in 1953, Tommy Henrich noted in the foreword that “it can serve well as a refresher course for a lot of major leaguers.”2 A “Don’t Forget” chapter provided the reader with a long list of valuable lessons. For example, “Don’t forget to stand in there against any pitcher. Don’t forget to keep saying you’re going to get a hit. Don’t forget to stop guessing what the pitcher will throw when you have a two-strike count on you. Look for the fastball.”3

Years later, another left-handed batter, Kyle Schwarber, certainly didn’t forget Mize’s timeless lessons on how to hit. In fact, in June 2021, Schwarber hit 16 home runs and was named National League Player of the Month.4 Indeed, for an 18-day stretch during that month, Schwarber was the definition of locked in, no matter the pitch count.5 Let’s not get too far ahead of ourselves as we recall a ballgame on a hot summer night in late June, a historic month for one ballplayer.

When the Chicago Cubs nontendered Schwarber after he batted .188 for the 2020 shortened season, the Nationals signed the 28-year-old slugger to a one-year contract.6 Schwarber began the season in the middle of the lineup and was having what appeared to be a rather mundane season through June 11—.218, 9 home runs, 26 RBIs.

The Nationals were 8½ games behind the first-place New York Mets when manager Dave Martinez inserted Schwarber into the leadoff position for the first game of a doubleheader on June 12 against the San Francisco Giants.7 Schwarber hit Kevin Gausman’s second-pitch fastball for a home run in the first inning—upper deck, right field, 426 feet away at Nationals Park. It was his first homer in June. Schwarber batted cleanup in the second game, but spent the remainder of the month at leadoff.

There was no stopping Schwarber after that—five leadoff homers, 13 total in his next 16 games—as the Nationals, now 4½ games behind, were hosting the first-place Mets in a makeup game on June 28. Schwarber had already tied a major-league record with five home runs in two consecutive games a week earlier against the Mets.8

At the same time, Nationals starter Paolo Espino (1-2, 2.35 ERA) was building a compelling story of his own. The 34-year-old Espino, a 2006 draft choice of the Cleveland Indians and a veteran of five professional organizations and 342 minor-league appearances, had earned his first major-league win on June 16 with five scoreless innings in a start against the Pittsburgh Pirates.9 Seven days later, he earned his first save in a wild 13-12 win over the Philadelphia Phillies. Tonight’s third start of the season came because of another injury to the Nationals pitching staff, a left oblique strain for Erick Fedde.10

Meanwhile, Jerad Eickhoff started for the Mets for only the second time after spending parts of five earlier seasons (2015-2019) with the Philadelphia Phillies. A highlight of his 2015 rookie season came on this very mound—his only previous victory over the Nationals with a career-high 10 strikeouts, including three of Bryce Harper.

In the first inning, Schwarber hit Eickhoff’s second pitch, a high fastball, down the right-field line to a spot where the ball rarely travels—third deck, Section 236, 439 feet. It was a monster shot by any definition.11 On the very next pitch, an elevated changeup by Eickhoff, Trea Turner hit his 12th home run of the season, over the visiting bullpen in left field.12

The second inning brought recently recalled Gerardo Parra, back with Washington after a season in Japan, to the plate to lead off. Synonymous with “Baby Shark” walk-up music and the Nationals’ championship run in 2019, Parra delivered a home run down the right-field line.13 No doubt that the ball was flying and the Nationals’ lead was 3-0.

Meanwhile, Espino was pitching effectively, scattering two singles over the first three innings. As he pitched through the Mets batting order a second time, he faced his most serious challenge in the fourth. After Francisco Lindor lined out to deep right to open the inning, Dominic Smith and Pete Alonso singled, putting Smith in scoring position at second. Espino retired Billy McKinney on a fly ball down the left-field line and Kevin Pillar on a pop fly to end that threat.

After Espino yielded a leadoff single to Luis Guillorme in the fifth but otherwise retired the side, his pitching line was exactly what manager Dave Martinez had wanted—no runs on five scattered hits and no walks. But Espino had never pitched three times through a batting order as a starter and tonight was no different. So despite a low pitch count (67) through five innings, his work for the evening was complete. But Kyle Schwarber’s was not.

To lead off the bottom of the fifth, Schwarber hit Eickhoff’s 3-and-1-count slider into the right-field seats, 409 feet away, for his second home run of the night and his 15th in June. As Bob Carpenter, television play-by-play voice of the Nationals, was repeatedly uttering throughout June, “See you later!”14

After Nationals reliever Sam Clay pitched a scoreless sixth inning, the Nationals added another run for a 5-0 lead. With one out, Yan Gomes doubled to right-center off Eickhoff and scored on Starlin Castro’s line-drive single to left.

But there was trouble ahead for the Nationals’ bullpen. Clay got two outs in the seventh inning but was replaced by Wander Suero with Guillorme, who had singled, on second. Suero hit pinch-hitter José Peraza before yielding a run-scoring single to Jeff McNeil for the first Mets run.

Suero came out to pitch the eighth, but his night was over after he yielded a leadoff single to Smith. It was Justin Miller’s turn and Alonso deposited the first pitch into the left-field stands for his 12th home run, cutting the Nationals’ lead to 5-3. McKinney followed with a solo homer before Miller struck out Pillar, but Martinez had closer Brad Hand ready to come into the game to get the final two outs of the inning.15

With the lead cut to 5-4, a double-switch move bringing Ryan Zimmerman into the game with Hand proved prescient in the bottom of the eighth. Reliever Miguel Castro walked Parra with one out before Starlin Castro reached on an error, bringing up Zimmerman, at age 36 in his 16th season with the Nationals.

The Z Man, as he is often fondly called, hit Castro’s first pitch, a 100-mph sinker to deep center for his ninth home run of the season and another curtain call.16 Nationals 8, Mets 4. Perhaps Nationals fans were “disappointed” when Schwarber only singled as the next batter, but his three hits and Hand’s 17th save to close out the ninth gave the Nationals the win. They were finally back at .500 baseball, 38-38.

The back of the illustrated baseball card tells us that Schwarber’s two home runs gave him 11 in the last nine games to tie a major-league record for any nine-game span, previously set by Washington Senators icon Frank Howard in 1968.17 The record was broken the very next night—12 home runs in a 10-game stretch—when Schwarber hit Tampa Bay veteran Rich Hill’s first-pitch fastball in the bottom of the first for his 16th homer of the month.18

There was more in store for Schwarber before season’s end. He was named an All-Star but a hamstring injury in early July kept him out of any lineup for six weeks. The Nationals lost 11 of their first 13 games in July, bringing the specter of the trading deadline into sharper focus. At the end of July, Schwarber was traded to the Boston Red Sox for minor-league pitcher Aldo Ramirez, helping the Red Sox to reach postseason play. But for Schwarber, the 2021 season will be remembered for a stretch of less than three weeks, when he was the hottest hitter on the planet, the definition of locked in.

Barry Svrluga wrote about the experience of player and fan in The Grind. “A baseball season is a shared experience, an experience broken into tiny sections—a pitch, an at-bat, a rally, an inning, a game, a series, a winning streak, a slump, a month, a summer. The fan sees all of those elements, shares in them. … Watch the game enough, and its patterns become familiar and unmistakable, even as there’s no way to know what will happen on the next pitch or the next night.”19

The experiences of this fan at Nationals Park in the 2021 season are captured in two SABR Games Project essays. The possibility of Mad Max’s last appearance, the drama of a comeback walk-off victory and the shock of a trade-deadline makeover of the Nationals roster are told in another story.20 As for what lies ahead for Nationals fans, we’ll need pitching and patience, and plenty of both.

This essay was fact-checked by Bruce Slutsky and copyedited by Len Levin.

The author accessed Retrosheet.org (retrosheet.org/boxesetc/2021/B06280WAS2021.htm) and Baseball-Reference.com (baseball-reference.com/boxes/WAS/WAS202106280.shtml) for box scores/play-by-play and other data. The baseball card commemorating this game was purchased from the Topps Company.

5 “For a player to concentrate and be focused, such as … a batter whose swing is so directed as to hit the pitch hard and into a desired area consistently.” Paul Dickson, The Dickson Baseball Dictionary, 3rd Edition (New York: W.W. Norton & Company, 2009), 513. Schwarber hit six home runs when ahead in the pitch count, four home runs when even, and six home runs when behind. Five of his home runs came with two strikes in the count.

6 Jesse Dougherty, “Slugger Kyle Schwarber Is Headed to Washington on a One-Year Deal with the Nationals,” WashingtonPost.com, January 9, 2021, washingtonpost.com/sports/2021/01/09/washington-nationals-sign-kyle-schwarber/.

11 Dickson, 553. “A home run of major proportions; a tremendous home run, high into the upper stands or out of the ballpark.”

15 It was an ignominious ending to Miller’s tenure with the Nationals. He was put on waivers after the game and claimed by the Cardinals in early July.