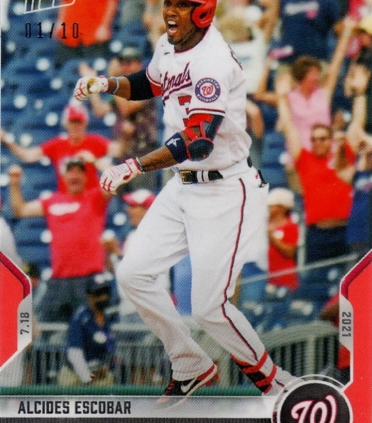 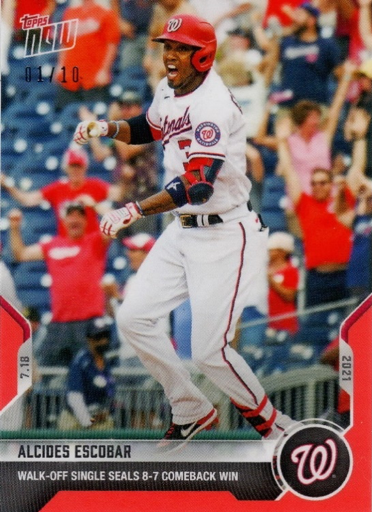 Prospect: “A minor-league player who appears to have enough potential and youth to eventually establish a productive major-league career.” – The Dickson Baseball Dictionary1

The season’s calendar is marked by those events that spark every baseball fan’s own sense of why they love the game. Perhaps it’s the anticipation when pitchers and catchers report to spring training. Maybe it’s knowing that everything counts for their favorite team beginning on Opening Day. There’s time to pause and celebrate in midseason when the All-Star Game features baseball’s best players. When the grind of the regular season is over, let the postseason begin.

No date on the calendar quite matches the seemingly chaotic end-of-July trading deadline, which is even worthy of its own definition in The Dickson Baseball Dictionary.2 The speculation by baseball pundits begins early in the season and builds to a dramatic conclusion. Some transactions are completed at the very last moment, 4:00 P.M. EDT on July 30 for the 2021 season.

With two months to go in the season, who are the contenders and who are the pretenders? Which teams desire that one pitcher or one hitter who could help their two-month drive to postseason baseball? Which teams are in desperate need of rebuilding a major-league roster or restocking a depleted farm system? Which players will become free agents at season’s end and which teams can’t seem to afford the contracts of their own outstanding stars? The answers to these questions and others will tell us who the buyers will be and who the sellers will be at the trading deadline. Invariably the preponderance of trades at the deadline involve both experienced major leaguers and younger prospects. At that, surprises might still be in store.

As the 2021 calendar turned to July, the Washington Nationals and the San Diego Padres were in very similar positions in the National League standings. The Padres (49-33), winners of 11 of their previous 13 games, were in third place in the NL West, 2½ games behind the first-place Giants. The Nationals (40-38), winners of 14 of their last 17 games, were in second place in the NL East, 2½ games behind the first-place Mets. Would both teams be buyers at the trading deadline?

July, however, was cruel to both teams. As the Nationals readied on this Sunday afternoon to complete a three-game home series against the Padres, their July record stood at 2-11. Both victories came against the Padres in a four-game split earlier in the month in San Diego. A hamstring injury to Kyle Schwarber, the National League Player of the Month in June, and shaky pitching had taken their toll.3 Since July 1, Nationals starting pitchers had the worst ERA in the National League.4

Meanwhile, the Padres, who had occupied first place in their division for 10 days in late May, were 6-7 over the same period with four of those wins coming against the Nationals. The Padres remained in third place but had slipped further behind the first-place Giants. A postseason wild-card spot was still possible.

Before the scheduled Sunday game could begin, matching the Padres’ Joe Musgrove (5-7, 2.93 ERA) and the Nationals’ Max Scherzer (7-4, 2.66 ERA), the two teams completed a game suspended on Saturday night after a shooting in the vicinity of Nationals Park.5 The Padres won 10-4, their second blowout in a row. They had scored in eight of nine innings in Friday night’s 24-8 win.

Scherzer slowed San Diego’s offense. Over the first three innings, he struck out five, including the side in the first inning. Two walks in the second inning were his only hiccups. Meanwhile, Musgrove, who on April 9 had pitched the first no-hitter in the Padres’ 53-season history, began his own undoing in the third inning when he hit Trea Turner on the batting helmet.

Juan Soto doubled to left, advancing Turner to third, from where he scored on Josh Bell’s weak grounder to first. When Josh Harrison doubled to left and Andrew Stevenson singled to center, the Nationals had a 3-0 lead. After Stevenson stole second and Musgrove hit his second batter of the inning, Gerardo Parra, the Nationals added another run on Tres Barrera’s single to center.

The Padres were quick to respond against Scherzer in a four-pitch span in the fourth inning, when Manny Machado and Tommy Pham hit consecutive one-out singles and Eric Hosmer homered to cut the lead to one run, 4-3. Just as quickly, Scherzer returned to form through the sixth inning, allowing only a walk and striking out both Machado and Fernando Tatis Jr.

The Nationals tried hard, but unsuccessfully, to add to their one-run lead in the fifth inning against Musgrove and in the sixth inning against reliever and former National Craig Stammen, stranding five runners in the process. With San Diego still within striking distance, Jurickson Profar hit Scherzer’s second pitch in the seventh to the upper deck in right field to tie the score at 4-4.

To begin the eighth inning, Daniel Hudson relieved Scherzer and Jordy Mercer, an earlier pinch-hitter, moved to third base. Tatis, the first batter, reached on Mercer’s groundball error, and Machado’s 16th home run of the season gave the Padres their first lead of the game, 6-4. This time the Nationals had an answer in their half of the eighth. Alcides Escobar homered off Padres reliever Emilio Pagán. Turner followed with a double and Soto’s 14th home run, down the left-field line, gave the Nationals a 7-6 lead.

Nationals closer Brad Hand took the mound in the ninth. He hadn’t pitched in nearly two weeks since gaining his 19th save in San Diego on July 5. The Nationals’ six-game losing streak and the All-Star break left no room for closing opportunities. With one out, Hand walked Victor Caratini, who was replaced by pinch-runner Jorge Mateo. As Hand struck out Ha-Seong Kim, Mateo stole second. His subsequent steal of third was followed by Trent Grisham’s two-out single to left. Score tied 7-7. Two walks followed to load the bases, but Machado looked at a called third strike to end the threat.

The drama of a walk-off in the ninth was about to unfold! Padres closer Mark Melancon took the mound with 27 saves to his credit.6 With one out, Barrera singled to left for his second hit of the game and Melancon hit Victor Robles on a full count to put runners on first and second. Up came Escobar with one thing in mind, get Barrera in from second with the winning run.

Escobar had last played in the major leagues with Kansas City Royals nearly three years earlier. A rash of injuries prompted Nationals general manager Mike Rizzo to purchase Escobar from the Royals in early July. On a 1-and-2 count, Escobar fouled off a curve, then hit Melancon’s cutter just to the right of dead center off Grisham’s glove, scoring Barrera for the 8-7 victory.7 For the moment at Nationals Park, the excitement of a walk-off win suppressed the anxieties of local fans about the looming trade deadline and fading postseason hopes for the Nationals. Were they about to become sellers?

As the deadline hour approached the strategies of both teams became clearer. They even completed a last-minute deal with each other. The Nationals sent Hudson and his expiring contract to the Padres, seeking bullpen help, in exchange for pitcher Mason Thompson and minor-league infielder Jordy Barley. Washington’s blockbuster deal, however, sent Scherzer and Turner to the Los Angeles Dodgers for top prospects, pitcher Josiah Gray and catcher Kiebert Ruiz, as well as Gerardo Carillo and Donovan Casey.

As the trading deadline passed, the Nationals’ major-league roster was now without Hudson, Schwarber, Scherzer, and Hand as well as Yan Gomes, Josh Harrison, and Jon Lester.8 Less than two years removed from a World Series triumph, Rizzo’s assessment was direct and clear, “We got everything out of this group we could have gotten. … There’s no shame in having to take a step back, refocus, reboot and start the process again.”9

What did the trading deadline “scorecard” look like, recognizing that it often takes years to appreciate a trade’s full value? The last two months of the 2021 regular season brought Nationals box scores that more often than not included names like Gray, Ruiz, and Thompson, as well as catcher Riley Adams and outfielder Lane Thomas. The other seven prospects obtained by the Nationals to help restock a depleted farm system all landed on the updated Nationals Top 30 Prospects list posted by MLB.10 The Nationals finished their season with a 65-97 record, 23½ games behind the division-winning Atlanta Braves.11 Meanwhile, Schwarber, Turner, and Scherzer helped their new teams advance to postseason play.12

What might Nationals fans anticipate for the 2022 season? In late November, Max Scherzer signed a three-year contract with the New York Mets worth $130 million, the highest average annual salary in major-league history.13 How might fans react the next time Max took the mound at Nationals Park in that road uniform? That’s material for another story!

As the author watched the game from Section 208 with a friend, a glance at the Nationals’ schedule amid the looming trade deadline suggested that we were watching Max Scherzer pitch in the home uniform for the last time. Think about some of his classic performances since he became a Washington National in 2015. There were two no-hitters, one nearly a perfect game, a strikeout record for a single game, and a strikeout milestone for a season, and don’t forget Max pitching with a broken nose.14

Of course, there were many more such performances, including five solid innings in the Nationals’ Game Seven victory in the 2019 World Series, and don’t forget two National League Cy Young Awards in 2016 and 2017.15 The essence of Max Scherzer as a competitive spirit still thrived on the confrontation that defines baseball – pitcher versus batter.

The author accessed Retrosheet.org (retrosheet.org/boxesetc/2021/B07180WAS2021.htm) and Baseball-Reference.com (baseball-reference.com/boxes/WAS/WAS202107180.shtml) for box scores/play-by-play and other data. The baseball card commemorating this game was purchased from the Topps Company.

2 Dickson, 887. “The last moment at which two teams are allowed to trade players …”

3 Schwarber won the award for hitting 16 home runs in an 18-game span in June. He severely injured his hamstring on July 2 in a 10-5 loss to the Los Angeles Dodgers and did not play another game for the Nationals before being traded to the Boston Red Sox on July 29 for minor-league pitcher Aldo Ramirez.

6 Melancon himself was a 2016 trade-deadline acquisition by the Nationals, who obtained him from the Pittsburgh Pirates in exchange for pitchers Taylor Hearn and Felipe Vázquez. Melancon saved 17 games in the last two months of that regular season before the Nationals lost a postseason NLDS to the Dodgers in five games. Melancon saved Game Two of that series.

8 The transactions not previously referenced: Gomes and Harrison were traded to the Oakland Athletics for Richard Guasch, Drew Millas and Seth Shuman. Lester was traded to the St. Louis Cardinals for Lane Thomas. Hand was traded to the Toronto Blue Jays for Riley Adams.

9 Chelsea Janes, “At a Busy MLB Trade Deadline, Contenders Either Ponied Up or Got Left Behind,” WashingtonPost.com, July 30, 2021, washingtonpost.com/sports/2021/07/30/mlb-trade-deadline-wrap/.

11 The Padres fell rapidly out of a postseason wild-card berth by winning only 12 of their last 46 games of the season. They finished with a 79-83 record, 28 games behind the division-winning San Francisco Giants.

12 Schwarber batted .291 in 41 games for Boston, accumulating 7 home runs and 18 RBIs. Turner (.328) finished first in the National League batting race ahead of Soto (.313). The Dodgers won all 11 games in which Scherzer took the mound in August and September. His season’s pitching line – 15-4, 2.46 ERA, 236 strikeouts in 179⅓ innings – made him a contender for the 2021 National League Cy Young Award, won by Milwaukee Brewers pitcher Corbin Burnes. Scherzer finished third in the voting behind Philadelphia Phillies pitcher Zack Wheeler.