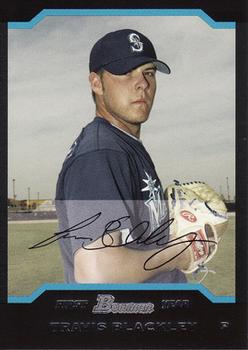 After Travis Blackley won his last seven decisions for the Triple-A Tacoma Rainiers to improve his record to 7-2 with a 2.63 ERA in 14 starts,1 the 21-year-old Australian received a surprise late-night phone call on June 30, 2004, from Seattle Mariners manager Bob Melvin.

“He said he had a proposition for me,” Blackley recalled. “He asked how would I like to pitch for him [on July 1]. I was calm. I said, ‘Good. Sure. Why not.’”2 After spending five hours attempting to reach his parents in Australia, Blackley slept for “about three hours” before making the short drive north to Safeco Field, arriving just 12 hours after learning of his promotion.3

His first start would be a day game, the finale of a four-game series against the Texas Rangers, who had taken two of the first three games. For the season, Texas had won 9 of 12 against Seattle while averaging more than 8 runs per game in their victories. The Rangers, with a record of 44-31, were 1½ games up on second-place Oakland in the American League West. Seattle was in last place in the division, 13½ games back, with a record of 31-45.

Showing no nervousness or negative effects from the lack of sleep, Blackley set the Rangers down in order in the first, including a strikeout of the first batter he faced, Eric Young Sr.

“Composure is one of his biggest attributes, not letting things bother him,” Melvin commented later. “He’s not a high-velocity guy, but he’s a command guy who pitches to both sides and he’s not afraid to come inside.”4

The Mariners quickly staked their young left-hander to a 3-0 lead in the bottom of the first against Texas starter John Wasdin, who was making just his fourth start of the season after spending time in the minors. The nine-year veteran was 1-0 with a 5.00 ERA.

Ichiro Suzuki, who would collect 262 hits in 2004 to break George Sisler’s 84-year-old single-season record of 257 hits, led off with a single and scored when Randy Winn doubled to deep right field.

After Wasdin recorded two outs, Bret Boone came through with an RBI double to drive in Winn. Boone scored on Dave Hansen’s line-drive single to center. Wasdin walked Rich Aurilia and Scott Spiezio to load the bases but retired Pat Borders on a fly to center field to escape further damage.

Blackley breezed through the next two innings, retiring the first eight Rangers he faced before walking catcher Ken Huckaby, who was playing for the first time since June 17.5

The Mariners expanded their lead to 7-0 in the bottom of the third. Boone led off and reached on a dribbler that Huckaby bobbled for an infield single. After Hansen walked, Boone moved up on Aurilia’s fly out to right field and scored on Spiezio’s single.

With two outs, Suzuki’s double to right — his third hit in three innings — scored Hansen, moved Spiezio to third, and knocked Wasdin from the game.

Ron Mahay came in for relief and gave up a single to Winn on a groundball back up the middle. Spiezio and Suzuki scored. Both runs were charged to Wasdin, who allowed seven earned runs while giving up eight hits and three walks.

In the Rangers fourth, Michael Young opened with a double, and Alfonso Soriano and Herbert Perry walked to load the bases with no outs. It was around this time, Blackley said, that he realized the magnitude of this game for him.

“When it started to sink in was the middle of the game — the fourth inning or so,” he recalled after the game.6

Facing his first adversity as a major leaguer, Blackley limited the damage to a single run. Young scored when Mark Teixeira grounded into a 6-4-3 double play. Then Hank Blalock flied to center field, ending the inning.

After allowing singles to Kevin Mench and Gary Matthews Jr. to open the fifth inning, Blackley again worked out of a jam. He struck out Huckaby and induced a fly out by Eric Young and a popout by Michael Young.

Blackley appeared headed to an easy sixth inning when he quickly retired Soriano and Perry on fly balls. But Teixeira and Blalock singled, and Mench hammered a three-run homer to left field to make the score 7-4.

Veteran left-hander Ron Villone replaced Blackley, who left the mound to a standing ovation from the crowd of 35,966.7

“Very impressive effort,” said his manager, Melvin. “Especially against a team like this. If you’re watching the box scores — and watching our team against these guys and the way they swing the bats against us — they can be a little intimidating.”8

Opposing manager Buck Showalter was also impressed, “You can see why they like him. He’s got good stuff. He was impressive. He was wildly effective.”9

Villone and Shigetoshi Hasegawa held the Rangers hitless the rest of the way, and Edgar Martinez drove in the game’s final run with a pinch-hit single to center field in the sixth that scored John Olerud.

The Mariners knocked out six doubles among their 12 hits in the game, including two each by Suzuki and Boone. Winn had two hits and drove in three runs.

But the day belonged to Blackley. The win made him the sixth Seattle pitcher to win his major-league debut — the first since Joel Pineiro in the first game of a doubleheader on August 8, 2000.10

“Not too bad,” Blackley said after the game. “I didn’t have any filthy pitches that were just awesome today. I just went as good as I could with what I had, and it worked.”11

Later he added, “It was an adrenaline rush. I didn’t feel tired at all. I could do it again.”12

Despite solid numbers in the previous three years in the Mariners minor-league system — he was 17-3 with a 2.61 ERA with the Double-A San Antonio Missions in 2003 — Blackley would not win again with the Mariners in 2004 in five more starts. He finished the season 1-3 with a 10.04 ERA.

After missing the entire 2005 season because of injuries, Blackley did not appear in the major leagues again until 2007, when he had a 7.27 ERA in 8⅔ innings in two games with the San Francisco Giants. He then bounced around in the minors for five organizations and spent a year playing in Korea before finally resurfacing in the majors in 2012.

Blackley’s second major-league win would not occur until almost eight years after the first one. It came on June 15, 2012, when he allowed two runs in six innings for the Oakland A’s in a 10-2 win over the San Diego Padres.

5 Huckaby was just 4-for-23 for the season in seven games. This was his last game with Texas before being waived and claimed by Baltimore on July 6. In August he was released by the Orioles and re-signed with Texas, appearing in eight more games with the Rangers.

7 Including the author and his high-school buddy.