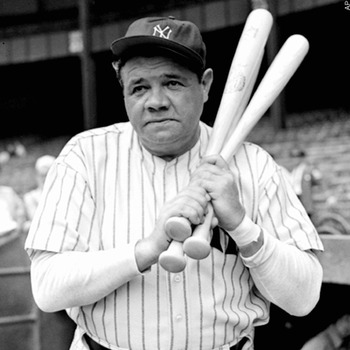 Babe Ruth spent 15 years of his 22-year major-league career with the New York Yankees. His career began in 1914 with the Boston Red Sox, where he was a standout pitcher until the end of the 1919 season. His contract was then sold to the Yankees in 1920. After the 1934 season, the Yankees and Boston Braves arranged a deal for the 40-year-old Ruth to go to Boston in various capacities, one of them as “assistant manager.”1

In his 15 years with the Yankees, Ruth had hit 659 home runs, with many milestones. He slugged 60 homers in 1927, the last one coming off Tom Zachary of the Washington Senators on September 30. The Babe hit his 500th career home run off Willis Hudlin of the Cleveland Indians on August 11, 1929, and his 600th off George Blaeholder of the St. Louis Browns on August 21, 1931.

Ruth mashed career home run No. 700 on July 13, 1934, off Tommy Bridges of the Detroit Tigers. On that notable day, the Yankees sent Red Ruffing to the mound to face Bridges. Both Bridges and Ruffing had identical 4-2 records in their last six games. Ruffing would finish the year with 19 wins and 11 losses; he also pitched in the All-Star Game. Bridges finished the year with a record of 22 wins and 11 losses and a league-leading 35 games started, and was an American League All-Star selection, though he didn’t get into the game.

Detroit was also loaded with talent in 1934 and went on to its first American League pennant since 1909, although they lost the World Series to the St. Louis Cardinals in seven games. The Tiger lineup had hitters like Goose Goslin, Charlie Gehringer, Hank Greenberg, and player-manager Mickey Cochrane, all of whom were later elected to the Baseball Hall of Fame.2

As Bridges and Ruffing got down to work that Friday the 13th afternoon in front of the crowd at Navin Field, the Tigers were a scant half-game ahead of New York in the American League standings.

There was no scoring in either the first or the second innings, although the Yankees came close in the top of the second. Gehrig and Ben Chapman singled to lead off the frame. Dickey’s line drive to right field was turned into a double play when Gehrig was caught off second. Chapman stole second and Frank Crosetti walked. Bridges threw a wild pitch that advanced Chapman to third and Crosetti to second. Bridges ended the threat when he got Don Heffner to fly out to center.

Gehrig left the game with one out in the bottom of the second, plagued by lumbago.3 Third baseman Jack Saltzgaver replaced Gehrig at first, Frankie Crosetti moved from shortstop to third and newcomer Red Rolfe went in to play shortstop, batting in Gehrig’s cleanup spot in the lineup. The Iron Horse’s lumbago created serious doubt as to whether his consecutive-game streak, now at 1,426, could continue.4

The Tigers got runners to second and third with one out in the bottom of the second on a double by Greenberg and a single and stolen base by Cochrane, but Marv Owen popped out to second and Bridges grounded to shortstop.

Ruffing struck out to begin the Yankees’ third. Earle Combs singled to center field and Saltzgaver struck out. Ruth hit next and drove a Bridges pitch well into the right-field bleachers for his 14th home run of the season, No. 700 of his career, giving the Yankees a 2-0 lead.5

In the bottom of the third inning the Tigers made the score 2-1 when Jo-Jo White scored on a high fly to second base by Gehringer.6

The game remained 2-1 Yankees, despite scoring chances by the Yankees in the fourth inning and the Tigers in the sixth inning. In the Yankees’ fourth, Dickey led off with a single but was picked off first. Heffner singled to center with two outs and advanced to second on a wild pitch, but was left there when Ruffing flied out. As for Detroit in the sixth inning, Billy Rogell hit a one-out single. He advanced to second on a groundout and Cochrane walked. But both were left on base when Owen struck out.

New York came to bat in the bottom of the eighth inning still leading 2-1. Ruth walked with one out, and Rolfe’s single sent him to second base. Rolfe was picked off first base, but Chapman drew a two-out walk. Bill Dickey’s double to center scored Ruth and Chapman, and it was now 4-1 in favor of the Yankees.

Detroit made it 4-2 in the bottom of the eighth inning when Greenberg’s triple scored Rogell. Ruffing retired the Tigers in order in the ninth.

Ruth hit eight more home runs as a Yankee after this game, with his final pinstripes round-tripper run coming on September 29, 1934, against the Washington Senators’ Syd Cohen in an 8-5 Senators victory. His first home run in the National League came off the Giants’ Carl Hubbell on April 16, 1935; in a 4-2 Braves win on Opening Day. His final home run, one of three he hit that day, was off Guy Bush May 25, 1925, in an 11-7 Braves’ loss to the Pirates at Forbes Field.7

Gehrig, meanwhile, managed to preserve his consecutive games streak the next day with the help of some creative lineup-juggling. He was penciled in at shortstop and led off the game against the Tigers with a single to right. He was immediately replaced by pinch-runner Rolfe, who also took Gehrig’s place at shortstop. The following day, the Iron Horse returned to the lineup full-time. He bashed three doubles, but the Yankees fell to the Tigers, 8-3.

In addition to the sources cited in the Notes, the author consulted the Baseball-Reference.com and Retrosheet.org websites, Robert Creamer’s Babe: The Legend Comes to Life (New York: Simon & Schuster, 1992), and Leigh Montville’s The Big Bam: The Life and Times of Babe Ruth (New York: Doubleday, 2006).