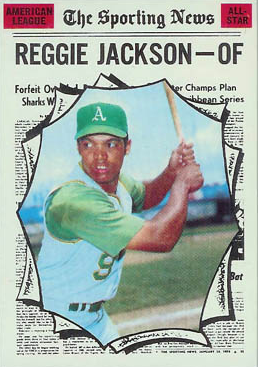 By the end of the 1960s, it seemed that the Major League Baseball All-Star Game had turned into an annual exhibition of National League dominance. The senior circuit had won 11 of 13 games during the decade (two games were played in 1960, 1961 and 1962; one game was tied when it was called because of rain). The first All-Star Game of the 1970s proved to be more of the same. Indeed, the final lingering image from Cincinnati’s Riverfront Stadium was Pete Rose barreling over catcher Ray Fosse to score the winning run. It was an era in which the games were fiercely contested battles for pride and supremacy, played between two leagues that despised each other. The 42nd version of the midsummer classic took place July 13, 1971, at Detroit’s venerable Tiger Stadium. It was a night that the American League finally got some revenge.

It was an All-Star Game in the truest sense of the word. The National League squad featured 12 future Hall of Famers: Willie Mays, Hank Aaron, Willie Stargell, Willie McCovey, Johnny Bench, Ron Santo, Lou Brock, Roberto Clemente, Steve Carlton, Ferguson Jenkins, Juan Marichal and Tom Seaver. (Pete Rose also played in the contest; in 1989 he was found to have bet on baseball games, and was made permanently ineligible for induction.) Among the American League stars were nine future Hall of Famers: Rod Carew, Carl Yastrzemski, Frank Robinson, Brooks Robinson, Luis Aparicio,   HarmonvKillebrew, Reggie Jackson, Al Kaline and Jim Palmer. Both skippers, Sparky Anderson and Earl Weaver, are Hall of Fame managers. One of the National League coaches, Danny Murtaugh, is also enshrined in Cooperstown, as a manager. Joe Torre, the 30-year-old St. Louis Cardinals third baseman who was having an MVP season in 1971, later gained entrance to the Hall for his great career as a manager, primarily with the New York Yankees. Doug Harvey, the third-base umpire, also has a plaque in Cooperstown (Incidentally, the second-base umpire for the game was Jake O’Donnell. This was only his third year of umpiring in the big leagues, and he retired after the end of the season. He later went on to a long career as an NBA referee, and became the only player to officiate in both a Major League Baseball All-Star Game and an NBA All-Star Game.)

Perhaps the most talked-about All-Star was the starting pitcher for the American League, Vida Blue. The 21-year-old fireballer from Louisiana had become the best pitcher in all of baseball. His phenomenal first half with the Oakland A’s included a record of 17 wins against only 3 defeats, 188 strikeouts in 184 innings, and an ERA of 1.42. The National League hurler was 26-year-old Dock Ellis, who had fashioned a 14-3 record for the Pittsburgh Pirates, with an ERA of 2.11.

During the pregame player introductions, the biggest cheers from the crowd of 53,559 were given to the hometown Detroit representatives: Norm Cash, Bill Freehan, Mickey Lolich and Kaline (as well as Tigers manager Billy Martin, who was selected as one of the coaches for the game).

It was a hot night, and a 25-mph wind was blowing out to right field, so despite the fine starting pitchers, the game promised to have more than a few long balls. This was, after all, Tiger Stadium, a hitter’s paradise. By game’s end, there were six home runs hit by six different players, all of whom made it to the Hall of Fame: Johnny Bench, Hank Aaron (his first in 58 career All-Star at-bats), Reggie Jackson, Frank Robinson, Harmon Killebrew and Roberto Clemente. In fact, home runs accounted for all the scoring in the contest. The six clouts by six different players tied an All-Star Game record matched by the 1951 classic, also at Tiger Stadium (then known as Briggs Stadium). Frank Robinson’s blast was noteworthy, as it made him the first player to hit a home run for both leagues in All-Star competition. Clemente’s round-tripper was his final at-bat in a midsummer classic.

But it was Reggie Jackson’s home run that stole the spotlight on this night, and remains one of the most enduring moments in All-Star Game history. It came in the bottom of the third, with the American League trailing 3-0. Luis Aparicio was on first base after having led off with a single, only the second hit for the junior circuit. Reggie Jackson of the A’s was sent to pinch-hit for Blue. This was the 25-year-old’s second All-Star Game appearance, having gone 0-for-2 in the 1969 competition. Jackson swung at Ellis’ offering and sent a high, soaring rocket into deep right field that would have left the park had it not hit a light tower and fallen back onto the playing field.

Tigers broadcaster Ernie Harwell called it the hardest-hit ball he’d ever seen. Longtime Detroit baseball columnist Joe Falls wrote, “Who will ever forget Reggie Jackson’s drive? I saw it when he connected, and right away I thought it was going out of the park. I lost it when it got up into the sky, and was disappointed when I saw it falling back to the field after striking the base of the light tower. You can’t hit a ball much harder than Reggie Jackson hit it.”1 Kaline, who had seen his share of shots at Tiger Stadium, observed, “It was the hardest hit ball I’ve ever seen in my life, here or anywhere else.”2 Senators slugger Frank Howard, also known for his titanic blasts, was in awe: “I think it would have gone 600 feet. ... He crushed it.”3

Jackson himself agreed. “I think this would have to be the longest one I’ve ever hit,” he noted after the game.

The final score was American League 6, National League 4, played in a brisk two hours and five minutes. Vida Blue, while unspectacular (giving up three earned runs in three innings), picked up the win. Frank Robinson was named the game’s Most Valuable Player.

Kaline went 1-for-2 in front of the hometown folks. He singled to center in the sixth and scored on Killebrew’s home run. Cash and Freehan went a combined 0-for-5. Lolich pitched the final two innings for the save, giving up only Clemente’s round-tripper.

2 Lowell Reidenbaugh, “Everyone Except Reggie Electrified By His Clout,” The Sporting News, July 31, 1971.