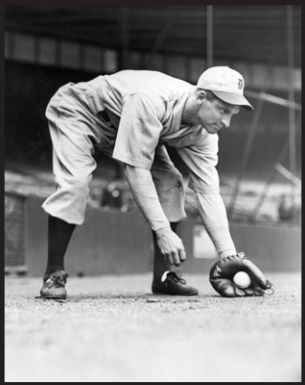 The 1934 season began with minimal fanfare for the Detroit Tigers outside of Corktown. The Washington Senators were projected to repeat as American League champions with the Bengals expected to come in behind the New York Yankees and Boston Red Sox in fourth place. Despite this, new player-manager Mickey Cochrane was entirely optimistic. “We have as good a chance as any club,” he insisted.1 Second baseman Charlie Gehringer reiterated his manager’s optimism, calling the 1934 squad “the best in ten years.”2

A 6-2 start saw the Tigers near the top of the American League at the end of April. By the 13th of May they had slipped to 5½ games behind New York. But a 14-7 stretch enabled them to catch the Yankees on June 5.

The two teams then swapped the lead back and forth for the next month. But with Lou Gehrig, Babe Ruth, and Lefty Gomez still producing, Detroit would have to play determined baseball to keep pace. A key four-game series in Detroit starting on Thursday, July 12, could prove decisive in determining the fates of both clubs. The Tigers were only a half-game behind the Yankees.

The series lived up to its potential from the start. The Tigers took the first game, 4-2, with Schoolboy Rowe giving up only six hits for his 10th win of the season. Babe Ruth went 0-for-4 and was said by a writer covering the game to have been lacking his “old wrist slap.”3 The Yankees fought back the next day, however, with a 4-2 victory of their own that saw Gehrig leave in the second inning with “an attack of lumbago.”4 Ruth shook off the previous game by hitting his 700th home run. As Saturday approached, the Yankees still held a half-game lead over the Tigers.

A crowd of 22,500 crammed into Navin Field with some even sitting in temporary bleachers set up along the warning track, which meant special ground rules had to be established. The New York Times sportswriter covering the game was not pleased with this special arrangement, stating that Babe Ruth was “almost impaled on one of the temporary fence posts,” and referring to the seating as “unnecessary” and “only complicating matters.”5

Lou Gehrig had a short day’s work on Saturday, starting at shortstop instead of his usual first base, leading off with a single, then being lifted for a pinch-runner so he could return “to his hotel quarters.”6 This was Gehrig’s 1,427th consecutive game. It was clear that the lumbago that had been hampering him the day before had not yet subsided. The Yankees followed Gehrig’s hit with three more and scored four runs before the inning was out. Tigers starting pitcher Vic Sorrell, who pitched his entire major-league career wearing an Old English D, was relieved after just one-third of an inning and replaced with Elden Auker.

“Ruppert’s Riflemen” continued their offensive onslaught in the third inning when third baseman Frankie Crosetti singled in two more runs to extend the Yankees’ lead to 6-0. After a Charlie Gehringer single brought in Goose Goslin with the Tigers’ first run, Babe Ruth returned to bat for the Yankees in the fourth inning and, with two men on, sent an Auker offering into the Tigers faithful to give the Yankees a 9-1 advantage. The home run was the 701th of his career and the last one he hit at Navin Field.

With an eight-run cushion, all seemed to be going the Yankees’ way, especially with their ace, Lefty Gomez, on the mound. The 1934 campaign was Gomez’s finest as he finished the year with career records in wins (26-5) and earned-run average (2.33). When the fourth inning began, however, the tide turned in favor of Detroit. Hank Greenberg led off with a double and helped the Tigers tally three runs to cut the Yankees’ lead to five runs. The fifth inning started just as well for the Tigers as Gehringer and Billy Rogell led off with doubles. Yankees manager Joe McCarthy, having seen enough, replaced Gomez with reliever Jimmie DeShong. Gomez complained of having a cold and, as the New York Times reported, “pitched as if he had one.”7 DeShong, in his first full season with the Yankees, induced Greenberg to pop out to first and Cochrane, who had inserted himself into the lineup as a pinch-hitter, to ground into a double play and end the Tigers’ threat. With another run in, however, Detroit had reduced the Yankees lead to four runs, at 9-5.

The sixth inning saw the third hit of the game by Tigers center fielder Gee Walker. Known for his speed and tenacity on the bases, Walker was labeled by Cochrane as “my type of ball player.”8 His speed could get him into trouble, however, and only two weeks earlier, it nearly cost him his job. On June 30 Walker was picked off of second base in a loss to the St. Louis Browns, causing Cochrane to suspend him and nearly cut him from the roster.9 The Tigers players voted to bring Walker back despite their manager, who was “angry and sputtered like a wagon load of lighted cannon crackers” at Walker’s recent play.10 Gee’s presence in the lineup benefited the Bengals this day, however, as not only did his double score two runs, but he came home later, capping a three-run Tiger sixth inning.

With the seemingly insurmountable eight-run lead cut to a single tally, Cochrane sent pitcher Chief Hogsett to the mound. Hogsett, who was given the nickname “Chief” because he roomed with a Kiowa Indian,11 gave up a double to Bill Dickey, threw a wild pitch, and watched Frankie Crosetti drill a home run into the stands before giving way to Firpo Marberry. The Yankees threatened but Marberry held them scoreless the rest of the game. The score read 11-8 in favor of the Yankees going into the bottom of the eighth inning, but the Tigers, who the Free Press reported won a game “simply because they refused to stay licked,” were not ready to give up.12

The Tigers seemed poised to take the lead in the eighth inning when they loaded the bases. On third was leadoff hitter Ervin Fox, whose nickname, Pete, was borrowed from Peter Rabbit, a reference to his speed.13 On second was Goose Goslin, acquired by Cochrane from Washington before the season started in the hopes that his veteran experience on three championship teams would rub off on the young Tigers.14 Walking to first was Billy Rogell, who would go on to have a personal-best season with 114 runs scored, 100 runs batted in, and 175 hits.15 Stepping to the plate was perhaps the most dangerous of the Tigers’ “G-Men,” Hank Greenberg. The team could have used one of Greenberg’s home runs during this at-bat, but he could only muster an inning-ending groundout to shortstop Red Rolfe. Despite this setback, the Tigers had one inning left.

Yankees reliever Russ Van Atta started the ninth and surrendered back-to-back hits to Marv Owen and Mickey Cochrane. In the pitcher’s position of the lineup, Marberry was removed in favor of another pitcher, Schoolboy Rowe, who delivered a single that loaded the bases. A Pete Fox fielder’s choice brought Owen home to close the gap to 11-9. New York, in need of a stopper, inserted veteran Burleigh Grimes, one of the few remaining pitchers in major-league baseball still allowed to throw a spitball. After Walker sacrificed, Goslin lifted a double that tied the game. With the crowd still in a fever pitch, Gehringer was walked for an attempted force out of Goslin, who stood on second base as the winning run. Billy Rogell, who had been stranded on first the previous inning, now had the chance to become the hero. The Tigers shortstop delivered by slapping a base hit through the left side. “I only got to first base. I was jumping up and down, yelling, ‘Run Goose! Run, Goose!’”16 Goslin scored the final run of the game to give the Tigers an incredible 12-11 victory and sole possession of first place in the American League, a position they would not relinquish for the remainder of the season as they advanced to their first World Series since 1909.

After the game, H.G. Salsinger of the Detroit News called this “the most exciting game ever played at Navin Field.”17 The Detroit Free Press reported that “old men wept and muttered ‘not since 1909.’”18 The New York Times reported that Tiger fans went home “joyous to the point of delirium with hopes of the city’s first pennant in twenty-five years.”19 On this day, the Tigers had showed that 1934 would indeed be their year. They had shown “by anyone’s count that they were champions for the day, if not for the season.”20

14 William Anderson, The Detroit Tigers: A Pictorial Celebration of the Greatest Players and Moments in Tigers History, fourth edition, 63-64.

16 Richard Bak, A Place for Summer: A Narrative History of Tiger Stadium, 157.